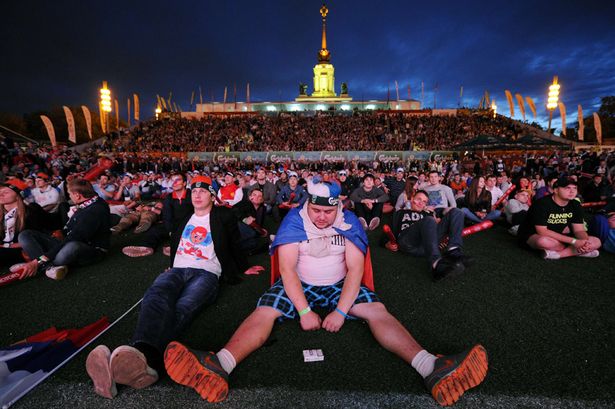 2014 – A most forgettable year in Russian football

The Russian football world was optimistic when 2013 turned into 2014. The national team had qualified for the first World Cup since 2002, and this was a perfect opportunity to test the team that could bring glory to Russia at the 2018 World Cup on home soil, and the Russian and Ukrainian clubs were discussing a joint league which could make the biggest clubs financial sustainable and bring them financially closer to Western European clubs. So what went wrong and why will 2014 forever be remembered as a terrible year for Russian football in general?

2014 kicked off in Israel when Zenit Saint Petersburg and CSKA Moscow faced Ukrainian Metalist Kharkiv and Shakhtar Donetsk in a training tournament, better known as the Unified Tournament or the G-Drive United Tournament, in February. The tournament was a joint Super Cup with the two best teams from Russia and Ukraine, and it was supposed to be a test for the possible fusion between the Russian and Ukrainian Premier League. This venture was let by the so called Gazzaev Group, led by the former CSKA and Alania coach Valery Gazzaev, and supported by energy giant Gazprom. 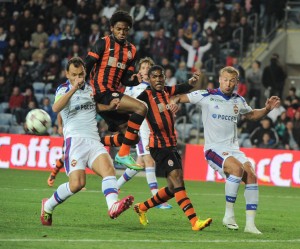 Unified action at the G-Drive Tournament

Despite the support from several prominent football people in Ukraine, the idea of a Unified League was mainly a project led and backed by Russians. A poll from October 2013 showed that only 35% of Ukrainian football fans supported the idea. This was, however, still more positive than the President of Ukraine’s Football Federation, Anatoly Konkov’s statement earlier that year:

“I believe that any actions directed toward creating any kind of league or other unifications of clubs without our express permission are an unprecedented violation of the statutes of FIFA, UEFA and the UFF, and will be viewed in the context of taking measures for disciplinary responsibility.”

So while the Russians moved forward with the idea, the Ukrainians were more reluctant and waited for the approval from football authorities FIFA and UEFA. Not everyone in Russia supported the idea though, for example the country’s Minister of Sport, Vitaly Mutko, preferred to spend the financial resources on Russian football instead of focusing on other creating a new league with foreign clubs.

Russia’s annexation of Crimea, and the following unrest in Eastern Ukraine quickly developed into a major obstacle for the forces behind the joint league, but it still has the support from most of the big clubs, and Gazzaev, the public face of the championship’s organizing committee, still believes in the idea. In an interview with the Russian sports paper Sport-Express he stated that football had unifying abilities, and that the war in Ukraine never would have started if the league had existed a year ago. The creation of a joint league is politically unlikely at the moment, but the idea still lives on in both nations, even though the political climate makes it difficult for Ukrainians to publicly support it.

Zenit Ultras: A most violent year


The Russian championship race was one of Europe’s closest, with Zenit, CSKA and Lokomotiv all able to win the title before the last game week. Unfortunately, the race turned ugly in the second to last round, when Zenit’s fans invaded the pitch and assaulted Dinamo Moscow’s players in Saint Petersburg, when Zenit were behind 4-2 and thus losing their first place to CSKA. Dinamo defender Vladimir Granat had to leave Petrovsky Stadium in an ambulance and he was later diagnosed with a concussion after he took a hit to the face from a Zenit supporter.

Zenit’s answer to the riots came quick, when they in an official statement on their website wrote:

“Unfortunately, this is not the first time that fan groups have caused damage to Zenit’s reputation. This forces the club to change its approach to further interaction with such fan groups.” 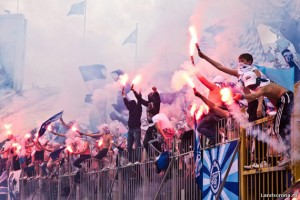 Zenit were punished with a 3-0 defeat, a €100.000 fine, two home games without spectators and another three without fans in the ultras sectors. Maxim Mitrofanov, Zenit’s General Director, called the punishment harsh, but he also started a war against the ultras saying that the real fans were still able to watch the club play after the first two fixtures.

Eventually Zenit introduced age restrictions and an obligatory ID-card for the ultras section among other things, which led the biggest ultra-group Landscrona to boycott home games until a solution was found. In October the fans and club finally reached an agreement, where Zenit removed the age restrictions and the fans who had refused to renew their season tickets received a discount for the games they had missed.

The world cup tournament in Brazil ended as a massive disappointment for Russia which caused the national team lose much of its popularity, and at Russia’s first match after the World Cup merely 3500 spectators turned up to watch their countrymen play Azerbaijan in a friendly. This was the lowest attendance at a Russian national team home game since 1992, when Russia beat Luxembourg 2-0 at Luzhniki Stadium in Moscow in front of 3000 spectators. 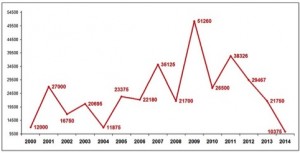 Average attendance at Russia’s national team games at home since 2000.

Around a third of the spectators at the game were from Azerbaijan, and without them the game would have stood as the worst attendance since the fall of the Soviet Union. One of the reasons behind the low attendance at Arena Khimki is of course the World Cup, but there are other significant reasons as well. The venue is one of them; Khimki lies in the outskirts of Moscow and combined with the awful kick of time at seven in the evening on a Wednesday it was obvious that many football fans would stay at home. Another reason is that the football fans in Moscow were already fed up, with quality football available from Champions League, Europa League and important national team qualifiers who all regularly visit the capital.

Former Vice-President of FIFA and current Honorary President of the Russian Football Union Vyacheslav Koloskov had another explanation for the humble attendance, when he accused the media criticism of Capello, RFU and the players of creating a negative atmosphere around the team which caused the fans to stay away.

The Western sanctions following Russia’s annexation of Crimea have hit Russian football hard. They have made the Russian rouble lose around 25% its value, which is terrible news for the Russian clubs, who pay their players in foreign currency.

Two Premier League clubs, Amkar and Rostov, as well as several lower ranked clubs are already struggling and their players and staffs have not been paid since this summer. Both Rostov and Amkar are, like many others in Russia, supported by the state, and they are now facing a reality where their budgets have been cut. In Rostov’s case one of the reasons is the city’s placement near the Ukrainian border, which have led to up to one million Ukrainian refugees coming to the towns’ refugee centers, and the money, who was supposed to go to the football club, helps the many refugees. According to Spartak Moscow’s owner Leonid Fedun at least five state sponsored Premier League clubs are in financial problems, and “the days of plenty are over”, as he told a journalist.

The fight against racism continues

When the Russian State Duma passed the Fan Law in January one of their aims was to banish racism from the Russian grounds, but 2014 had several incident, one of them even involved a referee, who, according to Hulk, said “I don’t like you, along with other black people” to him. The referee, Alexei Matyunin, later passed a polygraph lie detector test to prove his innocence. Some Russian commentators are now speculating whether the English press staged Hulk’s attack on Matyunin in their attempt to get the 2018 World Cup to England, and some have demanded Hulk to take a similar test. Another case involved Rostov’s head coach, Igor Gamula, who said that the club had “enough dark-skinned players. We’ve got six of the things”, when asked about transfer rumors about a Cameroonian defender. In the same interview Gamula made a highly inappropriate joke about ebola, because five of his players were sick at that time. Gamula was later handed a five-game suspension for his comments, while the black players in the squad threatened to strike.

Elsewhere in Russia the victims of racist abuse were punished, when both Dinamo’s Congolese defender Christopher Samba and Rostov’s Gabonese midfielder Guelor Kanga received multiple days bans because of “unpleasant gestures” towards the fans, who were abusing them. Torpedo Moscow’s fans who abused Samba had their sector closed for one game, while Spartak Moscow was fined 70.000 roubles, or 933 euros for their hatred towards Kanga.

Toke is a masters student of International Development Studies and Geography at the University of Roskilde in Denmark. Toke has since his young years enjoyed the stories about great Soviet footballers like Lev Yashin and Fyodor Cherenkov, which combined with an interest for the politics and history of the former Soviet Union, led to an intense passion for the Russian football world with all its beautiful madness. Toke supports his local Danish team Brøndby IF and describes himself as a football romantic. Follow him on Twitter @TokeTheilade
Features 1727 Russia 663