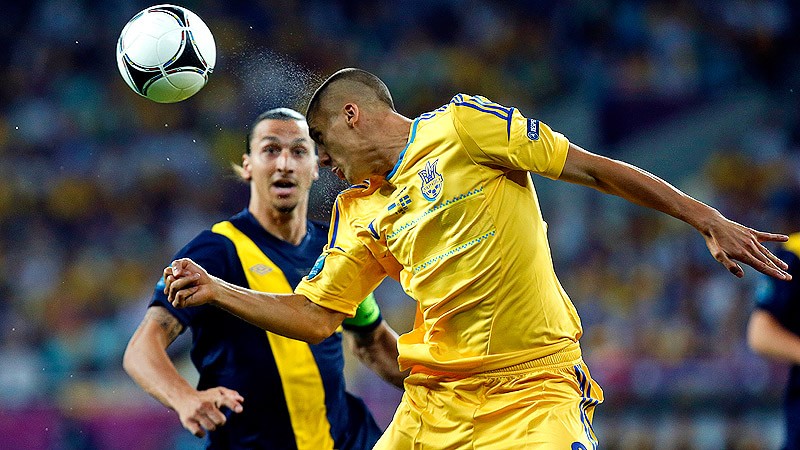 Finishing in ‘last place’ is by no means a slight on the Uzbek Ahmedov, who is one of three FK Krasnodar players to appear on the FGT30. Ahmedov’s true strength is his versatility as he is equally adept at playing in central defence, centre midfield, and right midfield. Ahmedov was one of the few players who survived the fire sale of Anzhi Makhachkala last summer, but was able to move clubs on a free transfer due to the relegation of the Dagestani-based club. For Krasnodar this appears to be a steal as Ahmedov now has a market value of €6 million and can be considered one of the most interesting players of the Russian Premier League, whose shooting power resulted in the Uzbek winning the goal of the tournament against Qatar at the 2011 Asian Cup.

Domagoj Vida was a disappointment in the Bundesliga playing for Bayer Leverkusen. When Bayer purchased the player in 2010 from NK Osijeck for €2.4 million club officials had high hopes for the young Croat. Vida however was either not ready for the Bundesliga or was played in the wrong position. Either way, he left Bayer after only one season for €1.3 million to Dinamo Zagreb in what proved to be a poor piece of business by the Germans. One year later Vida was on the move again this time to Dinamo Kiev for €5 million, with the move seemingly beneficial for both parties involved. Since the transfer, Vida has been outstanding for Kiev and has played a valuable role on why Dinamo Kiev appear to be a serious contender for this season’s Ukrainian Premier League title.

One of the many Brazilians at Shakhtar Donetsk, and had the FGT30 been judged on only European performances, where he has scored 3 goals in 6 games, the Brazilian would have been ranked even higher. But unfortunately for Teixeira it has been his average performances domestically that has seen him surprise a few, sitting at the relatively low 28th place. At the age of 18 Alex Teixeira achieved his breakthrough at Vasco da Gama in Brazil, and quickly became a hot commodity, with his name was linked with several European top clubs including Chelsea and Manchester United. But an exit clause worth $39 million at Vasco da Gama meant that many clubs shied away from the investment. It was therefore a surprise when the Brazilian ended up moving to Shakhtar for the relative small sum of €6 million, where a favourable agreement between the clubs and Teixeira’s agent Kia Joorabchian helped smooth the deal. For Shakhtar, Teixiera’s signing was a club codified investment in the future, with club officials hoping that Teixeira’s performance both domestically and in the Champions League will continue to improve, with Shakhtar’s philosophy grounded on generating profit from eventually selling on their young South American talent.

Is this the season for Artem Kravets? The striker who has scored nearly a goal every other game in the Ukrainian Premier League this year has seen a remarkable improvement since returning from a below average loan spell with city rivals Arsenal Kiev, where he only managed 3 goals in 10 games before the club went bankrupt. Kravets who made his debut for Ukraine in 2008, while still having failed to have broken into the first team at Dynamo, has perhaps realised that this is his final chance to make it at Ukraine’s most famous club.

The next Mkhitaryan? Perhaps not quite but the 26-year-old Romanian has been this season’s Ukrainian Premier League (UPL) sensation. Scoring 9 goals in 13 UPL games as an offensive midfielder is no easy at unfashionable Volyn Lutsk while his performances at Volyn have already earned him a call up to the Romanian national team. It is now only a matter of time when bigger clubs from Ukraine will try to lure him away from the its northwest.

Shovkovskyi is a relic and Dinamo Kiev’s only survivor of the team that dazzled Europe in the spring of 1999, when they narrowly missed out on the UEFA Champions League final in a breath-taking two-legged affair against Bayern Munich. Shovkovskyi has guarded Dinamo’s goal since 1993, and has accumulated 392 games for the club. In many ways 2014 has been a difficult year off the field for the keeper who has been an outspoken supporter of the Euromaidan movement, and has even offered to pay plane tickets for foreigners who have suggested that the protests on Kiev’s Maidan Square were organised by fascists and Banderists. At the same time Shovkovskyi has also criticised the new government for taking away Russian language rights. Despite his political involvement, however, the keeper has been steady for Dinamo this season. Perhaps it is even unfair to suggest that Shovkovskyi is a relic, but rather a memorial of the days Dynamo Kyiv wish to replicate sooner rather than later.

Sydorchuk is the FGT30 dark horse, a defensive midfielder, whose strong performances have allowed Dinamo Kiev’s offensive players to develop a game that has brought the side who have recorded the highest number of league titles during the Soviet Union back to the top of the table before the winter break. Sydorchuk’s good form since the summer earned him his first call up for the Ukrainian national team, where he made his first full debut against Belarus on October 9, scoring his first goal in added time, before adding another three days later, this time the winner in a 1-0 victory over Macedonia in Lviv.  In many ways the native of Zaporizhya has much in common with the last Ukrainian sheriff Anatoli Tymoshchuk. And while it is still too early to say whether or not Sydorchuk has the potential to develop his career in the same way as Tymoshchuk did, Dinamo Kiev have unearthed another young star, which will benefit both their return to the top of Ukrainian football and the ambitions of the Ukrainian national side.

Pyatov is a player often better remembered for his calamities and inconsistencies for both Shakhtar and Ukraine, which have often overshadowed his positive abilities, in a vein similar to England’s former number one David James It appears, however, that Pyatov has now made the next step in his development to become not only a talented keeper, but also one who his teammates can consistently rely upon. Pyatov will never be a top European keeper, and still struggles at times to control his box. That said Pyatov’s form means that he is ranked as the number one keeper in the FGT30, and higher than Russia number one Akinfeev, whose torrid displays at the World Cup and in the Champions League have seen him not even make the cut. At only 30, Pyatov’s relative youth for a keeper may see him further progress as his composure and maturity continues to grow.

If Andoni Goikoetxea was the Bucher of Bilbao then Khacheridi is the Kiev Crippler. Khacheridi’s ruthlessness in defence can be both a blessing and a curse, with the Ukrainian defender not-so-fondly remembered for his needless tackle on Frank Ribery in the World Cup 2014 qualification play-off game against France, in Paris; a match which saw Ukraine concede a comfortable first-leg lead. Injuries have meant that Khacheridi has only played a few games since the summer, but the son of an ethnic Greek father and a Ukrainian mother, is a true presence when fit with the potential to play in any one of Western Europe’s top leagues.

Gazinskiy, like his teammate Joãozinho (who is ranked in 20th position of the FGT30), has benefitted from the rise of FK Krasnodar in recent years. Born in Khabarovsk Krai in eastern Russia Gazinskiy could be no more different than the Brazilian; but there is little doubt that Gazinskiy compliments Joãozinho as the defensive midfielder’s work rate liberates the Brazilian to roam without having to worry about any positional responsibilities. The Russian arrived in Krasnodar from the then First Division club Torpedo Moscow in 2013, with his new club finishing fifth last season, thus qualifying for the Europa League. Gazinskiy is an unsung hero, which is reflected in his relatively low market value, and the type of player who receives little praise in the media. But the growing awareness of this type of player, “post-watercarrier” moment, has risen sharply as coaches are now beginning to stress the need to strike a balance in the midfield; or in other words, for every Edin Hazard, there should be a Jon Obi Mikel.

All statistics, average grades and values for Futbolgrad’s 2014 Top 30 Players are from the 2014/15 season are kindly provided by whoscored.com and Transfermarkt.de

By Manuel Veth and David McArdle