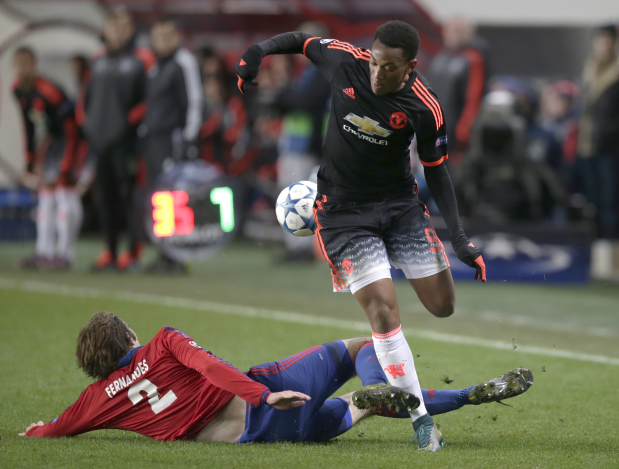 A Tactical Analysis of CSKA Moscow vs. Manchester United

With a combined age of 69, CSKA’s experienced centre back pairing of Sergey Ignashevich and Vasiliy Berezutskiy should have faced a torrid time against the youthful vigour and pace of Anthony Martial and Jesse Lingard on Wednesday night, but instead, it was another onfield battle that was crucial to the outcome. Mario Fernandes has been in sublime form in the Russian Premier League this season with his trademark incursions into opposition territory, and faced with an unorthodox full back in Marcos Rojo, the prospects of a fruitful evening were high for the Brazilian.

The formation that both sides utilised, their familiar 4-2-3-1, means that the wide positions are where the most impact was to be made. The difference between the two sides, however, came in their choice of wingers in the lineup. United’s €50 million summer signing Martial lined up on the left flank initially to face the flying fullback Fernandes in an intriguing battle of pace and discipline, with club captain Rooney as centre forward, in a reversal of Van Gaal’s previous deployment of the pair in domestic action. There is no question that Rooney has lost the electric burst of acceleration he once had, so his intelligence and strength were better used in the centre as a focal point for patient build up play. 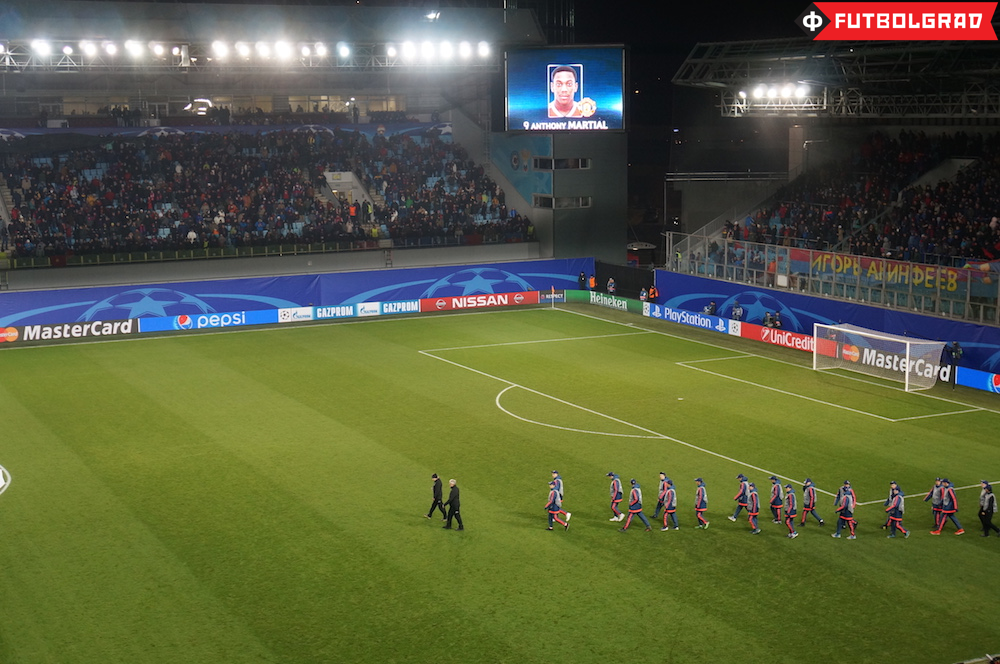 Martial being announced to the Khimki crowed – Image via Manuel Veth

On the right was Champions League debutant Jesse Lingard, the highly rated England youth international, and another player with pace to burn. The intent was clear—target the CSKA fullbacks. But after a few minutes, it became apparent that the plan was more specific than to simply bomb forward; Lingard was given license to roam over to the left flank alongside Martial, which he did as early as the third minute, in a clear attempt to pin back the marauding Fernandes with the two fastest players in the side.

Fernandes is known for his tendency to charge forward in attack, often to devastating effect, especially with former Red Devil Zoran Tošić in front of him. As many managers choose in the modern game, the right-sided wide player is in fact left footed, as in the case of Tošić, which allows him to cut inside onto his stronger foot. Arjen Robben has made a career out of wrongfooting defenders this way, and United’s scouting department couldn’t have failed to pick up on this feature of CSKA’s play. The combination of Tošić cutting inside and Fernandes pushing high up the pitch in attack leaves a huge amount of space to exploit in the space left behind. 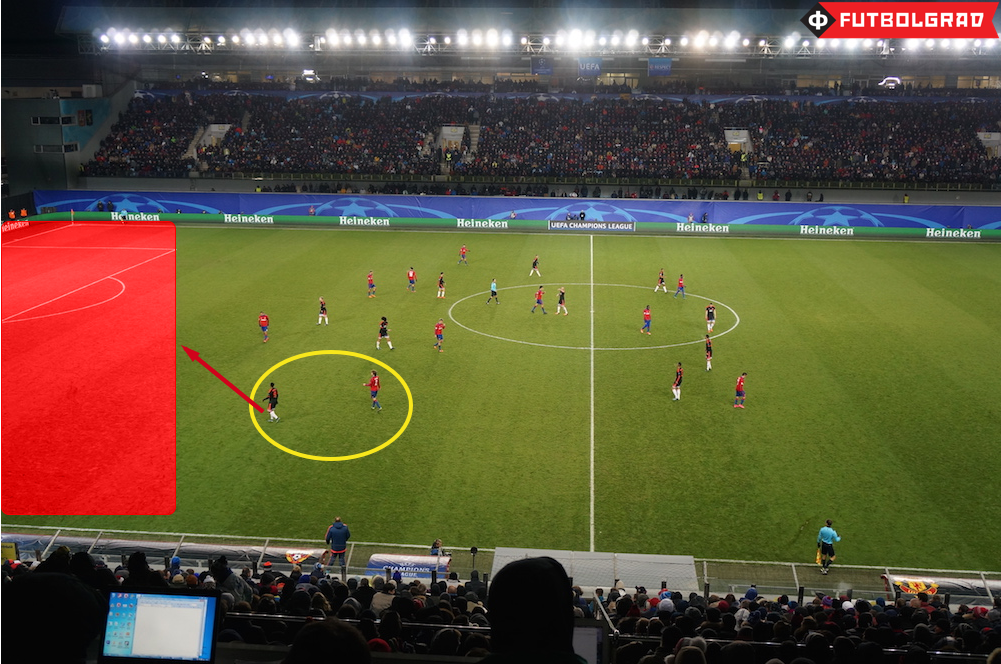 Fernandes likes to press up high, which should have given Martial space to attack – Image via Manuel Veth

What was interesting was how Martial was deployed without possession. The 19-year-old is an out and out attacker, and has next to zero defensive instincts or experience. In his blossoming career so far he has rarely been challenged by foreign opponents; indeed, of the 83 professional matches to his name, only five came outside his home country before he joined United in August. But, it was clear he had been instructed to do his share of defending by sticking as closely to Fernandes as possible, which he was not inclined or equipped to do effectively. As a result, Fernandes was free to continue attacking, knowing that he was leaving Martial in behind him as he went forward. Pontus Wernbloom was quietly effective in mopping up in front of the defence, and this included occasionally drifting across to cover the right side of defence.

It was apparent that Martial was uncomfortable in this unusual role, and it left him out of position, unable to benefit from his speed in sharp counter attacks. Futbolgrad’s reporting team couldn’t help but notice in their tactical analysis how much more effective it would have been to instruct him not to track back at all, but to do the complete opposite. As soon as it became clear that he wasn’t going to be of much use stopping Fernandes, surely the best option would have been to expose Fernandes’ boldness by either taking direct advantage on the counter or by forcing the fullback to track back himself, thus relieving Rojo of a major threat and shifting the emphasis onto CSKA defending.

What helped the hosts significantly was the passing ability of Sergey Ignashevich. The stalwart stroked numerous passes into the channels inside both fullbacks, with the pick of the bunch being one in the second half that switched play rapidly from right to left; not an agricultural hack to the corner flag, but a flat, dipping bullet that found Ahmed Musa without forcing the Nigerian to break his stride. The days of British kick and rush are fortunately long gone, but in an era of fashionable possession-obsessed football, it was refreshing to see a practical and effective element implemented into the framework of a packed midfield. 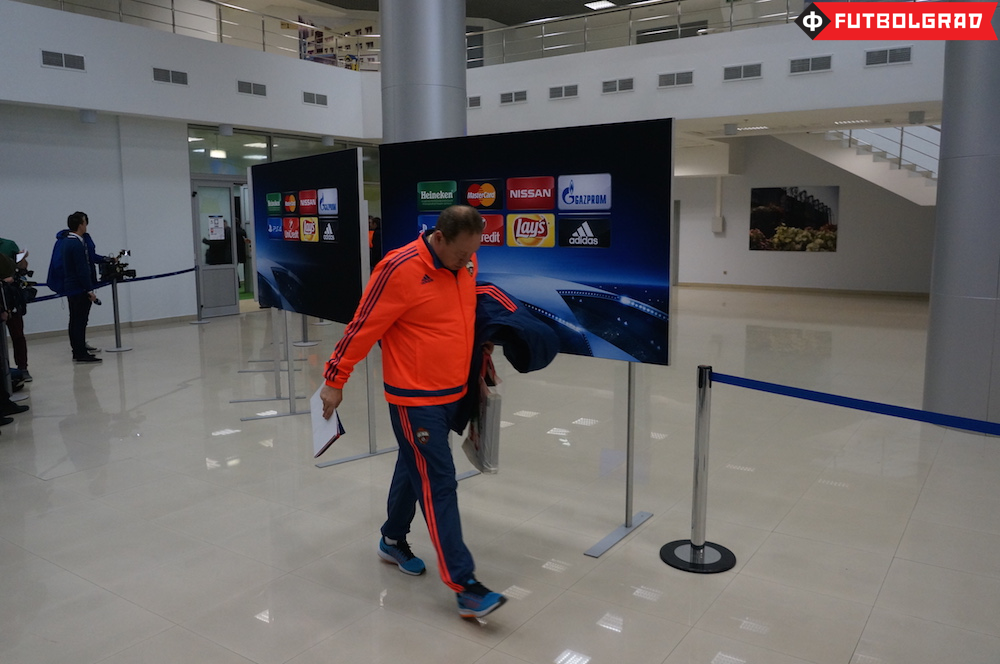 In the second half, there was a noticeable change in Martial’s role. While he stayed wide left, he stayed further forward without the ball, and the danger from Fernandes was significantly reduced as he was forced to track the young Frenchman. The teenage forward’s confidence grew quietly, and after the hour mark, with Fernandes occupied by Marouane Fellaini, he swooped in between Ignashevich and the Brazilian to glance home the equaliser. His innate instinct in the box was of course a substantial reason for his goal, but it was also down to the greater time spent facing the CSKA back line rather than tracking back. 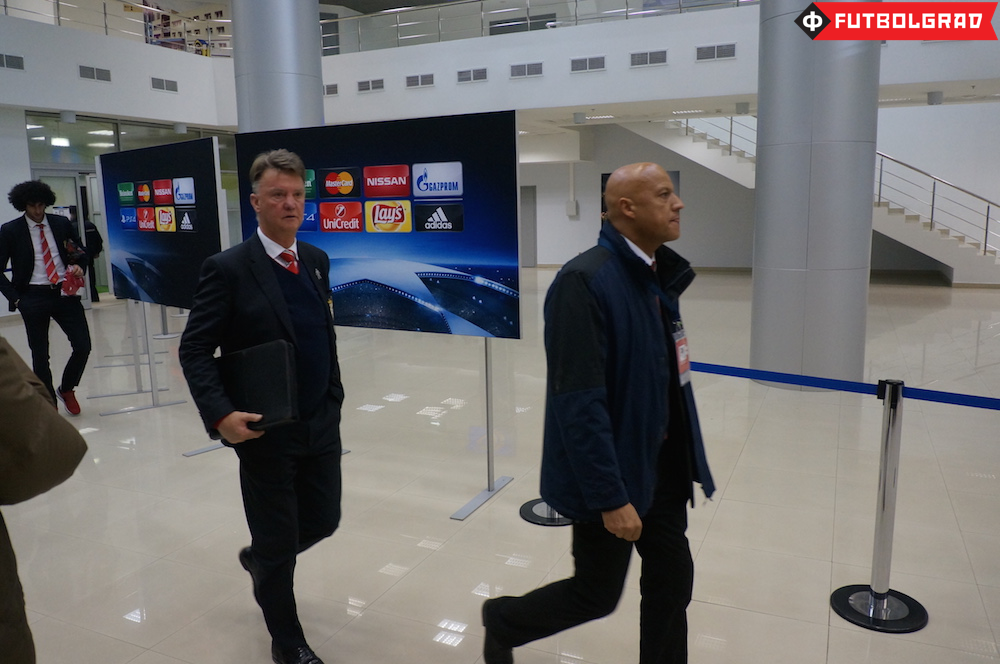 It will have concerned Louis Van Gaal that his defence was caught out so often by a simple lofted pass for an overlapping full back to run on to, but Martial’s greater effectiveness in the second half, while not necessarily in the form that he was bought to demonstrate, will have given him great heart. There should be no shame on Slutskiy’s part for employing a form of long ball tactics to outfox the opposition—it was an ideal way to get the best out of his own players, and very nearly earned a remarkable win.