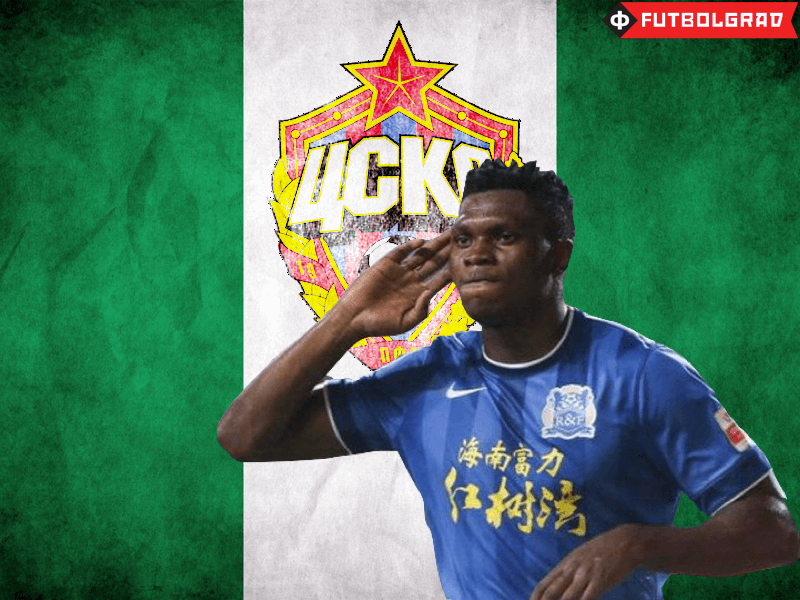 Aaron Samuel Olanare – A Super Eagle Made in China

These days it is a rare occurrence that a young and talented striker would move from a Chinese Super League team to the Russian Football Premier League. Indeed this winter China’s highest competition has spent more than any other league on new players, and in the case of Alex Teixeira a Chinese club was even able to outbid English Premier League team Liverpool FC.

Hence, it is major news that CSKA Moscow, which has been linked to various strikers in recent weeks including Luiz Adriano, Rubin Okotie, and Sébastien Haller, has now signed the replacement for Seydou Doumbia – the young Nigerian striker Aaron Samuel Olanare from the Chinese Super League team Guangzhou R&F.

CSKA Moscow had first voiced their interest in the Nigerian striker last year, but back then Guangzhou R&F had asked for €5 million for Olanare. Furthermore, Olanare was also reluctant to take a wage cut.

The situation, however, has changed over the last year as Olanare felt that Guangzhou were not using him in the right position as a central striker, and that his development was stalling in China. The new situation meant that Olanare was now willing to leave China.

The fact that Olanare’s contract will expire in December 2016 meant that Guangzhou would have to sell the striker no later than the summer or risk losing him on a free transfer, meant that CSKA Moscow were in a favourable negotiation position, and were able to sign Olanare on a free loan deal for the rest of the season. In the summer CSKA Moscow have the option to make the deal permanent at the end of the season for a relatively small fee, which is thought to be between €1 million and €1.5 million.

For CSKA Moscow the 21-year-old Olanare seems to be an ideal solution for the Red Army club, who have had only one proven striker left on contract. The young Nigerian striker is 189 cm tall, and is described as the perfect athlete by Sport-Express, which stated that CSKA Moscow had always hoped for a striker who could combine strength with athleticism.

The above YouTube video highlights that the Nigerian possesses an impressive array of skills. He is a fantastic dribbler, with a good sense of his positioning on the field; he has a strong left foot, and despite his height can always find space for scoring in tight positions. His athleticism means that he is strong both on the ground, as well as in the air. Olanare celebrates his goals by doing an acrobatic somersault, which has lead to comparisons with the German striker, and World Cup winner, Miroslav Klose.

Olanare might even be an upgrade on the recently departed Doumbia. Doumbia’s play was often comparable to the play of CSKA Moscow’s Nigerian striker Ahmed Musa. Both Musa (170cm) and Doumbia (179 cm) are relative small strikers. While Olanare’s attributes on the ground are similar to those of Doumbia, Olanare has the advantage that he can be a significant attacking threat in the air. Furthermore, Musa and Olanare have played together for the Nigerian national team, where they have demonstrated that their skills are complementary to one another.

Another significant benefit for CSKA Moscow is the fact that at 21-year old Olanare, who has already played seven matches for the Nigerian national team, still has enormous untapped potential. The fact that CSKA Moscow’s other Nigerian striker Ahmed Musa remained at CSKA Moscow—Musa had a serious transfer offer from Leicester City—will also be beneficial off the pitch, as Musa will surely be called for by CSKA Moscow’s head coach Leonid Slutsky to ease Olanare into life in Russia’s capital. Hence, Olanare could very well become the key signing for CSKA Moscow title challenge in the spring.

A successful loan, and subsequent full transfer of Olanare, would also allow CSKA Moscow to develop a player that could very well turn into one of the best strikers in the Russian Football Premier League.