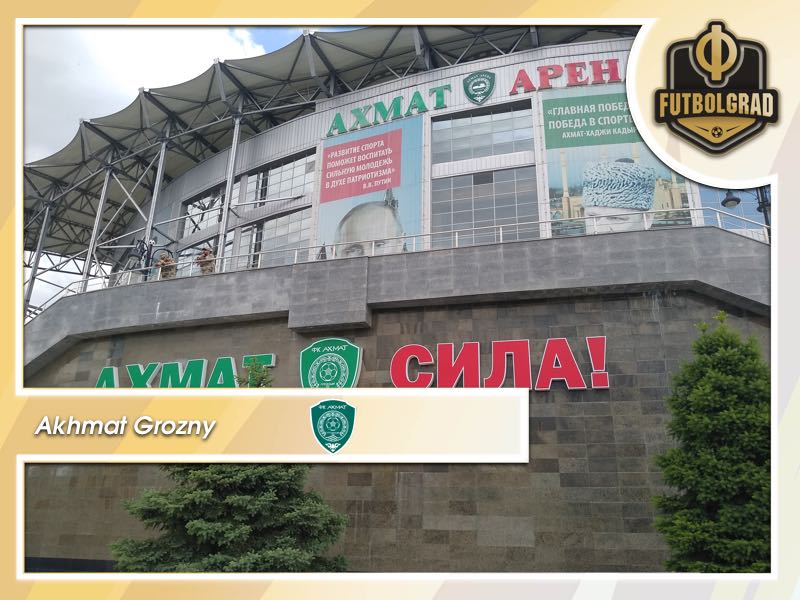 Whatever the manner of Grozny’s wealth, it is hard to catch your breath as you soak up the opulence. Akhmat Kadyrov mosque takes pride of place at the point where Putin Avenue flows into Kadyrov Avenue, across the River Sunzha from the sparkling towers of Grozny City hotel and the business district, and across the road from where the monstrous 400m+ Akhmat Tower will be built. “I’ll take two, maybe three years,” Anton tells me.

In the hostel Anton had introduced himself the night before and offered to act as a guide. He had arrived in the city only three weeks ago himself after his brother had spent time there. Three years ago, Anton’s brother had volunteered in the conflict in Donetsk. Within a month Anton had flown out to collect the body.

Death and war are never far behind the glossy, glitzy sheen of modern Grozny. The magnificent boulevard that bears the name of the Russian president is lined with high-end American burger chains and jewellery stores, but less than two blocks away lies the vast square that once housed the central market. Now all that remains is a pile of rubble and parched scrubland.

The marketplace itself was the hub of trade before the Chechen wars in the 1990s. During the conflicts that claimed an estimated 100,000 lives according to some sources, the usual fare of fish, clothes and dairy products had been replaced by handguns, assault rifles and weapons.

“There is no real industry here…”

A clue behind the opulence lies in the images, quotes and sheets names after Vladimir Putin. At almost every opportunity his face is displayed alongside that of the first president of the Chechen Republic, the late Akhmat-Hadzhi Kadyrov, and his son, Ramzan. Back-slapping quotes adorn the endless memorials dotted around the city affirming notions of pride, leadership and power from Putin and both Kadyrovs towards each other.

Was there a wealth of oil behind Chechnya’s boom? “There is no real industry here,” Anton, a former security guard at Domodedovo airport in Moscow, explained. “A few years ago they tried to establish a car manufacturing plant, but it was closed down within four years. What happened was twice a week a disused aircraft that had been stripped of its seats was loaded with cash from the floor to the windows. Officially it was not part of the federal budget of course…” 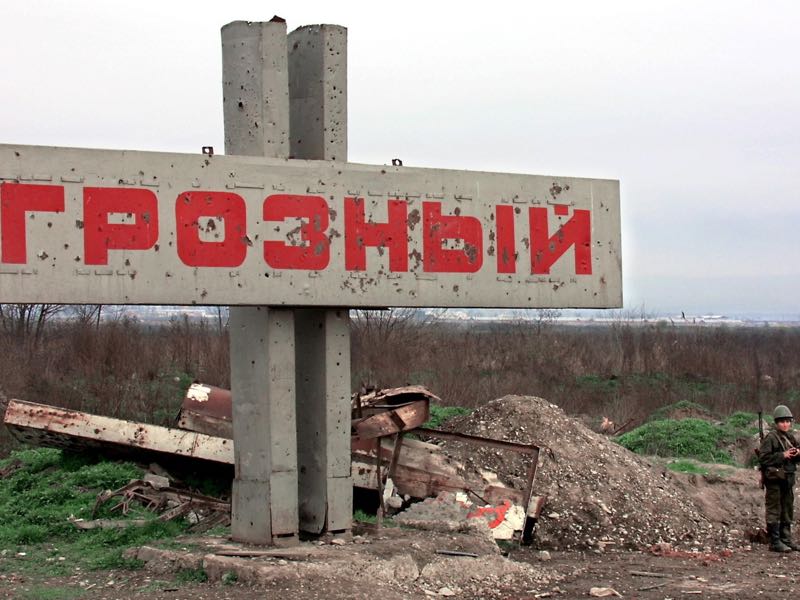 Kadyrov was said to have travelled to the Kremlin on public transport after his city and region had been decimated, effectively cap in hand. Two decades ago, Chechnya was on its knees, destroyed in more than one sense. Sensing an opportunity to plant a firm foothold in the region while also securing peace, Putin pledged his support in exchange for Kadyrov’s backing.

The overt show of friendliness between Kadyrov and Putin is apparent wherever you look. By supporting the rebuild of Grozny, a strategic ally was forged in one of the most volatile regions of the Russian Federation. Although the cooperation has been oiled by financial support, it remains strong. Kadyrov staged a grand showpiece legends game that included Maradona and Kadyrov himself to celebrate Putin’s birthday a few years ago.

Like many figureheads, Ramzan Kadyrov uses the city’s football club as a vehicle for promoting his image and interests. All is in tribute to his father. Sponsored by the Akhmat foundation, FC Akhmat play their home games at the Akhmat Arena where the ultras chant ‘Akhmat sila!’ (Akhmat strong). The team have had little tangible success since their Russian Cup win as a second-tier club back in 2004, something their team bus celebrates still.

Today they face Rostov on the final matchday of the Russian Premier League. It has been a blistering spell of weather despite a brief but powerful thunderstorm the night before, but mercifully the heat has died down in time for kickoff.

There is nothing at stake for either side, with both relegation and hopes of European football long gone. Even the side note of Brazilian defender Rodolfo retiring after the match is dampened by his absence from the starting lineup through injury.

Perhaps the conditions mixed in with Ramadan being in full swing in this Muslim city have affected the crowd. Down below the main stand club captain Rizvan Utsiev is chesting down endless long balls to cross into Ablaye Mbengue with little success. Oleg Ivanov is spraying balls out wide to Utsiev and Bernard Berisha; the plan is quite clearly to pump aerial balls into the box. 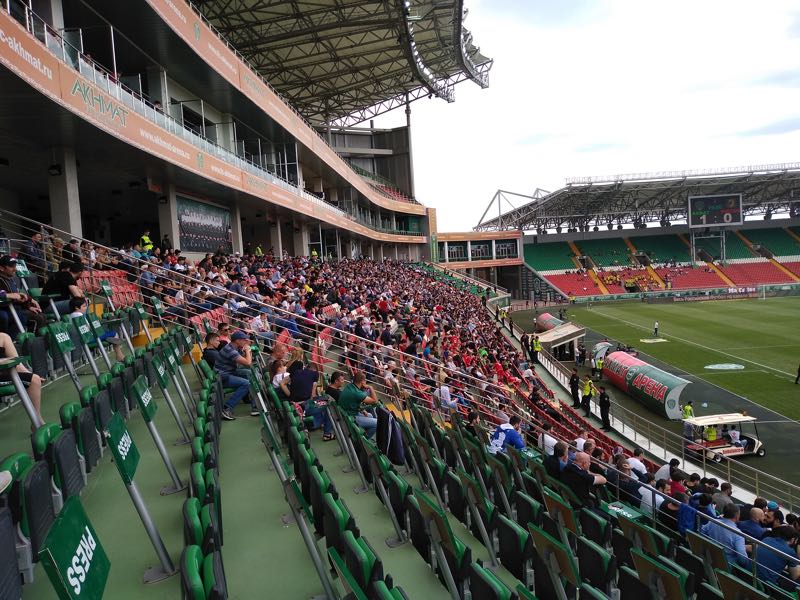 Utsiev is a long-term stalwart. A hard-working if unspectacular full-back, he certainly has the backing of Kadyrov. A few years ago, he had been beaten on the outside by Rubin Kazan’s Turkish winger Gokdeniz Karadeniz, and his lunge was a clear yellow card. As he had already been booked, the referee had to send him off. On the stadium loudspeakers, Kadyrov boomed: “The referee’s a goat!” The actual meaning in Russian is significantly less complimentary than the comparison to livestock.

The warm-up works. Shortly before half time, Mbengue darts in front of Dennis Hadzikadunic to turn Ismael Silva’s right-wing cross into the net. Rostov had perhaps shaded the opening period, but in truth, there was little of note to characterise the game. Ragnar Sigurdsson lost control of the ball after six minutes and caught Oleg Ivanov late. On the half hour mark, Alexandru Gatcan was caught in possession by Ivanov; the Akhmat schemer drove forward into space with options out wide, but his badly scuffed shot trickled through harmlessly.

Ivanov is a tall, imposing playmaker whose faster days are beyond him. “While I’m still playing, I still have ambitions to get back into the Russia squad,” he told FG after the game. Stanislav Cherchesov has built a reputation for instilling a new feel to his call ups so a recall may be a tall order despite Ivanov good form.

On the ball, however, he continues to dictate the pace of the game around him. There are precious few darting runs from either side apart from the indefatigable Berisha, but even by the sluggish speed on show Ivanov takes his time.

About 10 minutes after half time, Venezuelan international Wilker Angel spots his teammate in space on the right and sprays a drifting ball out to him. With runners chasing him, rather than take them on in a foot race Ivanov takes a touch, looks up, and drills a pass right onto the foot of the onrushing Berisha. Only a desperate slide from Hadzikadunic denied a second goal.

The last ten minutes began with a bang. Ivanov receives a ball between the lines and calmly stroked it through to Mbengue. Evgeniy Chernov somehow made it back to get a touch to deflect it wide. Up to the other end, Belarussian veteran Timofey Kalachev burst in front of Milan Mohammadi to meet an Alexey Ionov cross with a diving header, but Evgeniy Gorodov turned it wide.

Questions have been asked in the past about the practicalities of Akhmat qualifying for Europe. Only last year it was reported that homosexuals were being rounded up and imprisoned for the sexuality, but the security forces are among the most effective in Russia. I passed more than one armed guard carrying AK47 assault rifles on the street, but every one I approached for directions or advice was disarmingly charming.

First, though, they have to get there. Akhmat are traditionally a very hard side to break down under Rashid Rakhimov. The issue is inevitably at the other end. “We need more players,” said Ivanov. “If we have injuries or disqualifications we need more players. I think it’s no problem to attract foreign players to Grozny because it’s a good city.”

Mbengue has earned something of a talismanic reputation in his five years at the club. He was awarded with a Toyota just weeks after he had signed for scoring twice against Spartak Moscow. Then again, Kadyrov gave a Mercedes to a five-year-old bodybuilder who recorded over 4,000 pushups. The risk of the unknown might be too much for some, but the rewards are extensive.