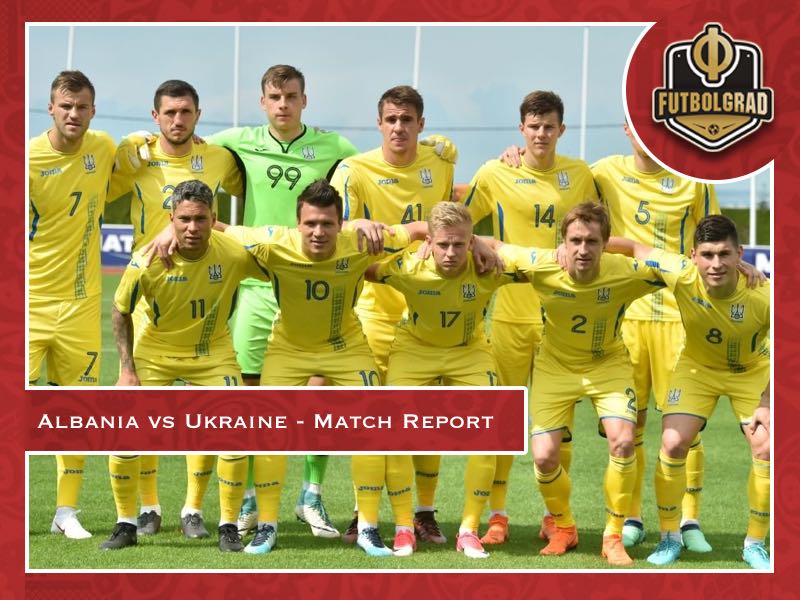 Ukraine dominate Albania in final friendly before the summer break

Albania v Ukraine started with a rather lively first half in which the Zbirna dictated the match as they scored four goals against Albania. Having concluded their international friendly schedules, both sides may now divert their attention toward the summer break.

Albania and Ukraine concluded their international friendly tour in Évian-les-Bains in the Camille Fournier Stadium. Unfortunately for the Albanians, the match resulted in their third consecutive loss. Ukraine, on the other hand, had a near perfect game.

The Eagles started the brighter of the two sides, testing Ukraine’s Andriy Lunin early in the match. Seeing an opening, Elseid Hysaj delivered a cross to Ermir Lenjani into the Ukrainian penalty area. After beating Ukraine’s defence, Lenjani had an opportunity to open the scoring. From a tight angle, the midfielder tried to lob the Ukrainian goalkeeper, however, his effort narrowly glanced past the far post and the score remained goalless.

Their dominance would be short-lived. In the 31’, Marlos found Andriy Yarmolenko on the edge of the penalty area, and the captain took a few nifty touches to beat the Albanian defence. Noticing an unmarked Yevhen Konoplyanka, the captain passed the ball to his compatriot, who then slotted home.

Minutes later, the Yellow-Blues doubled their lead. After playing from the back, Oleksandr Zinchenko found Konoplyanka, and the winger darted into the Albanian half. Known for his skills and speed, the Albanians attempted to close down the Schalke man, yet he found Yarmolenko and returned the favour. The captain then rushed through on goal and scored, taking the match to 0-2 in the 36’.

Misery would continue for the Eagles on the stroke of halftime. After a quickly taken freekick and some miscommunication between the Albanians and the referee, Marlos collected the ball and delivered a cross into the Albanian penalty area, where Ruslan Malinovsky gathered the ball. While the Ukrainian was through on goal, he opted to pass to his captain, and Yarmolenko fired past Berisha in the 45+1’. This effort led to his second goal of the night, and the third in the match.

Following halftime, the Albanians made a few defensive changes. At the restart, the Eagles threatened Lunin, where a cross delivered by Hysaj found Berat Djumsiti. The midfielder chested the ball down to Ndoj in the 47’, and Ndoj fired towards goal. His tame shot, however, missed the near post.

As the match went on, the Albanians and Ukrainians made an additional series of changes, introducing more veteran players into the match. Despite the efforts made by the Eagles, they were unable to break down the strong defensive composure of the Yellow-Blues.

Konoplyanka nearly found his second goal of the night in the 83’ after taking a free kick in a dangerous area. The winger fired towards goal, where Berisha expertly saved the free kick. Yarmolenko attempted to fire on the rebound, but the Albanian goalkeeper saved again.

The Eagle finally found their luck in the 88’. After breaking down the righthand side, substitute Bekim Balaj delivered a cross into the Ukrainian penalty area. Ndoj collected the ball and expertly fired towards the Ukrainian goal. Despite their efforts to prevent the attempt, Karavaev and Lunin were unable to divert the effort and Albania registered their first goal in the match.

The Ukrainians had the final say in stoppage time. While it seemed both teams looked to close out the match, substitute Mykola Shaparenko carved open the Albanian defence and sent Yarmolenko on a one-on-one attempt against Berisha. The captain, however, would not register a hat-trick as he opted to pass to Konoplyanka, who fired home in the 90’+1. The match then ended 1-4.

With the conclusion of this match, Albanian manager Christian Panucci will be left wondering what improvements can be made to his side. Following losses to Norway, Kosovo, and now Ukraine, the Eagles conceded eight goals while only scoring once. Much will need to be addressed if they have any hopes of performing well in the first UEFA League of Nations later this year.

Ukrainian manager Andriy Shevchenko, in contrast, will be very pleased with his players. Having opted for a younger squad, as well as handing Lunin his first full international debut, these players demonstrated their talent and skills in the routing against Albania. While only an international friendly, they will have a positive result heading into the summer break in preparation for the UEFA League of Nations.

Andriy Yarmolenko, who captained the national team for the first time in his career, had a strong performance. The winger registered two goals and two assists, demonstrating what he is capable of at full strength. After a poor showing in his first season at Borussia Dortmund due to a series of managerial changes and a serious injury, the Ukrainian appears to be fully recovered. With this performance, in addition to the summer break, Yarmolenko will strive for a much better performance with Dortmund during the 2018/19 season.

After a short free kick, Ukraine’s Marlos lifted a pass over the Albanian defence and Ruslan Milanovskiy collected the pass. With only Albanian goalkeeper Etrit Berisha to beat, the young midfielder slotted the ball to Yarmolenko, and the captain fired home in the 45’. By halftime, the Ukrainians were ahead 0-3 in what quite simply was a remarkable performance. Shevchenko opted for a younger, less experienced side and his selection surely paid off.

Mark Temnycky covers the Ukrainian men’s national team and Ukrainian clubs competing in the UEFA Champions League and Europa League. Outside of Futbolgrad, he is also a contributor covering Manchester City for SB Nation’s Bitter and Blue. Follow him @MTem33