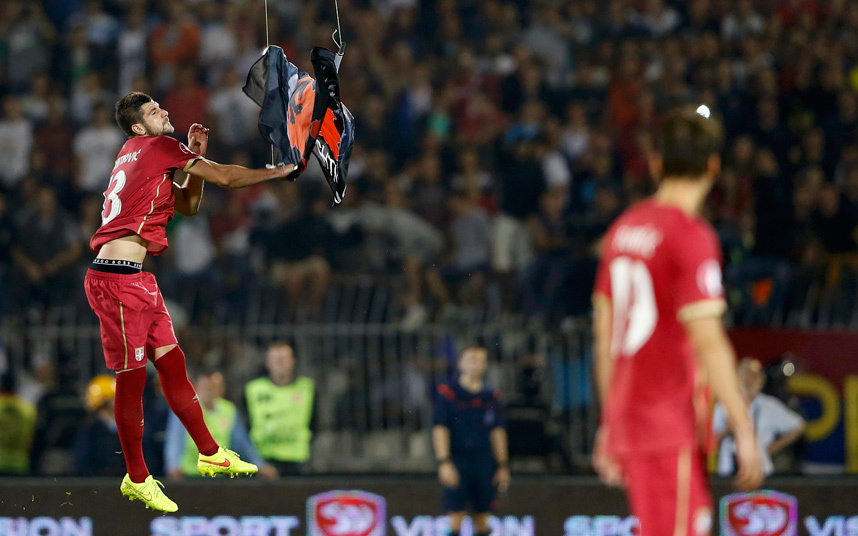 It is never just about football in the Balkans. The war-torn region of South-Eastern Europe remains, to date, a conflict-prone zone. When it comes to Serbia and Albania, the long and ever-strained history shared by the two nations has become embedded in their DNA.

Kosovo – The Heart of Serbia, the Pride of Albania

Much of the tension between the two countries revolves around a piece of land called the Kosovo. This area has been disputed for generations as it is considered by Serbia to be the centre of its faith and cradle of the nation; Kosovo has always been Serbian, or at least that is what people of Serbia believed in the past, believe today and expect to believe in the future. That unique feeling of national pride and sense of connection are emotions that did not end, even after Kosovo’s unilateral declaration of independence, which occurred in 2008, years after Slobodan Milošević’s attack against ethnic Albanians fighting for independence in 1998, NATO’s intervention in 1999, and the expulsion and flight of 500,000 people (90% of Kosovo’s Serbian population) from their homes to Serbia. 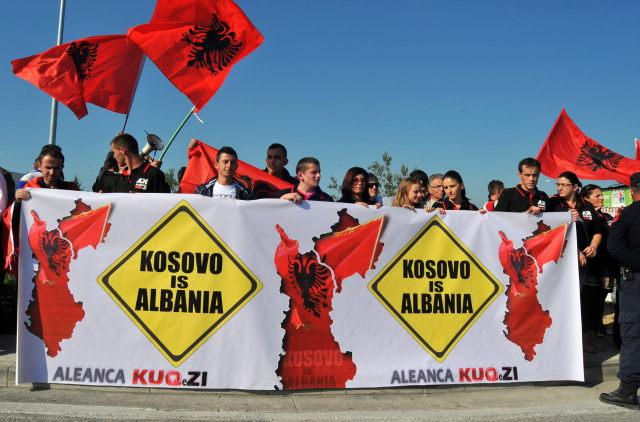 Both Serbia and Albania lay claim to the Kosovo – B92.net

Albanians have their own beliefs. Albanians claim that the Serbs settled the area in the 7th century. Albanian nationalists, like their Serbian counterparts, firmly believe that they are the descendants of an ancient tribe who, allegedly, inhabited the Balkan area long before the above-mentioned period. The concept of Greater Albania is deeply rooted in the vision of a unified homeland of Albanian people; they see the Kosovo as its centre, and also include territories in southern Montenegro, north western Greece and western Macedonia.

Years of tension, conflict, and instability in the region were brought together in 90 minutes of a football match played at the Partizan Stadium in Belgrade on October 14, 2014.

The displays put on by the fans, the nationalist chants against the visiting team, and the insults directed toward the Albanian players where to be expected, but the last thing those watching the game expected, was a drone flying the flag of ‘Greater Albania’ into the stadium. This was an assault that enraged Serbian fans. Intending to remove the flag from the pitch to enable the the game to continue, Serbia’s Stefan Mitrović unintentionally provoked the Albanian players, who rushed toward him to defend their flag. Mayhem erupted, Serbian fans invaded the pitch, and it all ended in chaos with the Albanian players refusing to return from the locker room. 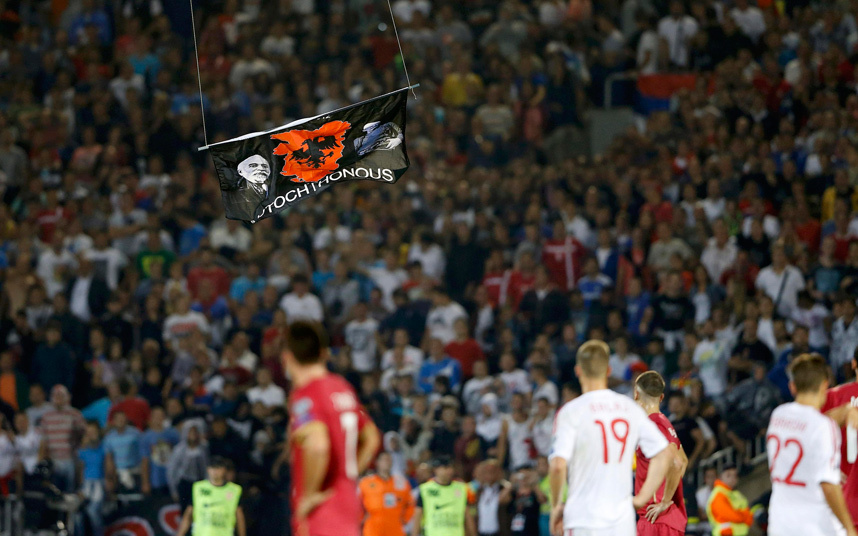 The drone carrying the flag of greater Albania – Image via telegraph.co.uk

UEFA awarded Serbia a 3-0 win but then took away the three points and ordered the next two home games to be played behind closed doors. After several appeals, the Court of Arbitration for Sports rejected the Serbian side, and ruled against the original UEFA decision with the game deemed to have been forfeited by Serbia 0-3—and for the first time in history, left a team with minus two points in the standings.

Without taking sides, some conclusions are easily made: The Serbian side made severe blunders with the less than professional organization of a high-risk game that allowed an Albanian national to fly a drone in the stadium. Another error was the failure to prevent fans from entering the pitch and getting involved in the struggle. On the other hand, although the Albanian side denied any connection to Ismael Morina (the man who released the drone), the claims made by the Serbian Minister of internal affairs Nebojša Stefanović that the incident had been planned by the Albanian government, should have been taken into consideration.

On returning home after the troubled match, the Albanian players were welcomed as heroes, with thousands of fans welcoming the national team at the Tirana airport. There was disappointment and bitterness from the Serbian side, and the game is remembered by Serbs as the most embarrassing moment in the history of the Serbian football.

The diplomatic scandal left no one indifferent—not even the Prime Ministers of the two countries who were engaged in a heated debate on Twitter after the ruling of the Court of Arbitration for Sports. While the Albanian PM Edi Rama celebrated the historical win, Serbian PM Aleksandar Vučić lamented that the victims were being punished.

As the neighbouring nations have set their course to eventually join the European Union, years of conflict need to be set aside in the interest of this common cause. Hence, the countries of the Balkans have set up a youth cooperation plan, which might indeed be a move in the right direction.

A serious test of the cooperation between Albania and Serbia was the return game between two countries that was played on October 8, 2015. The game was played in the Elbasan Arena where Albania welcomed Serbia in front of 12,800 fans. Unhappy with their government’s decision to ban the national insignia, black-and-red clothing, and their hero Ismail Morina from the stadium, the fans made sure their voice was heard before the game. In a letter sent to the government officials, the fans threatened to create incidents that would be regretted by the authorities.

The match officials took nothing for granted. Unlike the Serbian side, which had nothing to play for, as they were already eliminated from the European Championships, Albania’s national team were on the verge of the historic success of qualifying for the Euros—which they ultimately achieved in Armenia on October 11. Albania were sitting third in group I with a game in hand and a point short of Denmark, who were on second place. A win over Serbia would have been a huge step toward the 2016 UEFA European Championship, but there was more than just three points at stake, as the Albanian’s also wanted to send a message to their Serbian counterparts.

With no competitive importance to the game, the Serbian players were playing for national pride and self respect. The Football Association of Serbia (Fudbalski savez Srbije) took their own precautionary measures, while at the same time putting their faith in the Albanian authorities. The Serbian team, for example, took their own chef with the sole task of preparing and checking the food. In addition, the Serbian expedition took their own water supplies to Albania, which ended up as an embarrassment when the Serbian public described the precautions taken by the Football Association (FSS) as excessive. 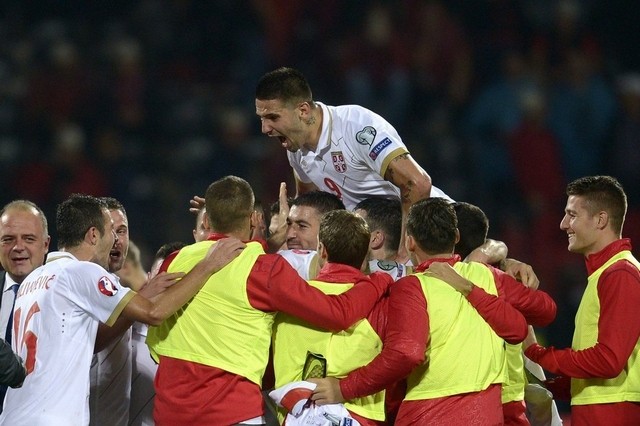 The Serbian fears were somewhat justified, when the team bus was pelted with rocks on its way through the crowded streets of Tirana to neighbouring Elbasan. But that was it. The Albanians proved to be great hosts and organized a well-secured affair. Serbia emerged victorious—winning the match 2-0—thus managing to restore their nation’s pride, and in a way, made amends for the embarrassing match in Belgrade.

Albanian historic success had to wait a few more days. A win over Armenia was fiercely celebrated but the Serbs were not forgotten. Threatening messages and burning the Serbian flag in Tetovo and Bujanovac clouded the Albanian EURO 2016 qualification and proved that there was still a long way to go before the two nations could be considered typical football rivals.