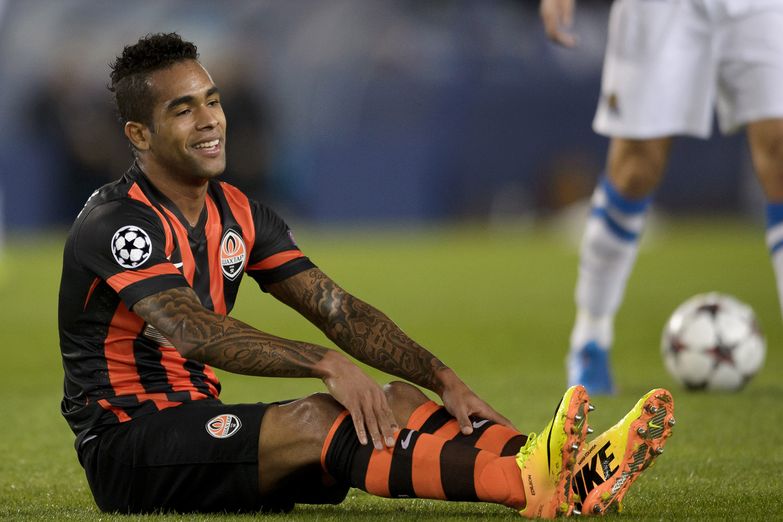 Alex Teixeira – On the Path to Overtake Mkhitaryan’s Record

The 4-0 win has overcome the 1-0 defeat that Shakhtar suffered against Malmö on October 21. They now hold the all important tie breaker as both clubs face two tough games against Paris Saint-Germain and Real Madrid, which could very well mean that both Shakhtar and Malmö will remain stuck on three points.

Among the goal scorers was the Brazilian sensation Alex Teixeira who rounded up Shakhtar’s victory by making it 4-0 in the 73rd minute. Teixeira has been on fire in the Ukrainian Premier League (UPL) season this season for he has scored 18 goals in 12 UPL games already. The current record holder is the Borussia Dortmund attacking midfielder Henrikh Mkhitaryan, who managed 25 goals in the 2012-13 season for Shakhtar Donetsk.

Tribuna.com even started a graph that compares Teixeira’s current progress with that of Mkhitaryan. A bucket load of goals in the last three matches has made it difficult for the website to keep up with Teixeira’s exploits, however, and the graph has not been updated in the last couple of weeks—as Tribuna’s Oleksander Tkach has told Futbolgrad “we didn’t expect him to embark on such an exciting goal scoring streak.” Indeed, Teixeira’s recent goal scoring exploits may mean that Tribuna will wait to publish the final tally at the end of the season.

Shakhtar Donetsk has five matches remaining before the winter break. Teixeira’s current rate of 1.5 goals per game would bring the Brazilian striker to 25.5 goals, which may or may not—depending whether Teixeira converts that half goal into a full goal—lead to a new goal scoring record by the end of the final game before the winter break.

The fact that Shakhtar will most likely be relegated to the Europa League after the winter, could mean that this will be the only opportunity for Teixeira to break Mkhitaryan’s record, as the Teixeira goal scoring exploits have surely been noticed by clubs in Germany, England, and Spain.

In fact, as I wrote for the Soccer Manager Blog on October 27, Chelsea manager José Mourinho was recently invited by Shakhtar Donetsk’s CEO Sergei Palkin to visit Ukraine’s qualification match against Spain, which led to speculation that either Mourinho could be interested in a player from the Ukrainian national team, or he used the visit to enquire about the availability of Alex Teixeira.

If Shakhtar drops out of the Champions League, such a transfer certainly is a possibility. Even in the unlikely event that the club survives the group stage, Teixeira could still be on his way out, as Shakhtar is no stranger to capitalizing on players when the time is right—as was demonstrated with the transfer of Willian to Anzhi Makhachkala in the winter of 2012-13.

As for the goal scoring record: Oleksandr Tkach believes that Mkhitaryan’s record,even if broken by Alex Teixeira, will remain one for the ages; Teixeira’s goal scoring feats are not as incredible as Mkhitaryan’s “considering the lack of proper opposition in the [2014-15 Ukrainian Premier] League.” Then again, even in a league as lopsided as the UPL, scoring an average of 1.5 goals a game is an accomplishment, and will certainly land Teixeira in the big leagues no later than next summer.