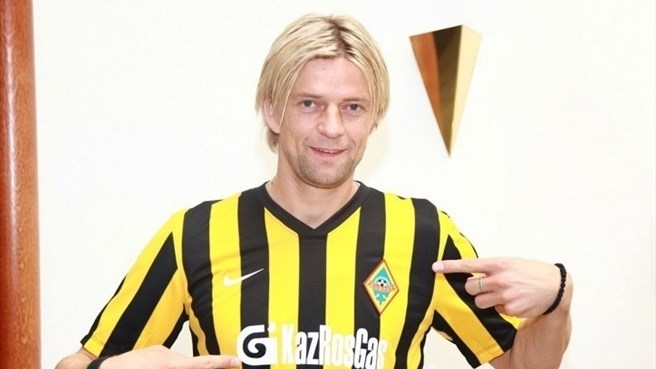 Anatoliy Tymoshchuk – A Transfer Built On Oil And Gas

On July 5 Kazakh club FC Kairat announced the signing of Ukraine national team captain Anatoliy Tymoshchuk. Tymoshchuk, whose contract at Zenit expired this summer, had a multitude of options regarding the direction of his career. The defensive midfielder was linked with moves to MLS side New York City FC as well as to several clubs in the Middle East. He was also reportedly offered an administrative role at the Football Federation of Ukraine and at one point was rumored to return to Ukraine to sign for Dnipro Dnipropetrovsk.

Tymoshchuk himself denied these rumors, declaring that if he were to return to the country, he would only play for his former club Shakhtar. In the end Tymoshchuk made the decision to move to Almaty, the former capital of Kazakhstan, where he signed an 18 month contract with Kairat. Once the move was made official, he told the club’s website that he was impressed by “the ambition of the club and the direction it is following.”

Kairat is the only side from Kazakhstan to have competed in the Soviet Top League and, with 24 seasons in the top tier under its belt, was the most successful Soviet-era club from Central Asia. In 1992 the club claimed Kazakhtan’s first post-independence league title, but has only added one championship since and finished third in the 2014 season.

Kairat is now determined to climb back to the top of Kazakh football and the future looks promising. The team is managed by Vladimir Weiss who took Slovakia to the round of 16 of the 2006 World Cup. Kairat is also the only Kazakh club with its own academy—which opened in 2013 and boasts former Feyenoord and Shakhtar Donetsk youth coach Patrick van Leeuwen as its sporting director.

On Thursday Kairat knocked Serbian side Crvena Zvezda out of the first round Europa League qualifiers 4-1 on aggregate and will now face Alashker in the next round. The acquisition of Tymoshchuk, a former Champions League and Europa League winner, is a further statement of intent.

The chairman of the club and the man pulling the strings is the aptly named Kazakh gas tycoon Kairat Boranbayev. Boranbayev has close connections to the government; his daughter is married to the grandson of Kazakh president Nursultan Nazarbayev. Boranbayev was also involved with bringing McDonald’s to the Central Asian state and last year made headlines in the British tabloids when he reportedly paid American pop singer Nicole Scherzinger over £100,000 to perform at his private birthday party.

More importantly, Boranbayev is the former general director of Kazakh gas company KazRosGas. After resigning from the company in 2014 he stated: “KazRosGas is a very stable company. I worked there for eight years and now I want to find another path for business development. FC Kairat is also a business project, and now I have the opportunity to devote more time to it.”

Despite his resignation, Boranbayev retains close connections to his former company, and KazRosGas continues to sponsor FC Kairat. In addition, KazRosGas is a subsidiary of Russian gas giant Gazprom, who hold a 50% stake in the company.

Gazprom, whose football empire has been discussed by Futbolgrad in the past, is also the owner of Tymoshchuk’s former club Zenit. The connections between Gazprom and KazRosGas – and by extension between Zenit and FC Kairat – may very well have played a role in Tymoshchuk’s decision to move to the Kazakh club. As the Kazakh news site vesti.kz reported, the signing of Tymoschuk and the additional possible transfer of Aleksandr Kerzhakov from Zenit to Kairat could lead to closer relations between Gazprom and KazRosGas.

Even if Tymoshchuk’s decision was completely autonomous and made solely for footballing reasons, this case illustrates the influence that massive companies such as Gazprom and its subsidiaries have across the entire post-Soviet footballing landscape. For KazRosGas, FC Kairat represents not just a football project but a way to promote its brand and manage its image. The signing of a high-profile star such as Tymoshchuk will greatly contribute to this cause.