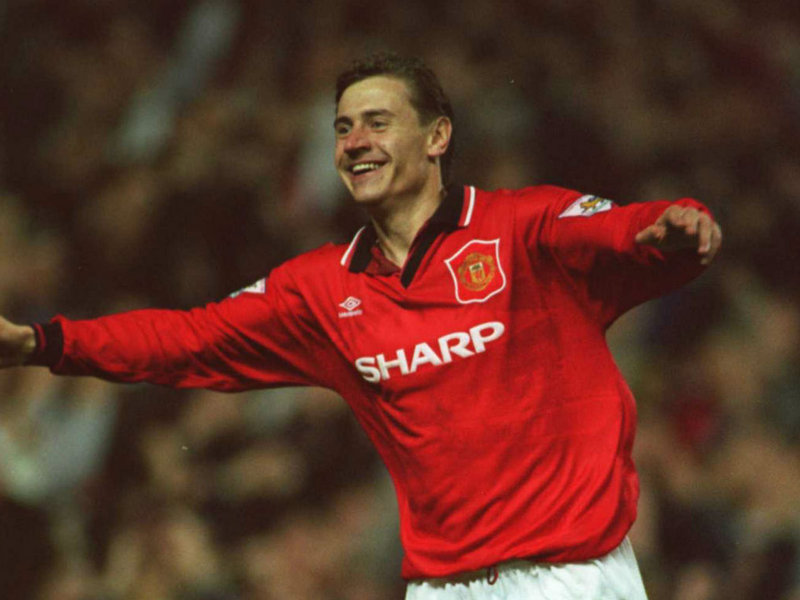 Andrei Kanchelskis – An Embodiment of the New Russian

Socialism as a concept contradicts its relationship to football. The ideals of community and social management have done much to segregate the men it wishes to unite in Eastern Europe.

In 1949, Hungarian refugees flooded into Europe as Communism spilled into their country. Laszlo Kubala was one of them. Having already fled to Czechoslovakia and then back to Hungary, playing for both national teams in the process, Kubala finally escaped in the back of a truck. He ended up in Spain where he became a club legend with Barcelona and appeared for the Spanish national team—his third and final national transition.

Kubala played his last international game in the early sixties. In the latter end of the same decade a footballer—Andrei Antanasovich Kanchelskis—was born who would go on to have an international career similarly fractured by socialist politics

Kanchelskis – An All Soviet Citizen

Kanchelskis was born in 1969 to Lithuanian parents in the Ukrainian city of Kirovograd. (The town is named in honour of Sergei Kirov, the head of the Communist Party in Leningrad, whose assassination in 1934 was the catalyst for Stalin’s Great Purges in the latter half of that decade.) Kanchelskis would go on to become one of the leading lights of Soviet and post-Soviet football.

He began his professional career 300km north of his hometown at Dynamo Kyiv in 1988, and one season later he moved east to Shakhtar Donetsk. 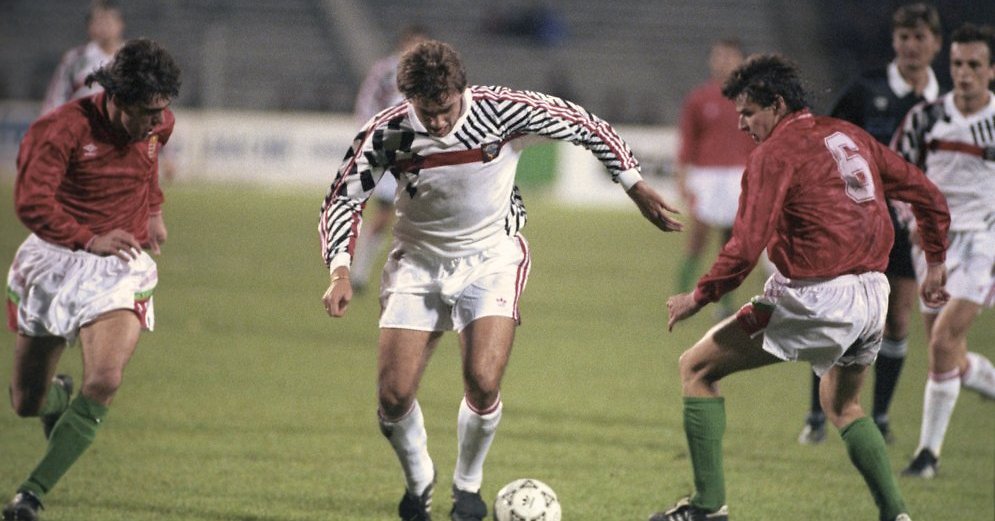 Kanchelskis was quickly called up to play for the Soviet national team – Image via rus.delfi.lv

By this time Kanchelskis was called up by Valeriy Lobanovskyi to play for the Soviet Union, and made his debut against Poland. It was while winning his sixth cap against Scotland at Ibrox two years later that he first attracted British attention—namely that of Manchester United coach Alex Ferguson.

“When I returned (to the Soviet Union) I was invited back to England for a trial period,” Kanchelskis later recounted. “I wasn’t told which team it was, where I was going to.”

Despite the mystery regarding the identity of his admirers, the 21-year-old boarded a plane to England. Upon arrival, Kanchelskis, much to his delight, learned that it was Manchester United who wanted him. Ferguson regarded the £650,000 asking price for the stocky, flop-haired youth, as a “justifiable risk” and Kanchelskis became a United player.

His first season was a success and he won the UEFA Super Cup against European champions Red Star Belgrade in November 1991. On Christmas day that year, the crumbling USSR was finally dissolved by President Mikhail Gorbachev, and the Commonwealth of Independent States (CIS) was formed as its successor as a reciprocal economic and crime prevention entity between the former Soviet states.

As a result, the Soviet side that had qualified for the 1992 European Championships played under the CIS banner. Kanchelskis played all three games at the championships in Sweden, where CIS failed to win a game and registered just a single goal in draws against Germany (0-0) and Netherlands (1-1), before being trounced by Scotland 3-0. They finished last in their group, having failed to send the message to the world that their political reformation had translated into success on the pitch.

After the tournament, the CIS football team disbanded into 15 individual states, and Kanchelskis chose to represent the Russian Federation as opposed to the Ukraine, his country of birth.

After his return to England, Kanchelskis quickly became a cult hero at Manchester United, as part of an attacking triumvirate with the emerging Ryan Giggs and Lee Sharpe. To the West, he will be remembered most prominently as the handsome, quicksilver winger who splayed defences from the right wing for United. He enthralled and endeared himself to all who watched him at Old Trafford, and was part of the side that won the first Premier League in 1993, United’s first title for 27 years. 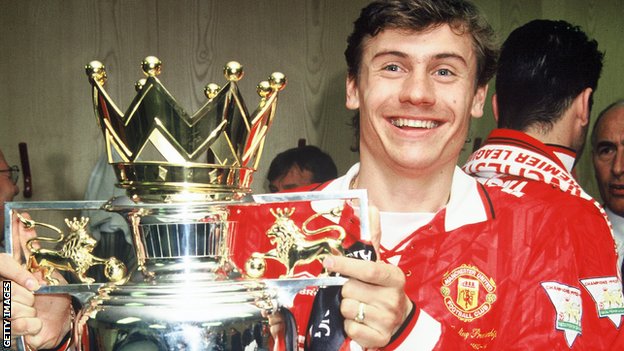 A year later United won the English League and the FA Cup double with the ebullient Kanchelskis at his exhilarating best. His brilliant effort against Oldham in the FA Cup semi final at Maine Road underlined his form.

That summer Kanchelskis would have carried that form into the 1994 World Cup in the USA. But, after the qualification process, 14 key players banded together and demanded coach Pavel Sadyrin’s replacement by former CIS coach Anatoly Byshovets, citing “stone-age coaching methods” as the reason for their dissatisfaction. Kanchelskis was the leader. The Russian Football Union sided with Sadyrin and refused to fire him.

As a result, Kanchelskis and six others boycotted the finals, and Russia crashed out at the group stage in California with an inexperienced side.

Kanchelskis later stated that he did not regret the decision. His permanent grin and happy-go-lucky demeanour often belied his bolder behaviour off the pitch—a trait that would rear its head again soon after the Sadyrin incident.

For his club, Kanchelskis continued his form. In November 1994 he scrawled his name into United folklore by scoring a hat-trick in a 5-0 Manchester derby win against rivals City.

“I will never forget that match,” he told the Manchester Evening News in 2010. “It was a superb occasion for the fans. It was a great game to play in.”

Kanchelskis finished that season as Manchester United’s top scorer and won the Sir Matt Busby Player of the Year award, but United lost the 1994-95 Premier League title to Blackburn and the 1995 FA Cup final to Everton, owing in no small part to talisman Eric Cantona’s notorious suspension for most of the season.

By the end of the season problems had arisen in Kanchelskis’ attitude, allegedly due to a clause in his contract guaranteeing him a slice of any profit if he were sold.

“His attitude was so bad that there was nothing to be gained from keeping him,” Sir Alex Ferguson later commented.

Kanchelskis’ agent Grigori Essaoulenko further enflamed the situation. Essaoulenko—ironically investigated by FIFA for corruption years later—offered Ferguson £40,000 in the form of a decorative samovar in a bid to manoeuvre a transfer to Everton for his charge. Furthermore, when Essaoulenko lost his temper with then-United chairman Martin Edwards for blocking a move to Everton, he threatened “If you don’t sell him now, you will not be around much longer.”

It was the final straw. “Given the transformation that had occurred in his behaviour, Merseyside was welcome to him,” Ferguson later wrote and Kanchelskis moved to the blue half of Merseyside for £5 million.

Move to Everton and a Return to the Sbornaya

Kanchelskis’ first goals for Everton came in a 2-0 Merseyside derby against Liverpool, both scored in front of the Kop. 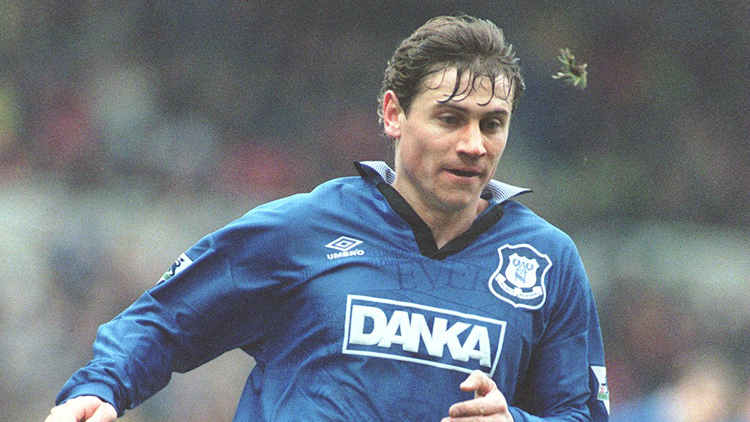 Kanchelskis after his controversial move to Everton – Image via cloudfront.net

Internationally, Kanchelskis had fully resumed his career under Oleg Romantsev and had played every minute of Russia’s Euro 1996 qualifying campaign. The Russian team was seen as the natural footballing successor to both the USSR and the CIS; however, the reality was that they carried on their poor performance. They failed to win a game and finished at the bottom of their group. Kanchelksis was ineffective in his two matches with defeats against Italy (2-1) and eventual winners Germany (3-0).

After the tournament Kanchelskis struggled to recapture his form at Goodison Park and was sold to Sampdoria for £8 million midway through the 1996-1997 season. He retired from international football in 1998 after Russia’s failed bid to qualify for that year’s World Cup in France.

He later went on to play for Rangers, where few can forget his deliciously audacious trick of stopping and standing on the ball to cheekily peek at potential crossing targets before carrying on dribbling during a Scottish Cup game. With the Rangers he won two league titles and three Scottish Cups as well as becoming the only player to score in the Manchester, Merseyside and Glasgow derbies. His stay in Scotland provided a rare highlight in the twilight of his career. 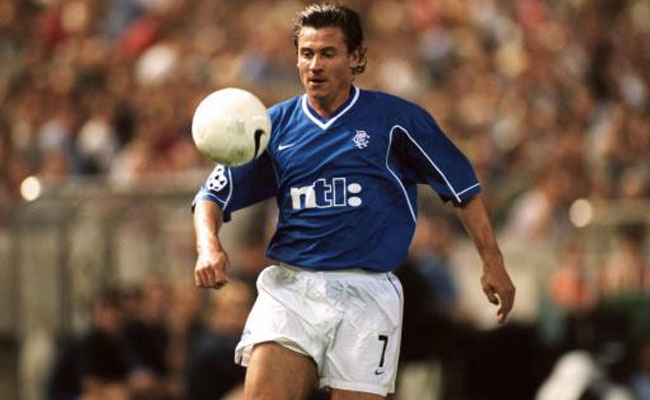 Kanchelskis would turn into a bit of journeyman playing for several club including Glasgow Rangers – Image via rangers.co.uk

Stops back at Manchester, this time on loan to City, and at Southampton, Al-Hilal in Saudi Arabia, Saturn Moscow Oblast and Krylia Sovetov passed without incident and Kanchelskis retired in 2006.

He drifted into retirement with Torpedo-ZIL Moscow, described by Kanchelskis as “good lads and a good team”. He guided them to 2nd place in the Russian Second Division in 2010 before their dissolution a year later.

Kanchelskis last managed Latvia’s FC Jurmala, which he left in 2014, having failed to avoid relegation.

Andrei Kanchelskis won every major English honour with Manchester United. But never has a career in the Premier League epitomised the underbelly of the shattered Soviet Union’s corruption as much as his stay in M16.

His playing career reached a plateau and plummeted at age 26 due to greed and corruption. His entourage was comprised of shady figures hell-bent on making a quick buck. They followed him as he hopped from club to club in search of a lucrative signing-on fee. They embodied new-Russian avarice and were an extension of the gangs of entrepreneurs who prospered on business opportunities brought about by the collapse of the Union. His international career was overshadowed by disruption and disrepute both on and off every pitch on which he played.

Danny was born and brought up a stones throw from Old Trafford, and followed Manchester United across England and Europe. He became acquainted with Zenit through time spent studying in Saint Petersburg. The supporters and contradictions of Russian football fuelled his love of exploring and writing about it. Danny has worked as a journalist in the United Kingdom and abroad covering boxing, football and the events that make the Russian-speaking world tick and graduated this summer with a degree in Journalism and Russian from the University of Sheffield. I currently contribute to Russian Football News, Futbolgrad, Late Tackle Magazine, and Stretford End Arising and formerly to the BBC, United We Stand, AIBA and The St. Petersburg Times. You can follow Danny on Twitter: @DannyWArmstrong