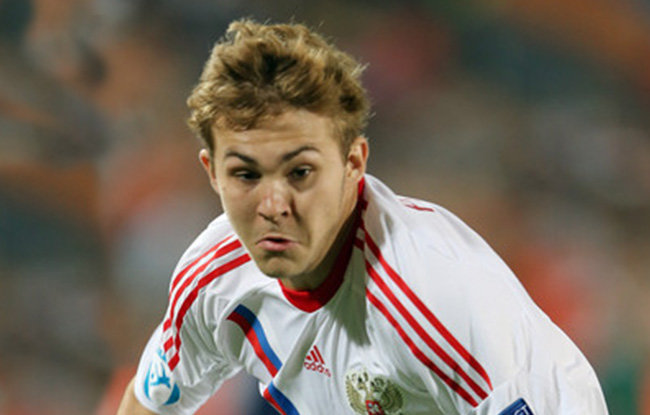 Andrei Panyukov, who plays for AC Ajaccio, scored his first two goals for his club this Friday against Bourg-en-Bresse in the French Ligue 2. Panyukov, who was a regular for the U21 Russian national team, was brought in to AC Ajaccio from Lithuania’s FK Atlantas on loan after he scored 20 goals last season.

Panyukov had been part of the Dinamo Moscow youth system and had represented Russia at different levels of the youth national teams for a total of twenty goals in thirty-six games. Panyukov made his debut for Dinamo during the 2012-2013 season and appeared in a total of six league games in which he scored one goal for the first team. Panyukov, however, failed to make an impression at the senior level in Russia, and was therefore sent out on loan to the Lithuanian side FK Atlantas in 2014. In Lithuania he finally exploded as Atlantas’ top scorer with twenty goals.

The French agent Christophe Hutteau, spotted his performance at Atlantas and subsequently helped facilitate Panyukov’s transfer to the French club AC Ajaccio. Speaking to the French website FootMercato, Hutteau stated that Panyukov had several offers from Ligue 1 clubs such as Marseille and Saint Etienne. Hutteau also represented former Olympique Marseille players Charles Kaboré and Mathieu Valbuena, who both have played or still play in Russian football.

Panyukov is one of fifty players managed by Hutteau, who has strong links with Eastern European football. Apart from Panyukov, Hutteau also manages the Lithuanian players Dovydas Virksas and Edvinas Gertmonas who signed for Saint Etienne and Stade Rennais respectively this summer.

Panyukov signed for AC Ajaccio on the last day of the summer transfer window with high hopes of making it big in French football. However, Ajaccio’s season has been a disaster so far, as the club is currently on 19th spot firmly placing them within the relegation zone.

Panyukov’s contract with Ajaccio is a one-year loan deal with a buyout option for Ajaccio—which means that he will need to repeat this Friday’s display in order to attract interest from more important teams this season. European scouts, who are looking for cheap options, scout French football, and the Ligue 2 especially closely, as the competition is known for producing some of Europe’s brightest talents—players such as Olivier Giroud or Sebastien Haller made their mark in Ligue 2 before moving on to the big leagues.

The new coach of the Russian national team, Leonid Slutsky was successful in qualifying Russia for Euro 2016 after taking over from Fabio Capello in September. As was expressed previously on Futbolgrad, Panyukov could be one of Russia’s future talents, and while the European Championships in France may come too early for him he is certainly considered a prospect for the 2018 World Cup, which is hosted by Russia. Panyukov last appeared and scored for the Russian under 21 national team in June 2015 in a friendly game against Belarus that finished 3-0 in favour of Russia.

In order to receive a first call up for the national team, however, Panyukov must have a bigger impact on Ajaccio— the team must move from the French Ligue 2 to an upper league for Slutskiy is unlikely to call up a player, who currently plays in France’s second tier.