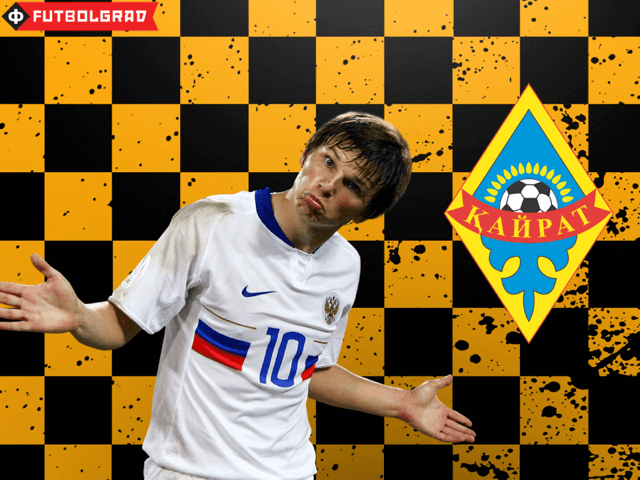 After a short marriage to the Russian Football Premier League club Kuban Krasnodar, Andrey Arshavin could be on his way to join his former Zenit Saint Petersburg teammate Anatoliy Tymoshchuk in Kazakhstan.

Andrey Arshavin was signed by Kuban Krasnodar in the summer as a free agent, as Arshavin’s former club Zenit Saint Petersburg chose not to renew the contract with the 34-year-old playmaker.

But at Kuban, Arshavin had a dismal time as he managed only eight appearances—four of them from the bench—without scoring a single goal. The marriage between Kuban and Arshavin was also marked by the continuous financial problems of Kuban Krasnodar, which at one point failed to pay wages to its players.

Hence, in the winter both Arshavin and the management of Kuban Krasnodar decided to end the contract after just six months. It was suggested that Arshavin could move to an emerging market as he reportedly garnered interest from the Chinese Super League, and Major League Soccer clubs. Transfermarkt.de then reported that Arshavin had received an offer from the Macedonian club Vardar Skopje. Vardar Skopje are owned by the Russian oligarch Sergei Samsonenko, who was reportedly keen to add Arshavin to his Macedonian club.

But then this week photos emerged showing Andrey Arshavin training with the Kazakh Premier League team Kairat Almaty. Although on February 29 Anton Lysyak—a spokesperson of Kairat—told the Russian sports portal championat.com that a contract had not been signed yet.

Lysyak stated further “Arshavin arrived for talks with the leadership of the club. Accordingly, he is still not a player of Kairat. He can not play official matches for Kairat yet, as he hasn’t signed a contract. Furthermore it is difficult to say when the contract will be signed, and whether it will be signed at all.”

The Kazakhstani news portal bestnews.kz reported on March 2 that the club will hold a season opening press conference on March 3 in which it will present the new shirts as well as the new signing to the club. Arshavin, however, has still not been announced as a new signing at Kairat Almaty, yet the portal believes that negotiations are ongoing.

Yet will Arshavin be able to help Kairat Almaty? Arshavin’s form has declined rapidly over the last two years, and the playmaker is only a shadow of the player he once was. The Kazakhstan Premier League meanwhile has made big strides towards becoming a respectable European competition.

A potential move of Arshavin to Kazakhstan has also seen some criticism in Russia. Former Zenit midfielder Alexei Igonin has criticized a potential deal for Arshavin in Kazakhstan. “I don’t know what the situation is there, but the championship [in Kazakhstan] looks like a football graveyard [for semi-retired players].”

Yet Kairat is one of the most ambitious clubs in Kazakhstan, this year the club narrowly missed out reaching the group stage of the UEFA Europa League—the French club Girondins de Bordeaux eliminated them. At home the club narrowly lost the league title to league rivals FC Astana.

Kairat are sponsored by KazRosGaz—a subsidiary of Gazprom (for more on the link between the two companies read here)—and the company has ambitions to see the club winning both the title in Kazakhstan, and to reach the group stages of the Europa League. Hence, while Arshavin’s link to the Gazprom owned club Zenit Saint Petersburg could be a useful marketing strategy for the Russian gas giant to build a stronger marketing presence in Kazakh football, it is doubtful whether Arshavin’s fitness level is enough to match the ambitions of the club.

Furthermore, by signing a player who appears to be at the very end of his career could further underline stereotypes abroad that Kazakhstan is a league for players that seek one last pay check, rather than a country that is trying to build a league that can produce clubs who can compete in international competitions.