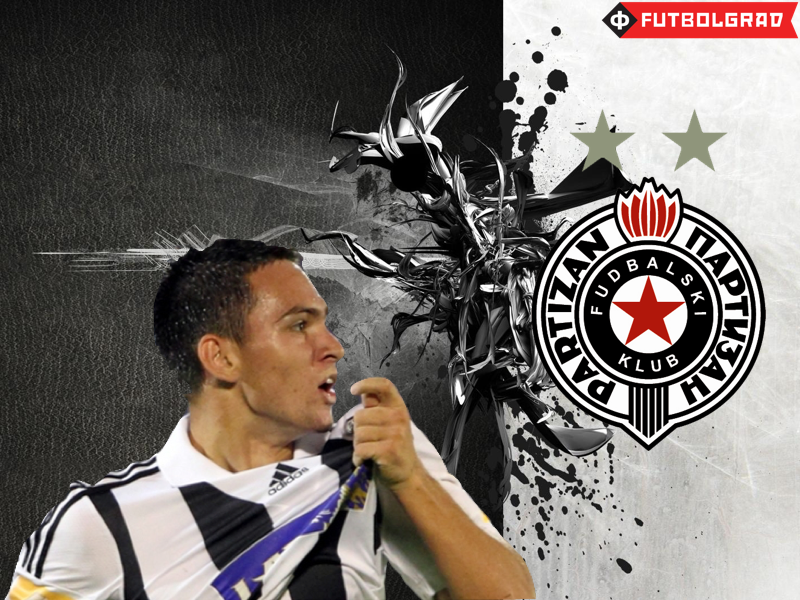 It was going to be a dream season for Partizan Belgrade. Having retained the Serbian SuperLiga title in the 2014-15 season, after Red Star’s interception of the six-year trophy haul in the previous year, Partizan invested all of their power into achieving the ultimate goal of reaching the UEFA Champions League group stage.

Power and intent were all that has been invested, however, considering the chronic lack of financial investment in the squad that has become synonymous with Partizan Belgrade and the Serbian football in general. The arrival of former Fiorentina, Juventus, Manchester City and Parma forward Valeri Bojinov was used to pacify the demands of the crowd, thirsty for big-name signings that would make a difference on the pitch.

Andrija Živković – The Centre of a Rebuilding Effort

Relying mostly on the home-grown players, with the exception of a couple of more experienced returnees, the team’s play was built upon the 19-year-old Andrija Živković, the latest prodigy to emerge from the inexhaustible talent pool of the Partizan’s world-famous academy located in the training centre called Zemunelo.

With Champions League in sight, Partizan’s ambitions were cut short in the last step as the Black and Whites, (as the Serbian champions are commonly called in Serbia), lost to BATE Borisov, who proved to be too big an obstacle in the play-offs. 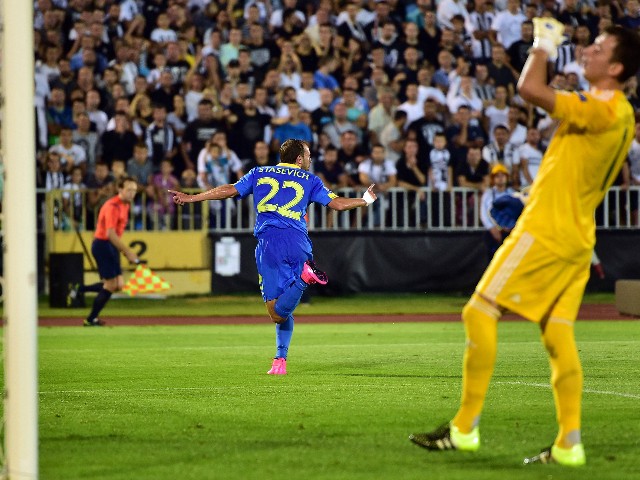 BATE Borisov was to much for Partizan – Image via sportsmole.co.uk

With Serbian club football in great financial difficulty, playing in Europe has a significance that transcends the purely sporting aspects. It means having enough money to keep your head above water for another year.

In the interest of survival, Partizan Belgrade turned their attention to the second best thing, the UEFA Europa League, and welcomed the competition with open arms.

Pitted against AZ Alkmaar, Augsburg, and the Spanish powerhouse Athletic Bilbao as the Group L favourites, the Serbian champions looked forward to surviving the cut.

Their Europa League 2014-15 season was still a fresh memory, however, so the Partizan fans were quietly hoping for a different outcome—one in which their team recorded a better result than finishing fourth in the group of four, (which was the case when they played in Group C against Tottenham, Beşiktaş and Asteras Tripoli and failed to record a single win in their six games).

Two goalless draws were less than the fans had bargained for and, this time around, no one dared to dream.

Partizan channelled all of their strength toward the European competition and their poor domestic start was swept under the rug in the interest of European dream started to unfold favourably at the beginning of the group stage.

Opening the group stage with an emotional 3-2 win over AZ Alkmaar, Partizan saw their two key men stepping up and delivering.

Abubakar Oumaru scored a brace, but it was the Serbian starlet Andrija Živković who scored the third goal of the game, thus continuing his impressive performances and great form, which started in New Zealand where Serbia Under-20 were crowned the World Champions with the young Partizan winger as their key player.

The 19-year-old Serbian international is a player of great pace and stamina. Often compared to Lionel Messi, Andrija Živković indeed displays glimpses of the Argentine’s brilliant virtuosity with a ball.

Unlike the Barcelona magician, however, young Živković often displays a lack of mental composure and concentration, so characteristic of the Serbian people in general. At times ill-tempered, Živković, on numerous occasions this season, displayed unsportsmanlike behaviour toward the fans and an inability to accept even well argued criticism.

Chest-thumping and a know-everything attitude has been supported through the lack of real competition in the Serbian SuperLiga, and by lenient, and some may even call it protective refereeing. Živković has yet to understand what it means to be a true professional.

Blinded by their sweet success over the Dutch club in the opening round of the group stage in the Europa League, Partizan fans were quick to forgive and forget.

Even the fact that their team conceded a goal in the dying moments of the game was overlooked. Instead of recording a comprehensive 3-1 win, they ended up surviving by a thin margin of 3-2. The permissive attitude displayed in the closing stages of the opening game should have been interpreted as the early warning signs of things to come.

Indulgent towards the costly defensive mistakes, the fans displayed another important side to Serbian mentality that ended up costing Partizan their place in the knock out stage of the Europa League. Too accommodating, too tolerant, and too laidback in their on-pitch behaviour, Partizan flaws and mistakes were overshadowed by the positive result.

With Živković excelling, Partizan went on to record a surprising win in the next round as well. 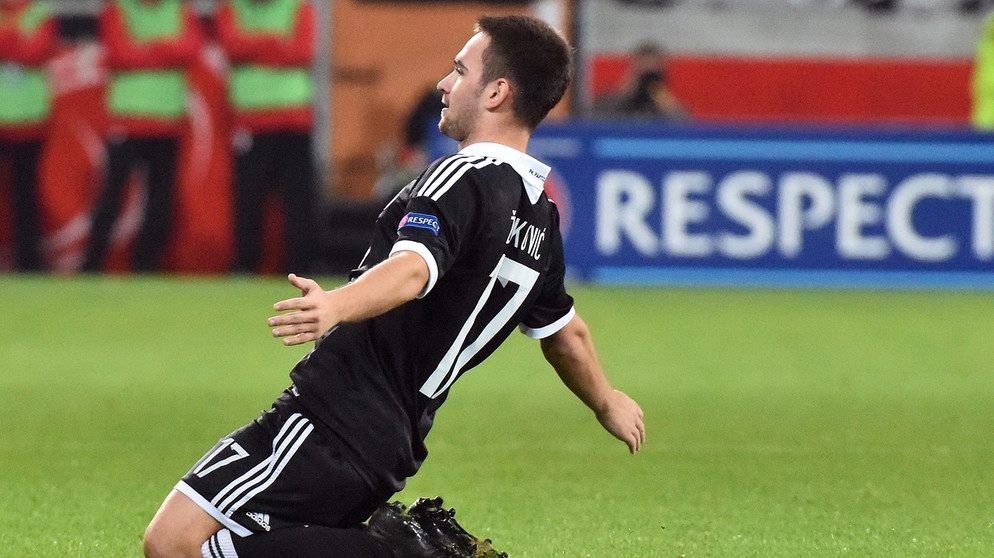 Partizan started well in the Europa League – Image via br.de

Their trip to Augsburg was a complete success both for the club and for Andrija Živković, whose brace took his tally to three goals in two Europa League matches, making Partizan winger the Player of the round.

Soaring to prominence with his impressive Europa League displays, Andrija Živković has attracted a lot of attention from clubs vying for his signature.

Regarded as one of the best youngsters to emerge from the renowned Partizan academy in the last couple of years, Andrija Živković was seen as more than a quality footballer by his club. He was seen as the chance to make profit, as the ticket to financial safety and stability.

Contract has Become a Political Matter

One can only imagine the surprise of the Serbian public when it was revealed that 50% of Živković’s contract had already been sold to the investment fund owned by none other than Pini Zahavi. Initially, it was thought that Partizan owned only 25% percent of the contract. Former Board member Ratomir Babić has this week publicised that the club had no other choice but to sell a share in order to survive the financial crisis—the struggles with late wages, staff strikes and debts.

Andrija Živković was, at that moment, sacrificed. The newly appointed management is now fighting tooth and nail to save their player, and are relying on Živković’s desire to remain in the club until the end of the season.

This desire has come under the spotlight since the club’s disappointing Europa League exit which occurred despite the exciting start to the campaign.

The drive began to falter with the 2-0 home defeat to Athletic Bilbao. Partizan’s dreams came crashing down upon the realization that desire and ambition themselves stand no chance against a well-organized opposition that will take advantage of your every mistake.

Innate resilience kicked in, however. The Serbs have a word for it—‘Inat’, the untranslatable word that expresses the core of every single Serbian’s being. It means defiance for the sake of defiance; it is the national characteristic of responding aggressively when backed up against a wall.

Partizan travelled to the Netherlands in November, eager to claim a win that would place them as a shoo-in for the knock-out stage spot. They succeeded with a 2-1 victory with Andrija Živković on the score sheet again, his fourth in the group stage.

With their fate in their own hands, Partizan were awarded an opportunity to nail the qualification with a home win over FC Augsburg in the final game of the Europa League group stage. 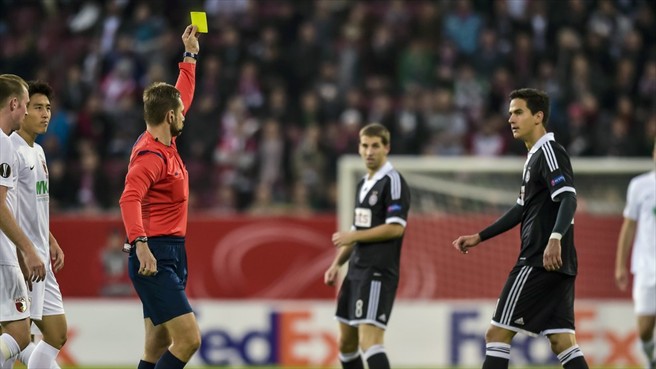 The Meltdown Against Augsburg – Image via UEFA.com

In contrast to “inat”, Partizan players, on the crucial night, behaved in a typical Serbian manner by ruining the foundation they had laid—by knocking down the house of cards while placing the final piece of the deck.

Once again, Partizan backed down when they were needed to demonstrate courage and quality.

Oumaru opened the account for the home side, but the late first-half equalizer from Hong Jeon-Ho saw the German side going to the interval neck-and-neck with the Belgrade club. Lack of will, lack of determination and concentration resulted in two more goals from the visiting team, with Paul Verhaegh and Raúl Bobadilla taking Partizan out of the equation.

Andrija Živković was expected to lead the pack to success, but he was dismissed for a handball with ten minutes to go in the match, leaving his team for a beating.

Days after the disappointing Europa League loss, the entire Partizan board have quit, leaving the sinking boat adrift.

Sitting fourth in the SuperLiga standings ahead of the winter break, 26 points adrift of the leaders Red Star, Partizan will most likely end up without the league title, without European football, and without many of the members of their current squad.

Andrija Živković could be the first to leave. His contract is running out, and is set to expire in the summer of 2016. With the ownership issue still unresolved, the talented striker might choose to leave in January which should not come as a surprise to the Partizan faithful.

Europa League elimination will play a huge part in his decision-making, and with clubs such as Chelsea and Borussia Dortmund monitoring the situation, and no competitive edge to hold him back in Serbia, Živković is apparently facing an easy decision.