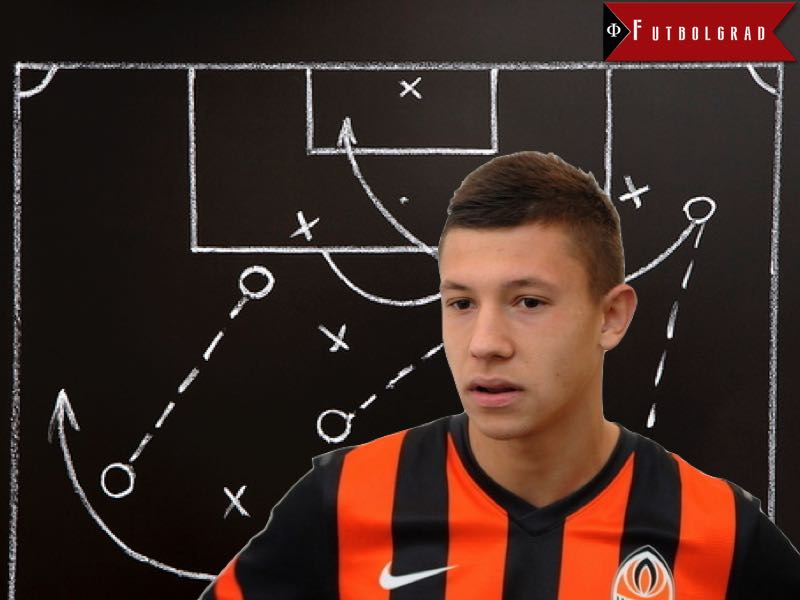 Andriy Boryachuk is only 20-years old, but the young Ukrainian striker from Shakhtar Donetsk has turned heads in recent weeks. The young forward debuted for Shakhtar on matchday 9 against Volyn Lutsk, and he capped off his 16-minute debut by scoring the final goal for Shakhtar in the 78th minute.

Boryachuk then had to wait almost a month before he was allowed to start for Shakhtar against Zirka Kropyvnytsky on matchday 12 of the Ukrainian Premier League. Once again Boryachuk was among the scorers, when he converted a high cross by Fred to make it 2-0 for Shakhtar in the 73rd minute.

Playing in a 4-4-2, Shakhtar head coach Paulo Fonseca placed Boryachuk alongside the Brazilian forward Dentinho. This was a rather unorthodox approach for the Miners, who usually play in a 4-2-3-1 or 4-3-3 formation with two natural wingers, and a strong forward at the centre.

In fact, one could see shades of a 4-2-3-1 formation in Shakhtar’s play, when Dentinho, and Boryachuk both dropped back to collect the ball deep, and therefore interchangeably play as a false nine.

This was made even worse by the fact that both Dentinho and Boryachuk are rather small but mobile strikers. Hence, Zirka’s slow and sluggish defensive line consistently struggled with this tactic, as the newly promoted side probably had difficulty tracking the movements of either attacking player.

It was, therefore, no surprise that Boryachuk was instrumental in Shakhtar’s first goal of the night as well. In the 35th minute, Shakhtar’s right winger, Marlos, received the ball on the right side just five meters inside Zirka’s half, and his pass found Andriy Boryachuk, who had just beaten the offside trap, and therefore had a clear passage towards Zirka’s goal. His shot was saved by Zirka’s keeper, Volodymyr Baienko, but ricocheted off Zirka defender Frederico Pereyra for an unfortunate own goal.

Facundo Ferreyra late made it 3-0 to cap off another great Shakhtar Donetsk display, as the exiled club moves toward recapturing the Ukrainian crown from their eternal rivals Dynamo Kyiv.

In what was an all-around impressive team performance by Shakhtar Donetsk, which seems to have undergone a small tactical revolution under Fonseca, who has moved away from the static wing play with a central forward, to playing several forwards at once that can interchange positions.

It is in this new tactical approach that Boryachuk certainly stood out, and the young Ukrainian had several chances to further rack up his tally. Regardless, the Ukrainian press responded with enthusiasm, and Andrei Fedchenkov from Tribuna.com later called Andriy Boryachuk the “Ukrainian Suarez”.

It might perhaps be a bit to early to compare the young striker to the Uruguayan superstar from FC Barcelona, who has recently won Europe’s Golden Boot, as the continent’s most prolific goal scorer.

On Wednesday, Shakhtar faced Oleksandriya in the Ukrainian Cup, and Boryachuk once again was in the starting line-up, but failed to score in Shakhtar’s 2-1 victory. Hence, the striker will have to work on his efficiency in front of the net if he wishes to become a regular starter for Shakhtar not only in the Ukrainian Premier League, but also in the UEFA Europa League.

Shakhtar fans, however, are certain that he is the future of the club and, in a poll conducted by Tribuna.com, 85% voted that Boryachuk rather than the Argentine striker Ferreyra should start for Shakhtar on a regular basis.