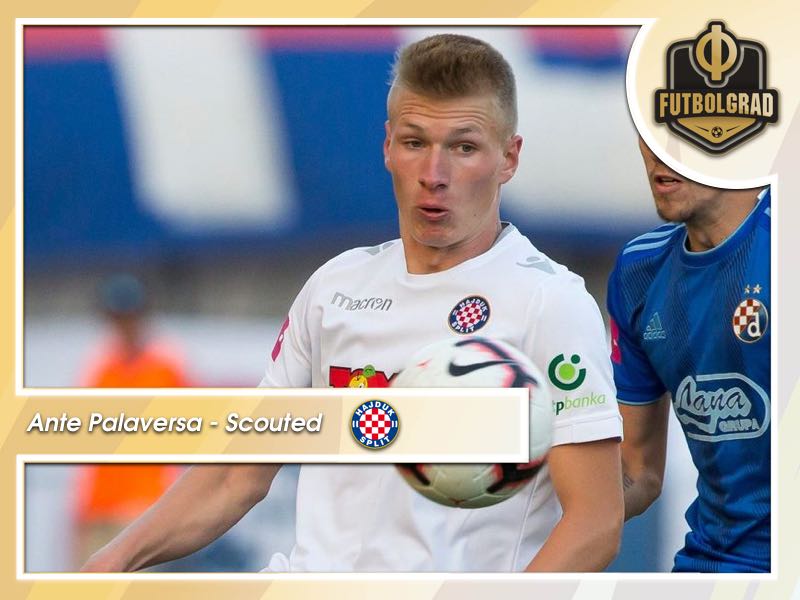 Gianluca Di Marzio of Sky Italia reported on Tuesday that Manchester City has agreed an €8 million deal with Hajduk Split for Croatia U-19 captain Ante Palaversa. This 18-year-old midfielder is one of Croatian football’s most promising youngster currently developed by Hajduk’s academy. And, as it seems, it’s possible for him to proceed with that.

According to Di Marzio, it’s likely for Ante Palaversa to stay at Hajduk until the end of this season, but it’s also not unimaginable for him to stay in Split for another year to develop accordingly.  Pep Guardiola is ‘bewitched’ by Palaversa and ‘sees Fernandinho in him’, making the young Croat a potential long-term successor for Manchester City’s important Brazilian midfielder.

First time I watched Palaversa was in Europa League second qualifying round when he got his debut against Levski. From the very moment he entered the pitch he looked like he knew exactly what he was doing. His gestures and footwork instantly described a player who feels confident with the ball in his feet. With the way he handles opponent pressing Palaversa gave away his probably most developed skill – responding to pressing.

Unlike Mateo Kovačić, his older colleague and compatriot, Palaversa can withhold opponents attack and press, but he’s a bit too slow to capture the space on the field that opens up when he frees himself. Nonetheless, his passing is good enough to overshadow that and allows him to win the space with long, mostly diagonal balls, across the field exposing opponents weaknesses. To simplify, he’s more Xabi Alonso than Mateo Kovačić.

Sauharda Karki from did well with describing Xabi Alonso’s play in his piece published on Outside of the Boot:

“Initially, Xabi Alonso held the role for the team, dictating from a deeper area, with a good sense of positioning, vision and a range of passing. He usually functioned in a midfield pairing with Khedira and Modrić shuffling in and out of lineups, in a supportive role alongside him. There’s no doubting the efficacy of the role and how well Alonso took to it. The only problem that seemed to arrive often was that with the rhythm coming from a deep role, the front three/four were often isolated from midfield tempo at times, and Alonso was not the sort of player to roam into pockets to close that tempo gap.”

This column you just read perfectly describes Ante Palaversa. You can call him poor man’s Xabi Alonso and you wouldn’t be wrong. Also, I’m pretty confident that he wouldn’t get offended too. He’s also more than capable to compete physically on Premier league level and with years to come his stamina can only get better.

One thing is for sure, a few years from now, maybe even months, Palaversa won’t be playing as  number 8 anymore. Time will come for him to leave Hajduk and then he’ll be redirected to number 6 as he is clearly tailored to play in this position. The fact that he wins almost 80% of encountered aerial duels in Croatian first league only adds to the pile of skills that make him the ideal number 6.

It remains to be seen if the acquisition of Palaversa affects City’s pursuit of a high-level number 6, with Fernandinho turning 34 in May, but will give Guardiola another long-term option to replace arguably the most important player in his squad right now.

The Spaniard’s team looks a lot more insecure, in moments totally numb in midfield when Fernandinho isn’t holding his position in it. Is it possible for Palaversa to elevate himself on a level that’s needed to get a chance in City’s first team? Maybe, one day. For now, Hajduk and his academy can keep doing a good job and hope for him to stay as long as possible.

Marko Jerleković is a 22-year old journalism student on University North in Koprivnica (Croatia), residing in Zagreb. He is currently working as a sports journalist for Net.hr, Croatian online media website. He is a huge Olympique Lyonnais fan and football enthusiast. You can find Marko on Twitter: @MJerlekovic