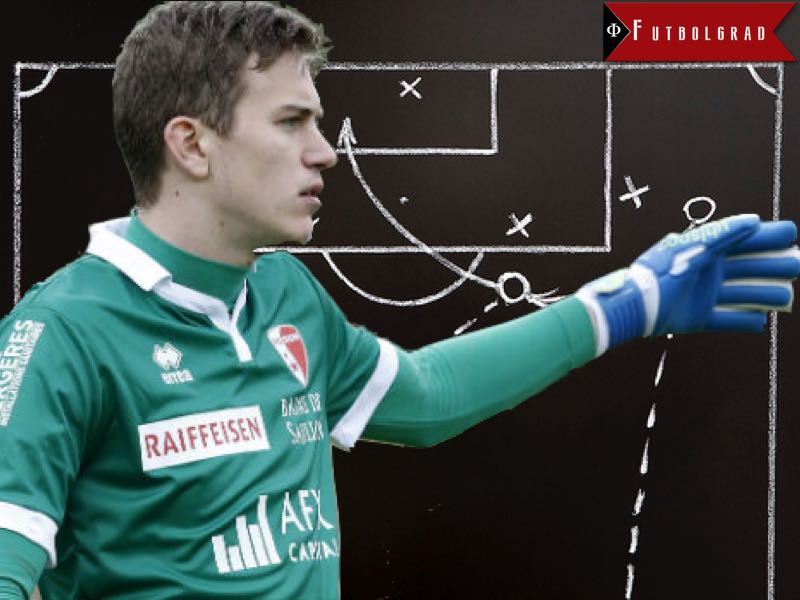 Anton Mitryushkin has long been considered one of the brightest goalkeeping talents in Russian football. But, nevertheless, his youth team side, Spartak Moscow, let him go in February 2016, as the talented 20-year-old keeper wanted to receive more playing time.

I remember seeing him play against FC Ufa in the 2014-15 season. The talent was evident but, at the same time, it was an unfortunate game for Mitryushkin to be given a chance by then head coach, Murat Yakin. Spartak had, at this point, already thrown away another season, as they were not only out of the title race, but also out of a Europa League spot.

Mitryushkin had for some time been hailed as Spartak’s future. At the UEFA Euro U-17 championship in 2013, Mitryushkin was a key reason for his country’s victory and he was awarded the Golden Player Award as the most valuable player of the tournament. He joins a long, and prestigious list that includes football greats such as Wayne Rooney, Miguel Veloso, Nuri Sahin, World Cup Final winning goalscorer Mario Götze, Cesc Fabregas, Bojan Krkić, and Toni Kroos.

Anton Mitryushkin responded well to a difficult situation at Spartak

Yet, the game against Ufa, which Spartak lost dubiously 2-1 to a team that needed three points to fight off relegation, may have not been the best time for Mitryushkin to show his skills. Indeed, it was perhaps the worst time for Mitryushkin to finally get playing time, as Spartak was once again looking at a lengthy rebuild with a new coaching staff and new management.

Mitryushkin, however, responded well to what was a difficult situation at Spartak. The keeper had been part of Russia’s U-19 team that finished second at the U-19 European Championships in 2015. Once again he was the decisive component for Russia’s success. Despite the fact that Russia lost to Spain in the final, UEFA.com gave the keeper a rave review, citing his stellar performance in the final, and the tournament in general.

Back in Russia, Mitryushkin, however, did not get the playing time he thought he deserved. In fact, the new head coach, Dmitry Alenichev, completely ignored the young Russian keeper and instead favoured Artem Rebrov. Mitryushkin, therefore, decided that it was time to move on.

Anton Mitryushkin’s move to Sion was a surprise

What happened next was a surprise, for Mitryushkin chose not only to leave Spartak, but Russia in general, by joining the Swiss Super League side FC Sion. The move initially appeared to be an odd choice, but Mytrushkin wanted playing time, and he felt his chances of achieving his goal would be greater if he joined a smaller club in a midsize league.

At first it seemed that his plan was not working, however, as he did not immediately become the first team starter at the club. In fact, it was not until the latter part of the season that Mytrushkin was able to take the number one spot at FC Sion from Latvian keeper Andris Vanins.

With Vanins gone, the starting position at Sion was his, and the young keeper did not look back, as he started in all of Sion’s 18 Super League matches this season. Furthermore, his club have raced up the table, and are currently third in the table. Perhaps the side’s only weakness have been goals conceded with 31 in 18 games.

That said, Sion also have scored the third most goals, behind FC Basel and Young Boys, in the Super League this season with 38 (1.67 per game). The club’s head coach, Peter Zeidler, does indeed place great emphasize on attacking football rather than on a tight defence.

Anton Mitryushkin has plenty of suitors

But despite this, Anton Mitryushkin has managed to record three clean sheets this season. In fact, the Swiss page, SportalNow, included Mitryushkin in a list of the most outstanding new comers of the season. The homepage, in particular, highlights Mitryushkin’s ability to stay calm in difficult situations, his anticipation, and also his build up play.

In addition, the homepage believes that major clubs will likely target Mitryushkin this winter. This is borne out back in Russia where it seems that Spartak have already realized their mistake of letting one of their brightest goalkeeping prospects go for €380,000, which in retrospect was a bargain. 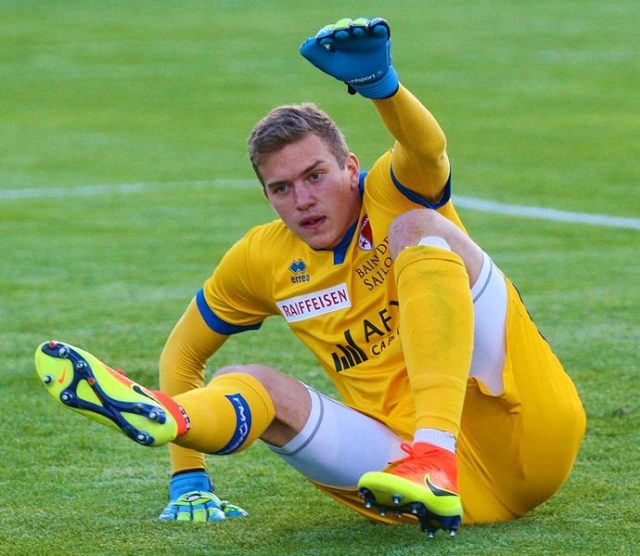 Anton Mitryushkin seldom found himself out of position this season – Vyacheslav Evdokimov CC-BY-SA-3.0*

Spartak have been one of the biggest surprises in the league this season but, at the same time, Artem Rebrov, while being a solid keeper, does not have the skill required to play the modern game required by head coach Massimo Carrera. There had been debate about bringing back Mitryushkin, but the club then learned that the young keeper had other options in mind.

Hence, Spartak signed the highly talented Aleksandr Selikhov from Amkar Perm for €3.5 million instead. Selikhov is a talented keeper and, without a doubt, has the potential to grow into a number 1 keeper at Russia’s most popular club. But given the fact that the club already had Mitryushkin, and let him go for a third of the price that they now paid for Selikhov is almost criminal, and shows that the Alenichev regime did not always have the best foresight for the club.

But Spartak are not the only Russian club looking to entice Mitryushkin back to mother Russia. Zenit, where both Yuri Lodygin and Mikhail Kerzhakov, have had a patchy season at the best of times, are also rumoured to be interested in signing Mitryushkin this winter.

A move to Germany beckons

Like Spartak, however, Zenit will have to look elsewhere—the Gazprom owned club is linked to several keepers including Krasnodar’s Stanislav Kritsyuk, and Rostov’s Soslan Dzhanaev—as Mitryushkin seems to have his heart set on a move to the German Bundesliga.

Mitryushkin’s agent, Mikhail Cherepovsky, recently told the Russian paper, Sport-Express, “At the moment the main priority for Anton is a move to the Bundesliga. We did not conduct negotiations with Zenit.”

Anton Mitryushkin has, in the past. been linked to Borussia Dortmund, who have scouted him on several occasions this season. But, given the fact that the young goalkeeper wants to have a chance to become a number one keeper right away, a move to Dortmund appears unlikely at the moment. 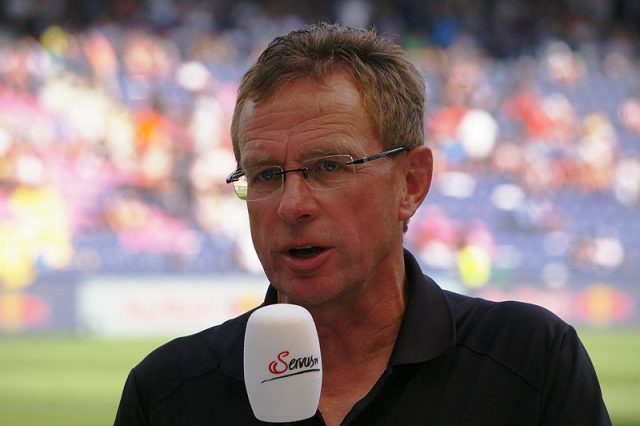 Ralf Ragnick has been adamant that he wants to target young up and coming players – Image by Werner100359 CC-BY-SA-4.0

Instead, the club most interested in signing him appears to be RB Leipzig. Leipzig’s sporting director Ralf Ragnick has been adamant on several occasions that Leipzig wants to become the top address for young players, who can grow with the club.

Leipzig’s head coach, Ralph Hasenhüttl, prefers to play high pressing attacking football and, while current keeper Péter Gulásci has been playing a solid season, the 26-year-old does not always look like the prototype of a modern keeper. Here, Mitryushkin would certainly be an upgrade, as the 20-year-old is very good in playing the sweeper keeper role.

Usually a big downside for Russian players has been their difficulty adapting to playing away from Mother Russia. Mitryushkin, however, has now played a full year in Switzerland and, therefore, will not experience a massive culture shock by moving to Germany.

Finally, the move would also make sense for Mitryushkin’s development. At Leipzig, he would find an environment that could help him grow into a solid number 1 keeper, not only in Germany, but also in Russia long term as a replacement for Russia’s current number 1, Igor Akinfeev.

*Copyright (c) MANUEL VETH. Permission is granted to copy, distribute and/or modify this document under the terms of the GNU Free Documentation License, Version 1.2or any later version published by the Free Software Foundation; with no Invariant Sections, no Front-Cover Texts, and no Back-Cover Texts. A copy of the license is included in the section entitled “GNU Free Documentation License“.