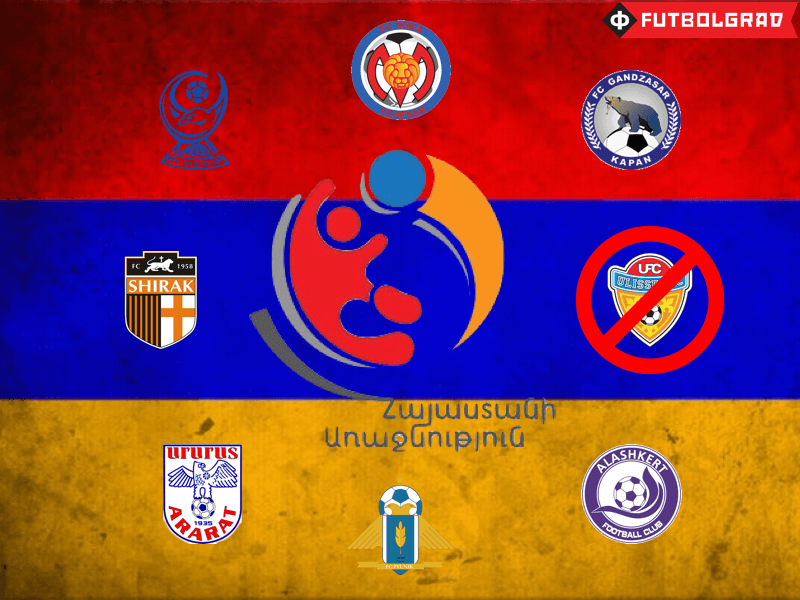 The Licensing Committee of the Armenian Football Federation has revoked both the national and UEFA licenses of the Yerevan based club FC Ulisses. The club had announced earlier that it was leaving the Armenian Premier League due to financial problems. The Armenian Premier League is now the smallest national league in Europe, but that is not the only piece of bad news. According to the French newspaper L’Equipe, the league is also on the verge of losing its professional status, because there is no club to fill the gap from the First Division, and there are rumors that UEFA considers any league with less than eight teams as an amateur competition.

FC Ulisses was founded in 2000 and they won their first Armenian Premier League title in 2011, thereby ending FC Pyunik’s ten years of dominance. But three years after winning the title, the club faced financial difficulties and there were doubts as to whether they would be able to compete in the 2014-15 season. Their savior was found just two weeks before the kick-off of the championship. Valeriy Oganissian, an Armenian football agent and businessman, bought the club and quickly collected a squad, which included some local, but predominantly foreign players. They were good enough for the level of the Armenian Premier League and topped the league during the first part of the season. In the end, however, Ulisses failed to keep up the pace, but they had been one of the most spectacular clubs of the championship and consequently secured second place as well as a UEFA Europa League spot. 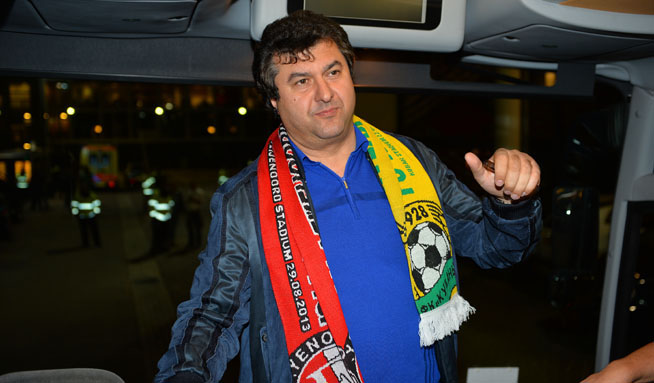 After the season ended, however, chaos erupted, when Birkirkara F.C. from Malta kicked FC Ulisses out of the Europa League Qualifying round. After securing a goalless away draw, the Armenian side then lost 1:3 at home, which was a shock for the Armenian fans. Soon after this loss, Oleg Mkrtchyan named Valeriy Oganissian general director of FC Torpedo Armavir—one of the newest ambitious football projects in Russia. Oganissian then took the entire Ulisses squad with him to strengthen the Armavir side, a move which left the Armenian club with several unexperienced players. Although some foreign players did join the club before the start of the season, it was clear that FC Ulisses was no longer a priority for Oganissian. Soon, the team’s lack of motivation and focus was demonstrated also by its performance and results; FC Ulisses collected just 2 points during the 15 games of the season.

In the middle of October the majority of the foreign players left FC Ulisses due to salary delays and non-payment—a consequence of the club’s financial difficulties. Then Valeriy Oganissian resigned from his post at FC Torpedo Armavir. FC Ulisses played the last games of the autumn with second team players. In the Armenian television show Football’s Hour, FC Ulisses’ representatives revealed that they did not receive any payment and, without training or preparation, played in order to finish the first part of the championship. The hope was to find some sources of financing would be found during the three month-long winter break. 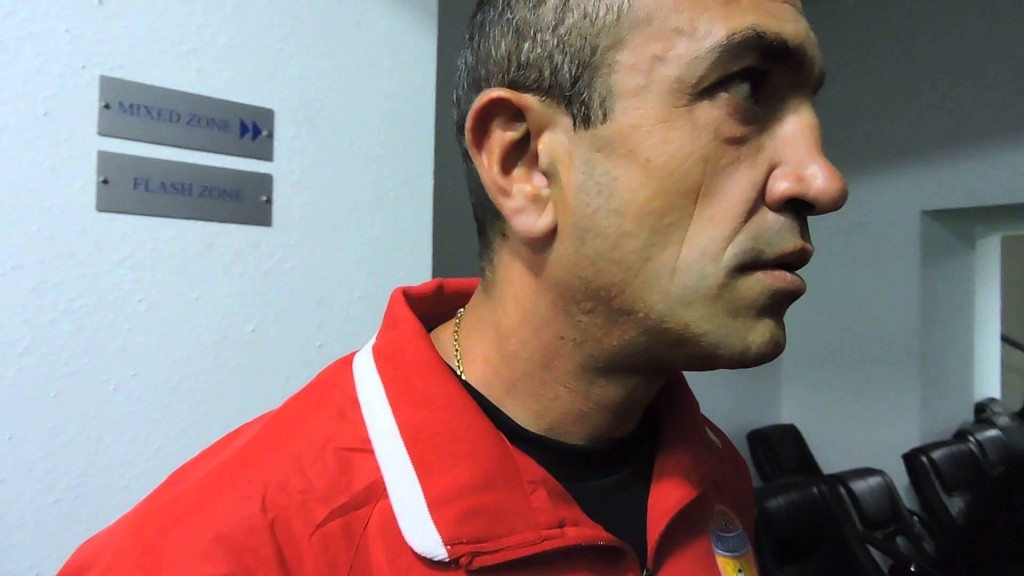 At the same time, Armenian Football Federation president, Ruben Hayrapetyan, announced that UEFA suspected eleven FC Ulisses’ senior and B team members of match fixing. Two months later, The National Security Service of the Republic of Armenia announced, that four FC Ulisses’ representatives, including Head Coach, Gagik Simonyan, and the player, Hayk Hunanyan, had been arrested by the Security Service and were suspected of placing bets of between $1000 and $3000, and that they had shared the profits with the rest of the team.

Then on February 3, the FFA started proceedings to exclude the FC Ulisses from the Championship. Shortly thereafter, Valeriy Oganissian announced that they had not been able to find sponsors and that they would have to leave the league anyway.

ARMENIAN PREMIER LEAGUE – THE SPECTER OF THE AMATEUR LEAGUE

The Armenian Premier League will resume on March 2 with 7 teams—the lowest number of clubs in any European League. The results of FC Ulisses will not be annulled, however, as the team has played more than 50% of the games of the season. The league’s weekday fixtures will be reduced to just three matches, and one of the teams will have a break each week, thereby adding an easy 3 points to their account, thanks to a technical victory.

This development exacerbates an already existing problem in professional Armenian football—there have already been too few teams to properly conduct a championship. As of 2014, there have been only eight professional football clubs in Armenia, which meant that the First Division (second league) completely comprised the second teams from the Premier League clubs. This meant that Armenian club football had no promotion or relegation, as second clubs could not play in the Premier League. The fight against relegation in Armenia came to have a new definition: if you survive financially till the end of the season, you win the fight. 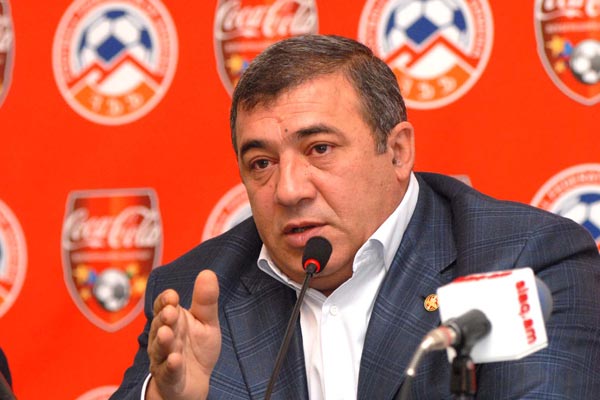 Ruben Hayrapetyan has promised the creation of more teams for the Armenian Premier League – Image via armenianow.com

The fate of the current season is now clear, but what lies beyond that is a question mark. There is no club in the First Division that can fill the league. Earlier, Ruben Hayrapetian said that projects were underway to found clubs in Vanadzor and Dilijan, but even if they accomplish this in the coming months, how can these clubs reach the Arminian Premier League without going through the First Division route? Without them, the Armenian Premier League is at risk of becoming an amateur division according UEFA definitions. This could mean that Armenia may lose its starting positions in UEFA competitions—but Futbolgrad has spoken with representatives of UEFA, who have told Futbolgrad that Armenia is currently not in danger of being excluded from UEFA competitions.

Furthermore, the FFA insists that UEFA will not remove the professional status of the league. Despite the fact that the Armenian Premier League is going to maintain its presence in European cups, a seven-team league does not look like a serious platform from which to develop football in the country. Losing a team leads to a league of just 24 rounds, and the players will suffer from a lack of regular competitive football. The Armenian Premier League is now just 48th on the UEFA ranking for club competitions and the latest news does not promise a positive outcome.