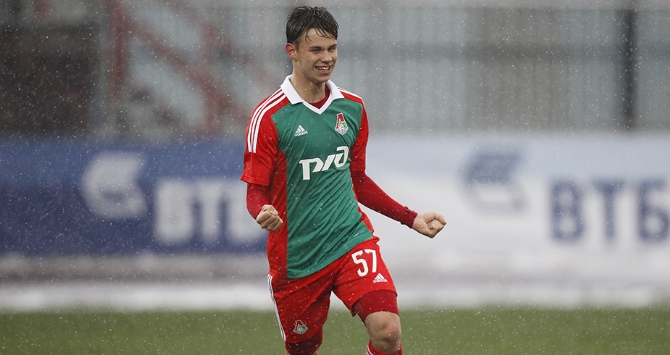 On October 7 the Guardian published a list of 50 best young talents in world football. Despite the recent successes of Russia U-17 and U-19 teams, Artem Galadzhan was the only Russian included. Why was he chosen?

Galadzhan was born in Novorossiysk, a Russian city on the Black Sea coast. At the age of 12 he moved to Moscow to enroll at CSKA Moscow’s youth academy. Yet Galadzhan was unable to impress at CSKA and was forced to leave the academy, but one man’s trash is another man’s treasure and Galadzhan signed for Lokomotiv Moscow.

Then two years ago Galadzhan started to score regularly for both Lokomotiv’s youth team and the Russian junior national teams.

At that time Artem Tsalon, an expert on Russian youth players, compared Galadzhan to Ruud van Nistelrooy, stating that Galadzhan is “strong, well-built, [and] can kick the ball with both his feet, but most important of all—he understands, that the ball crossing the goal line is the most important thing, and that it doesn’t matter how the ball crosses the line.”

This season Galadzhan scored 8 goals in 15 matches for Lokomotiv’s youth team, and is just two goals behind the league’s top scorer. Galadzhan is also the most likely candidate from the youth team to move to Lokomotiv’s first squad. Along with Alexey Miranchuk—another bright Lokomotiv prospect—Galadzhan has become the new hope for Lokomotiv fans.

The accolades kept coming as Galadzhan captained the Russia Under-17 team at the first group game at this year’s Euro Under-17 Championship. But surprisingly, that game would also be his last for the U-17 team. Galadzhan didn’t participate in any of the remaining games. Moreover, he wasn’t called up to the national team for the Under-17 World Cup in Chile. Russia’s head coach Mikhail Galaktionov said to Sport-Express: “There were reasons for that. There is no punishment without guilt”.

According to Galadzhan, Galaktionov wanted him to “take away the ball, dribble past 10 men and score” although one could argue that the job description of a natural striker does not necessarily include gaining possession of the ball.

Earlier this summer, Galadzhan expressed his hope to become a regular starter for Lokomotiv Moscow in the Russian Premier League after watching several games from the bench.

There is no doubt that Galadzhan has a future in Russian football. He is a technical player, he has great vision, and his goal scoring ability is top class. He is the best product of the Lokomotiv Academy since Aleksandr Kokorin.

But there have been many talented Russian players, including Aleksandr Kokorin, who have played well below their potential due to personality issues. Artem Galadzhan could also fall into that category, as he hasn’t achieved much success in his career, but already behaves like a prima donna. Galadzhan’s attitude may therefore be his biggest obstacle, and the real reason why he was left out of Russia’s U-17 squad in Chile, but with the right management Galadzhan could indeed become a bright star for both Lokomotiv and Russia.