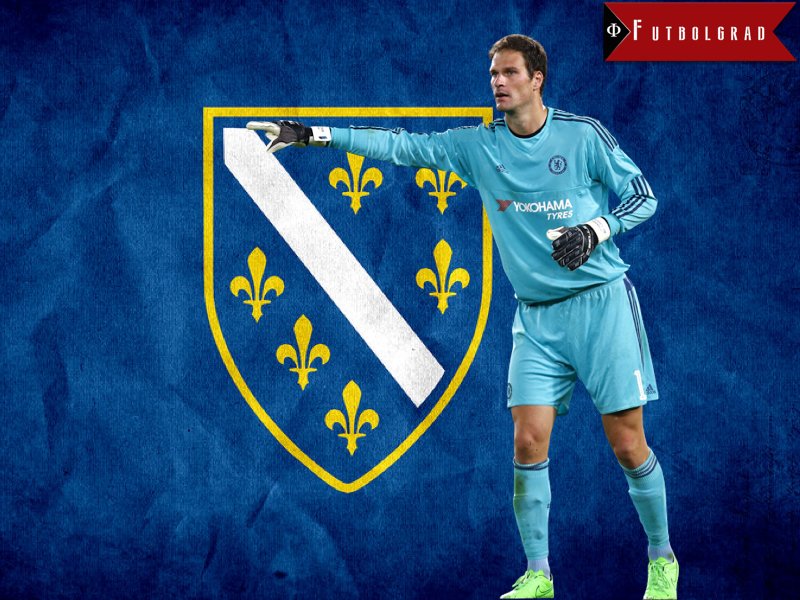 Asmir Begović – Anything but an Afterthought

During halftime an unlikely voice thundered in the locker room, and in the end, motivated the team to overturn the result for an incredible 2-1 win. Bosnia would go on to qualify for the World Cup in Brazil, to the elation of hundreds of thousands of fans. That thunderous voice in the locker room belonged to an unlikely man—Asmir Begović.

The usually quiet and composed goalkeeper rallied the troops when it mattered most. Beyond his serious goalkeeping ability, perhaps this is what ultimately sold then Chelsea coach José Mourinho on the Bosnian keeper. The leadership and maturity level that appeared hard to replace when Petr Cech left the club for cross-town rivals Arsenal in the summer of 2015, was again present with Begović.

Despite this Begović is often brushed aside in the media as a mousy backup—too timid to establish himself as the true number one or lead a defense. Nothing could be further from the truth.

With Begović’s life story and career path, the result would always remain the same—resilience. Begović’s family fled the brutal Bosnian war and genocide of the 1990s to arrive in Canada and make a new life. The young Asmir took to football, as he played for the Southwest Sting in his new home in Edmonton, Alberta.

Aged 18 Begović left for England to play for Portsmouth, but often found himself loaned out to lower division clubs in the country. Then in 2010, Begović was sold to Stoke City, where he would establish himself as one of the best English Premier League goalkeepers, replacing the Danish veteran Thomas Sørensen. Begović won the 2012-13 Player of the Year Award at the club, and set a new record when he scored a goal from 91.9 meters against Southampton. Did he celebrate it? No. He kept his head down out of respect for his opposite number one, Artur Boruc.

In the summer of 2015, Begović arrived at the London based club Chelsea FC, who purchased him for £8 million. At Chelsea he has gone through stretches of excellence, but lately, found himself caught in a no-man’s land of uncertainty, much like the rest of the players at the club.

Begović’s form dipped at times, and he was often the scapegoat for some of the problems plaguing the football club during the worst season of the club’s recent history. Despite the problems he has faced, Begović has soldiered on without complacency or ill will towards management or fellow players.

The Begović that is portrayed in the English media is not the one that Bosnian fans know and love. Every player goes through stretches of bad form—this is natural. The argument, however, that Begović could never be the true number one at a club like Chelsea might not be a fair assessment.

Begović led Bosnia and Herzegovina to its first World Cup as the first choice goalkeeper. Furthermore, his life story is one of resilience, and has more than prepared him for the challenges of being a number one keeper at a top club. As far as his career is concerned, Begović has won the job wherever he’s gone.

Quiet? Perhaps. But the best leaders have led by example. If Chelsea is to rebuild their team and restart a winning tradition again, they need men like Asmir Begović in the squad. Leadership doesn’t have to be false bravado. True leadership is resilience, and the ability to lead others through it. Chelsea needs this more than ever now.