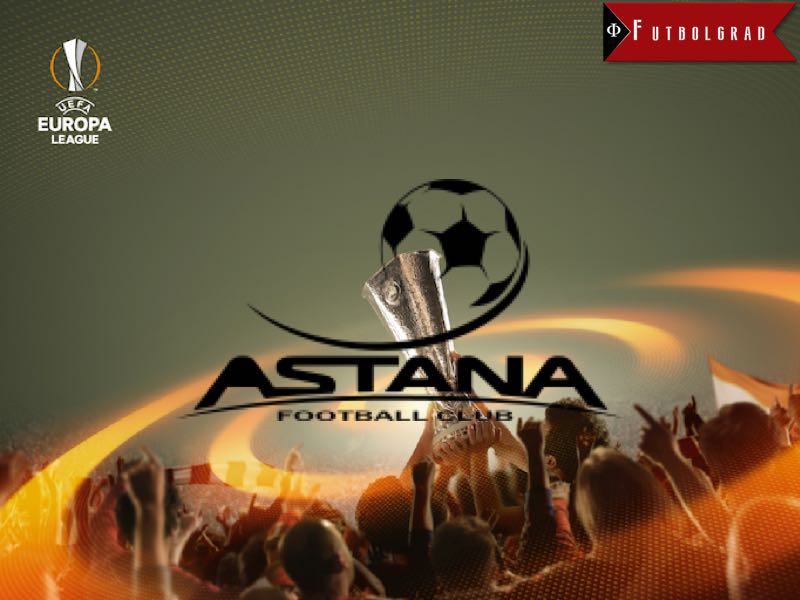 Astana was formed in 2008 after two clubs—Megasport and Alma-Ata—merged to create a new club for Kazakhstan’s young capital Astana. Until 2011 FC Astana was named Lokomotiv Astana, but the club’s international ambitions were underlined when the club was given the more internationally recognized name Football Club Astana. Champions League football last season has now helped to put the club, and Kazakh football in general, on the map. Club officials hope that Europa League football this season will further help the club to grow internationally, and as a result help to promote Kazakhstan on the world stage.

The most prominent player is Nemanja Maksimović, who received his footballing education in Serbia at Red Star Belgrade. Maksimović moved to Kazakhstan via Hellas Verona (Itlay), and NK Domžale (Slovenia), which sold Maksimović for €2 million to FC Astana in February. Now just 20 years old Maksimović can claim that he is a football hero in two countries, as he scored not only the deciding goal for Serbia in this year’s U-20 World Cup against Brazil, but also the all important equalizer in Astana that secured Astana’s Champions League spot as the first club from Kazakhstan. Another player to watch out for is the robust Colombian midfielder Roger Cañas, who keeps organizes the defensive aspects of Astana’s midfield.

In 2013 the club became part of the Astana Presidential Sports Club, a multi-sport federation, which acts as the parent organization of various sport clubs in the capital. These include: the ice hockey team Barys Astana, the Basketball Club Astana, the boxing club Astana Arlans, and the bicycle team Astana, which regularly competes in the Tour de France. The club receives its funding from the National Welfare Fund Samruk-Kazyna, which owns, either in whole or in part, many important companies in the country, and is estimated to be worth $78 billion.

Last season Astana was the easternmost qualifier to the Champions League, and had to travel 6200km to Lisbon for an away game. This year Astana is the easternmost qualifiers of the Europa League, and trips to Switzerland, where they will play against Young Boys Bern, Cyprus, against APOEL FC, and Greece, against Olympiacos FC, will still provide logistical challenges for all clubs involved. Astana’s longest trip will be to Bern, as the two cities a separated by almost 5,500 kilometers—a flight between the two cities takes almost 6 hours.

Astana’s shortest trip will be to Cyprus but even then the two teams will still be separated by 3500 kilometers. For away teams this means that they have to deal with long travel times, and time difference (four hours between Bern and Astana). Last season Astana remained undefeated in three home games, as they managed ties against Benfica, Atlético Madrid, and Galatasaray.

Much will depend on whether Astana can once again turn the Astana Arena into a fortress. All three opponents have plenty of experience in European football, and for Astana to qualify for the next stage will be a tall order. On the other hand if the club manages to win one or two games at home, and can get a result in places like Cyprus a second place finish is not out of question.

“FC Astana – Reaching for the Stars in Kazakhstan”

“Serbia’s Golden Generation – What Happened to the U-20 World Cup Winners?”