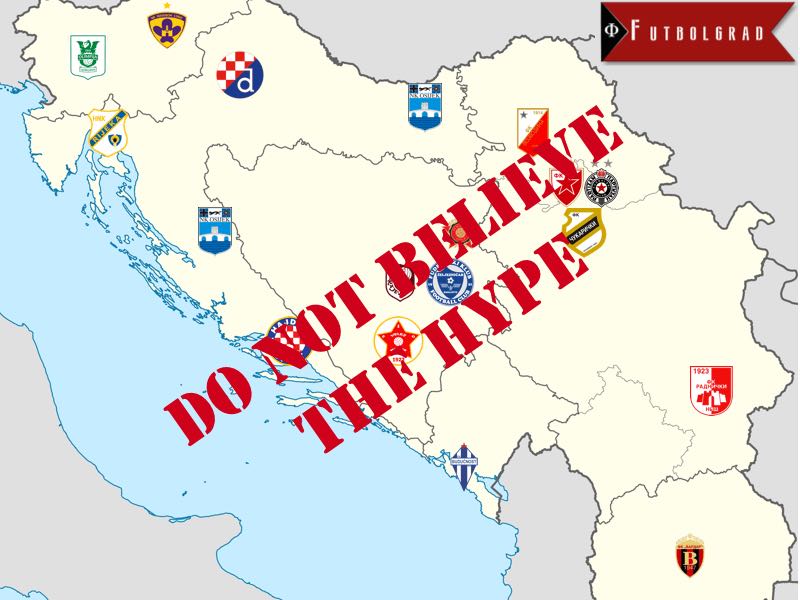 Balkan League – Do not believe the media hype

“Once cut into pieces an apple can never be whole again”

Rough translation of the Serbian colloquial proverb offers a descriptive insight into efforts that have seen the football regulatory bodies of the former Yugoslav countries come together to form a unified regional Balkan League. Such a league would be built around a similar model, which had been successfully adopted in basketball and is expected to follow in other sports such as boxing. 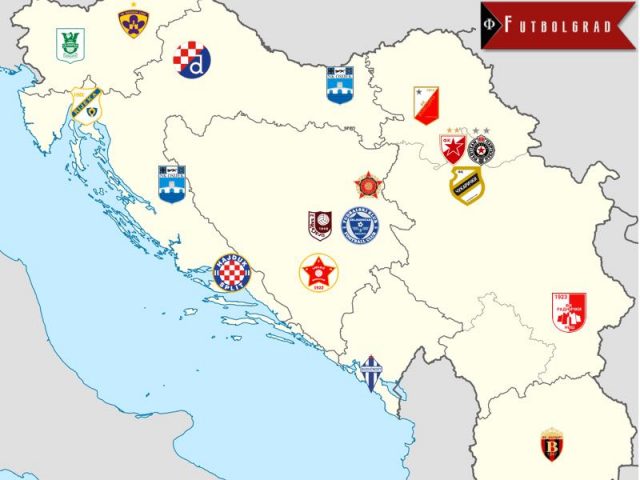 This is what a potential Balkan League could look like

A model which, from the current timestamp has all prerequisites to become an utter failure.

Beginning of an End

The breakup of Yugoslavia was both a long-brewed process, and a single point in the country’s history. It was also a football-related point that is universally accepted as the breaking point.

It occurred on May 13, 1990, when the Croatia heavyweights welcomed Belgrade’s greatest, Crvena Zvezda, in an abandoned match at Stadion Maksimir.

Yugoslav football clubs—subsequently both Serbian and Croatian—have always been closely tied to political structures in their respective countries. And with the first-ever multi-party elections in the country in 1990 resulting in the rejection of communism in favour of adopting a more national-oriented approach, tensions between the fiercely-contested clubs Dinamo Zagreb and Crvena Zvezda were given a new—highlighted dimension.

Around 3,000 Crvena Zvezda fans—the notorious Delije (Heroes)—made the trip to Zagreb to support their team and, above all, to confront the Bad Blue Boys. Following widespread clashes in the streets of Zagreb, Dinamo Zagreb supporters pelted their opposition with stones at Stadion Maksimir, thus provoking utter chaos both in the stands and on the pitch itself.

The Crvena Zvezda players wasted no time in leaving the field, whereas a couple of Dinamo Zagreb players remained.

Never imagining that his move would go on to have such a symbolic effect and become a cultural phenomenon, legendary Dinamo Zagreb captain, Zvonimir Boban, kicked a police officer, Refik Ahmetović, who was allegedly mistreating a Dinamo fan.

This incident came to represent the struggle against oppression and saw Boban become a national hero in Croatia and a hated nationalist in Serbia.

Twenty six years later, the tensions in the political relations between the two countries have not been relieved of any pressure whatsoever and many football fans are wondering why the initiative to form a Balkan League would gain momentum at this particular moment.

UEFA not Involved in the potential creation of a Balkan League

Representatives of football associations of the former Yugoslav republics met in Moscow earlier in December to discuss the idea of a competition unofficially referred to as the Balkan League.

An experimental project has been proposed which would involve youth sections of the 24 football clubs from Serbia, Croatia, Slovenia, Bosnia & Herzegovina and FYR Macedonia.

The League is supposed to start in the autumn of 2018 when all of the teams eliminated from the European club competitions would be automatically included in the group stage of the regional competitions—consisting of six groups of four teams.

UEFA, as the European governing body, was believed to be standing firmly behind this project and behind the meeting in Moscow, however it remains unclear to this date who initiated the get-together in Russia.

The newly elected UEFA president, Slovenian Aleksander Čeferin, rejected any links between the European governing body and the attempted initiation of the Regional League:

“A local functionary must have presented this as an idea and it gained momentum through the media.”

“UEFA had no part in any negotiations regarding the Regional League. There are no financial assets prepared for such a competition. We received various propositions regarding inter-state leagues and we are not excluding the possibility of a similar competition being formed in the future, but it does not mean that only former Yugoslav republics would be included in such a project”, Čeferin told N1.

Contrasting Reports and the Media Bubble

As the idea of a Balkan League once again gains momentum, media pressure plays great part in blowing the bubble that could end up bursting in everyone’s faces.

Soon after the meeting in Moscow, another proposition saw the light of the day—a proposition that revolved around a projected system that would include 42 clubs from 13 countries. Contrasting reports and the lack of clear support from the UEFA officials resulted in an increase of media speculation, which fed the far-fetched and unrealistic idea.

The year 2018 may seem like a long way off, but any regional league in full senior format is unlikely to be initiated by that deadline, more so because football clubs from the Balkan region will be first required to present a clear plan as to how the main issues would be resolved.

Security and match organisation—together with decaying infrastructure—remain weak points of Serbian football. The well-documented drone incident that occurred at Serbia’s game with Albania is just another warning sign.

And while Crvena Zvezda president, Zvezdan Terzić, refuses to comment on the subject until the Serbian FA reach a final and official decision on the matter, Partizan president, Milorad Vučelić, was quite vocal in expressing his opposition.

“There are two segments of the proposed idea that worry me most – security and development of international football regions instead of domestic ones. I am not in favour of Serbian clubs taking part in aiding the development of neighbouring republics. We should not stifle our country, instead we should nurture and develop our own football centres. I would rather we played in Niš than in Široki or Maribor”, Vučelić told local media.

“The Croatian football league is the priority for Dinamo. We have no interest in participating in a regional league, particularly in the one currently being proposed by the media,” Dinamo Zagreb reacted. Hajduk Split did not want to comment on mere speculation.

Concluding the hot subject that is too far from realisation to be even remotely considered at this point in time, one has got to ask whether the insatiable hunger for sensational stories had anything to do with the introduction of the topic at the moment when Serbia and Croatia’s bilateral relations took a giant step backwards.

Namely, midway through December Croatia blocked the opening of negotiation regarding chapters 23 and 24 in Serbia’s EU accession talks.

Don not believe the hype.