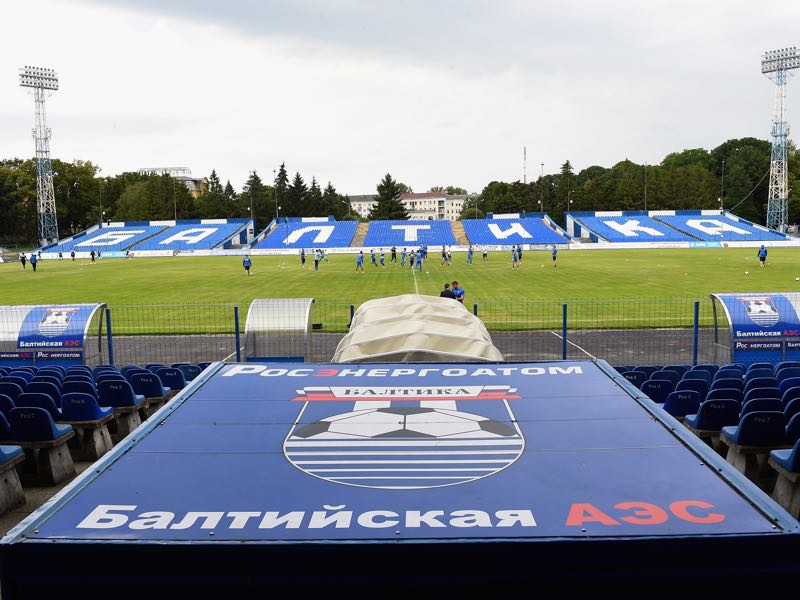 Spread over nine zones and reaching from the Baltic Sea enclave of Kaliningrad all the way to Vladivostok on the Pacific Coast, the Russian second division provides one of the toughest logistical challenges in world football.

There are added challenges for a club like Baltika. Located in the tiny enclave of Kaliningrad, which is awkwardly situated between Lithuania and Poland, Baltika has to fly to all its away games—not including border crossings, Kaliningrad is, for example, a 15 hour drive from Moscow.

It is, therefore, no surprise that Russia has gone out of its way to assert its ownership over the enclave. The political importance of the city and of the region in general, was also one of the reasons why Kaliningrad was included in Russia’s 2018 World Cup bid. 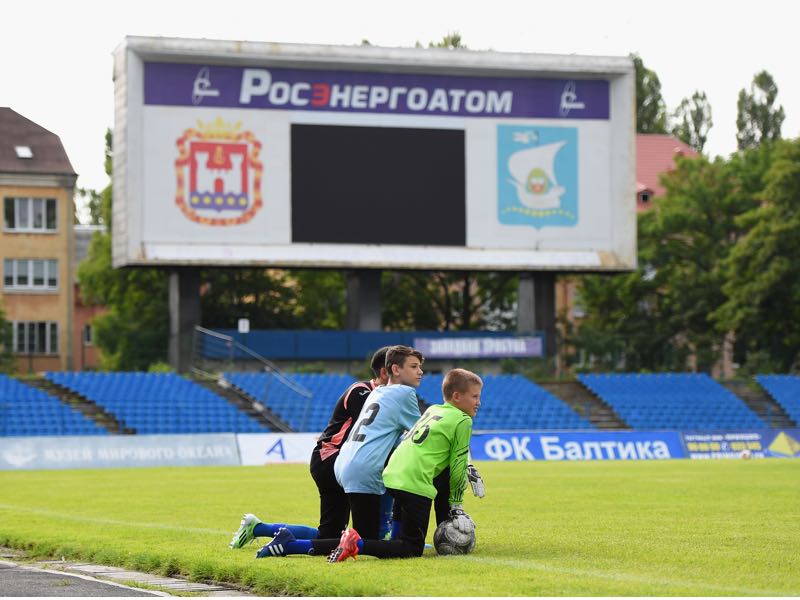 Children look on during a training session at FC Baltika Kaliningrad Stadium during a media tour of Russia 2018 FIFA World Cup venues on July 18, 2015 in Kaliningrad, Russia. (Photo by Laurence Griffiths/Getty Images)

As part of Russia’s World Cup bid, Kaliningrad is in the process of constructing a new 35,000 seat arena. As was pointed out in World Football Index – Futbolgrad Podcast World Cup Special, however, the stadium is in danger of becoming a white elephant due to the fact that Baltika are in danger of being relegated to the third division.

With 14 games left in the season, Baltika Kaliningrad are currently ten points away from reaching 15th spot, which would mean safety at the end of the season. Avoiding relegation is therefore almost an impossible mission this season.

Baltika’s owner, the Kaliningrad regional administration hopes, however, that Olga Smorodskaya can introduce the necessarily professional structures that can see the club not only return to the FNL next season, but also, perhaps, eventual promotion to the Russian Football Premier League.

Baltika Kaliningrad played three seasons in the RFPL between 1997 and 1999, but has mostly bounced between the third and second divisions since being demoted at the end of the 1999 season. The Futbolgrad Network visited the club in the mid 2000s and, at that time, the club was still largely using facilities that dated back to the pre-World War II era when Kaliningrad was part of the German Empire.

Smorodskaya certainly has the experience to professionalize Baltika Kaliningrad, but the administrator, who was the president of Lokomotiv from 2010 to 2016, is not without controversy.

At Lokomotiv she was given one of the largest budgets of the Russian Football Premier League but, aside from a Russian Cup victory in 2015, had very little to show for it in terms of success. Not shy of having her voice heard, Smorodskaya never hesitated to speak out at RFPL meetings.

A mountain of work would await Olga Smorodskaya

Be it on the curbing of spending on player’s salaries or the controversial foreign limitation rule, Smorodskaya vigorously spoke her opinion. This was especially remarkable in the male dominated Russian macho football culture.

Her outspokenness could not, however, save her position at Lokomotiv, especially when the owner and sponsor, the Russian Railways, were looking to cut spending at the club. Many believed that Smorodskaya would not return to Russian football when she left Loko in 2016.

Now, she might be given the chance to restore her reputation by making the impossible possible, and establishing a permanent professional team in Russia’s vital Kaliningrad oblast. Funds will certainly not be an issue, as the Kaliningrad oblast and the Russian government have a strong interest in the success of the club.