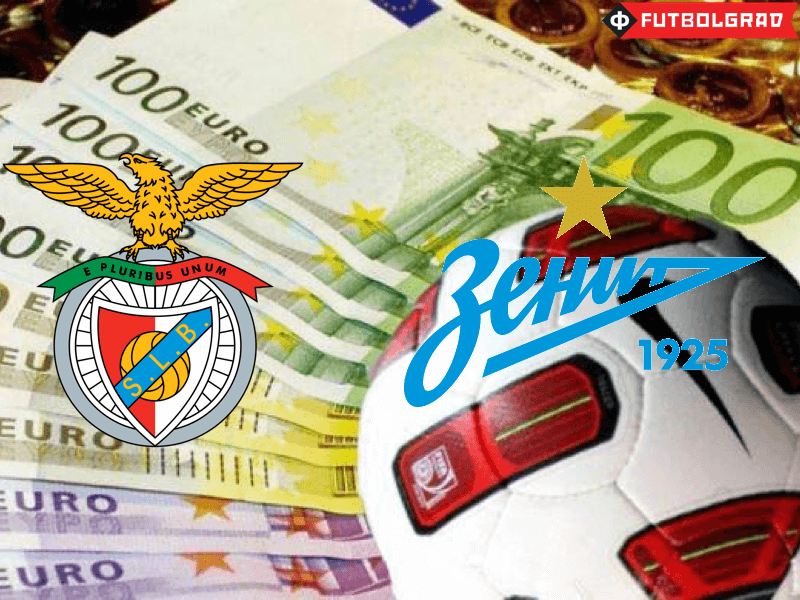 Benfica vs Zenit Saint Petersburg might very well be called the Football Leaks derby. In recent weeks two major transfers between the two clubs have been leaked by the football transparency page—Axel Witsel’s September 2012 transfer from Benfica to Zenit, and Ezequiel Garay’s 2014 summer move from Benfica to Zenit.

Now the two clubs will be facing each other in the Champions League round of 16, with the first leg to be played today in Benfica Lisbon’s Estádio da Luz.

The two clubs have only met once, when Benfica beat Zenit 4-3 on aggregate in the 2011/12 Champions League season. Zenit had won the home match 3-2, but then lost in Lisbon 2-0. Amongst the goal scorers was Nélson Oliveira, who on that day must have impressed Zenit’s management enough for the Russian club to secure an option, until February 1, 2013, to buy the than 20-year-old Oliveira (who now plays for Nottingham Forrest in England’s Football League Championship) as part of the above mentioned Witsel deal for €30 million.

Although, in the end, Zenit chose not exercise the option on the young Oliveira, Zenit will most likely feature three other former Benfica players tomorrow. In addition to the above-mentioned Witsel, and Garay, the Spanish defender Javi García has also played for Benfica.

Furthermore, on paper, Zenit appears to be the slight favourite going into the competition. According to the transfer page transfermarkt.de Zenit have an overall transfer value €198.6 million as opposed to Benfica’s transfer value of €148.7 million. Zenit, however, has the disadvantage that the match on Tuesday will be their first competitive match for this calendar year, as the Russian Football Premier League is still in its long winter break.

Meanwhile, Benfica—the club is currently second and just three points behind city rival Sporting Lisbon in the Liga Zon Sagres—has no major winter break to worry about, as the Portuguese season is in full swing at the moment. Furthermore, on Friday, Benfica lost to third placed FC Porto, who now are just three points behind Benfica, and Russian experts believe that the Portuguese club will go with some anger into Tuesday’s matchup against the Russian club.

Before the Champions League group stages, Futbolgrad believed that Zenit would have a hard time qualifying for the round of 16, and that getting out of the group stage would be a major success. Then Zenit won five out of six matches in the Group stage, and qualified easily for the next round. Hence, the feeling is now that anything other than qualification for the quarter final would be a disappointment.

Yet, the fact that the matchup against Benfica is the first game for Zenit this calendar year could be a major disadvantage for the Russian club. Villas-Boas has stated that a draw in Lisbon would be an ideal result. The return match will be on March 9 in Saint Petersburg, and will be Zenit’s third match of the calendar year. In 2014, Zenit drew Borussia Dortmund in the round of 16 and, as it is today, the first leg was Zenit’s first match of the calendar year. Dortmund managed to defeat the club, that seemed to be out of match practice, 4-2 in Saint Petersburg. A few weeks later, Zenit almost overturned the result in Dortmund when they beat the Germans 2-1. Hence, with or without match practice, having to overturn a big deficit from a first leg is a situation that must be avoided by Zenit.