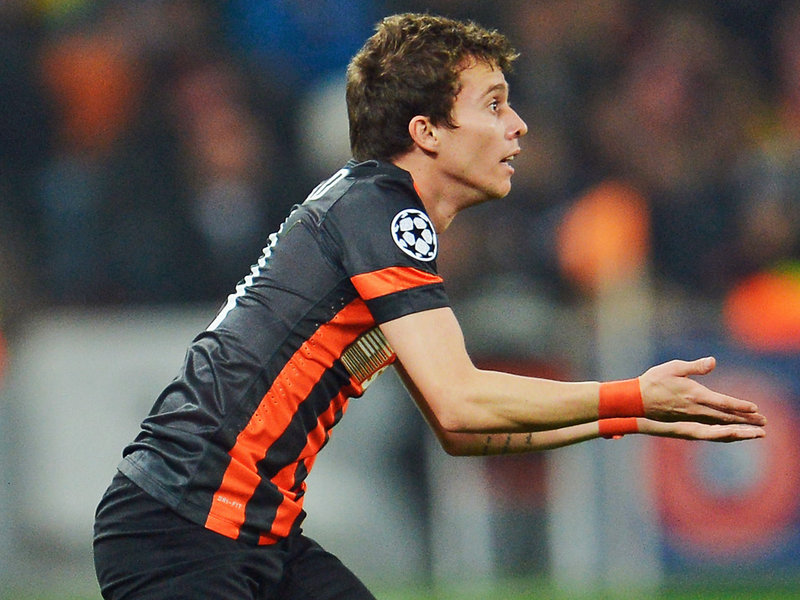 News from the United Kingdom this week suggested that the Liverpool based club Everton FC has given up their pursuit of Dynamo Kyiv’s Ukrainian winger Andriy Yarmolenko, and are instead are looking at Shakhtar Donetsk’s Bernard. In some ways it was not a big surprise that the Brazilian winger was subject to transfer speculations this week, as the Brazilian remains an unfulfilled promise at the Miners (as Shakhtar is often called).

The fact that he was pursued by an English Premier League club surprised most who have followed the development of Bernard since he joined Shakhtar in 2013 when he was purchased for €25 million from the Brazilian team Clube Atlético Mineiro. Aged 20 at the time, Bernard was chased by several big name teams in Europe, including Borussia Dortmund, which was looking to replace the prolific German playmaker Mario Götze, but in the end Dortmund chose Shakhtar’s Henrikh Mkhitaryan, and Shakhtar reinvested the €25 million they received for Mkhitaryan in purchasing Bernard. 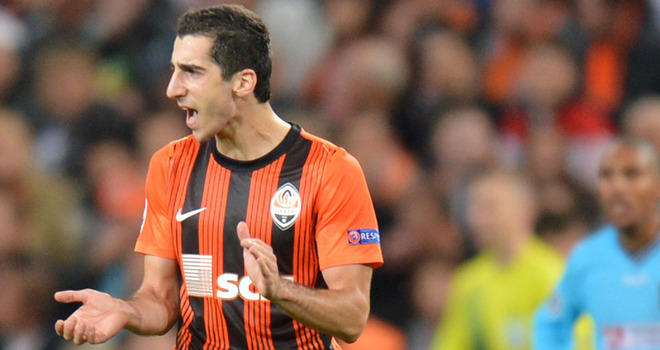 Bernard was brought in to replace Mkhitaryan

The parallels between Mkhitaryan and Bernard do not stop there, as both players have struggled to meet the high expectations that came with their large transfer sums. But while Mkhitaryan now appears to have finally adjusted to the Bundesliga under Dortmund’s new coach Thomas Tuchel, Bernard still struggles to adapt to the game in the Ukrainian Premier League (UPL).

In 2013-14, his first season at Shakhtar, Bernard made 18 appearances, and only managed two goals and seven assists. This was followed by a dismal World Cup showing which ended in a huge disappointment for Bernard especially as he was in the starting line-up for Brazil in what ended up as a historic defeat when Germany dismantled the Brazilian Seleção 7-1 in the semi-final. Overall, Bernard only managed a Whoscored.com score of 6.19 in three matches for Brazil during the World Cup.

Perhaps it was the disappointment of the 2014 World Cup in Brazil that caused Bernard’s form to plummet in the 2014-15 season. He managed only five assists in 14 UPL matches, and his statistics were not much better in the Champions League where he made only two assists in five matches. In fairness it must be mentioned that Bernard did struggle with injuries—a common occurrence for players who participate in summer tournaments such as the World Cup—but when one takes into account the large transfer sum that Shakhtar paid for the Brazilian, Bernard’s performance can only be described as a disappointment, for Bernard’s average Whoscored.com score dropped from 7.07 (when he played in Brazil) in 2013 to 6.55 in 2013-14, and rose only minimally to 6.89 in 2014-15.

This season Shakhtar has seen a small exodus of Brazilian players as defensive midfielder Fernando moved to UC Sampdoria Genoa, striker Luiz Adriano left for AC Milan, and winger Douglas Costa was transferred to Bayern Munich (for €30 million). So far Shakhtar has been quiet on the transfer market, and only has brought back the 32-year-old striker Eduardo da Silva, who had previously played for the club; it was expected that players in the squad, such as Bernard or Alex Teixeira, would step up to replace the departed players.

Bernard – Failing to Step Up

Alex Teixeira has stepped up his game—he scored 17 goals in 22 UPL matches last season—by already scoring five goals in the first five UPL matches this season as well as adding another goal in the Champions League qualifier against Fenerbahçe Istanbul, other players such as the 27-year-old Brazilian right winger Marlos have also stepped up their games. Marlos especially has been a revelation in the Champions League qualifiers so far as he scored two goals over two legs in the UEFA Champions League playoff against Austria’s Rapid Wien. Furthermore, the young Ukrainian starlet Viktor Kovalenko—the 19 year old was part of Shakhtar’s U-19 team that reached the final of the UEFA Youth League—whose recent performances have earned him a call up to the Ukrainian national team, is slowly surpassing Bernard. 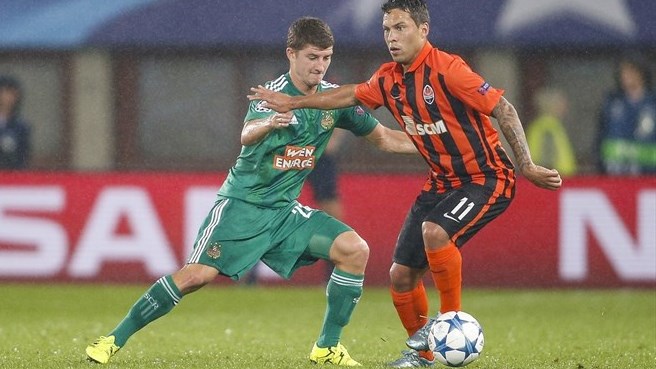 Marlos was outstanding vs. Rapid Wien

Bernard’s failure to live up to his potential suggests that Shakhtar is likely interested in cutting their losses by offloading him. Given his statistics, however, the question remains why Everton, or any team, would be interested paying big money for the Brazilian. Indeed Shakhtar’s CEO Sergei Palkin has released a statement regarding a potential transfer by Bernard to Everton by saying: “I cannot comment on this information. At the moment, I have not heard about a serious interest in Bernard from Everton”.

Bernard was brought on in the 86th minute in both playoff matches against Rapid Wien, and it appears that Shakhtar coach Mircea Lucescu no longer considers the Brazilian a major part of his match plan, especially in do or die matches such as the UEFA Champions League playoffs. This suggests that Bernard is now considered surplus at the Miners.

Despite his poor statistics and the fact that Bernard failed to leave a mark in a league that is considered less competitive then other European competitions, such as the English Premier League, there does seem to be a market for Bernard. Everton are not the only club that has shown interest in purchasing him; according to Tribuna.com the Portuguese club FC Porto would be willing to pay €17 million for Bernard.

Rumours from Portugal have also suggested that Alex Teixeira is also on FC Porto’s radar. Now that Shakhtar has reached the group stage of the Champions League, however, the Miners could look to bring in players rather than selling another top star. But does Bernard fall into that category? Palkin has stated that Everton have not made an offer for Bernard, but, at the same time, he did not issue the typical hands off warning that is common when a club considers a player indispensible. As Bernard is only 22 years old there might be still a strong market for the Brazilian despite the fact that he has failed to impress while playing for Shakhtar. 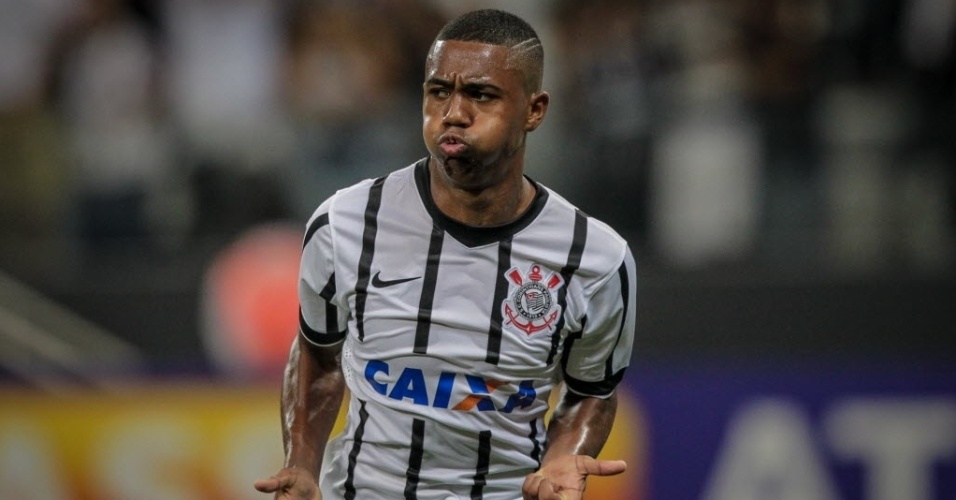 Malcom is potentially on Shakhtar’s radar

Hence, Bernard could be sold in order to free up additional funds for Shakhtar, which would allow the club to make further serious investments in the squad. With qualification to the Champions League wrapped up, the club could sign exciting players such as the young talented Brazilian Malcom, who has been rumoured to be in contact with Shakthar. Lucescu has, in the past, been a mastermind when it comes to putting teams together. Bernard, however, does not seem to be a good fit, and therefore Shakhtar may be willing to cut their losses and sell Bernard. This could be a win-win situation for both Shakhtar, and Bernard, as Shakhtar could use the funds, and Bernard could benefit from a change of scenery.