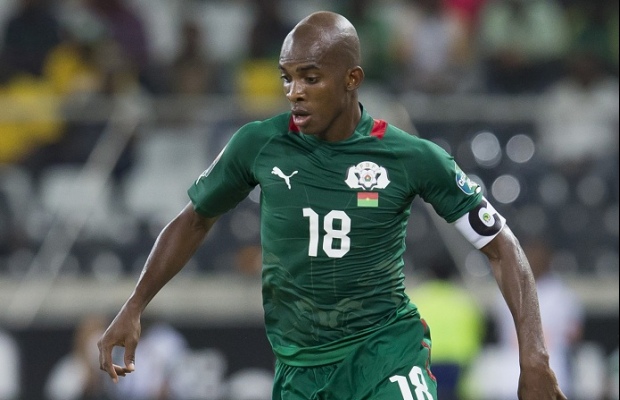 Kuban Krasnodar’s Burkinabé midfielder Charles Kaboré currently is one of the hottest properties on the Russian transfer market, with the Krasnodar based news homepage Kuban24 claiming that several clubs including Spartak Moscow, Lokomotiv Moscow, and Anzhi Makhachkala were interested in bringing in Kaboré.

Kaboré, in turn, stated that he was interested in leaving Kuban Krasnodar, as the club had failed to qualify for the UEFA Europa League. Then on July 17 Kuban24 reported that Kuban Krasnodar’s Burkinabé midfielder Charles Kaboré had agreed to contractual terms with Lokomotiv Moscow.

Kuban general director Evgenii Muravyev, however, has since stated: “We want to keep our key players. We have no plan to part with Kaboré. Lokomotiv has made an offer for Charles. But we were surprised at the [small] amount offered for the player, so we did not even consider accepting the proposal.”

Kaboré has indeed become a hot property since joining Kuban from Olympique Marseille for €2 million in February 2013. Kaboré, who according to Transfermarkt.de is valued €7 million, had an average Whoscored.com score of 7.08 in 26 games last season. Indeed he was one of the few bright spots of Kuban’s season last year, as the club had a miserable year riddled with financial scandals due to uncertainty over the actual ownership of the club. Also, they ultimately failed in their goal to reach the Europa League.

Now the club has brought in former Russian national team players Andrey Arshavin, and Roman Pavlyuchenko. The obvious hope is that Arshavin, and Pavlyuchenko’s experience can help Kuban return to a standing that is within reach of a Europa League spot. Age may be a limiting factor, however, as Arshavin is 34, and Pavlyuchenko is 33, and experts have expressed serious doubts over whether they still have the necessary fitness and motivation to help the club achieve its goals.

These doubts were echoed by Kaboré—who at 27 is at the ideal age for a football player—as he has now expressed his desire to leave the club in order to play for a team that more closely matches his aspirations. But because Kaboré is under contract at Kuban until June 30 2017, the club seems to be in the drivers seat, and technically could force him to stay in Krasnodar.

Now it appears that Kaboré on his part, is following through with an attempt to force a move away from Kuban Krasnodar. In the past Kaboré was represented by the international player agency Kick & Run Sports, but now the well-known agent Dmitry Seluk has taken on the case in order to facilitate a move.

Kaboré did not feature in Kuban’s first match, a game the club lost 2-0 against Ural Yekaterinburg, and Seluk has claimed to Sport-Express that “it is not that Kaboré does not want to play. He is under contract at the club. But, apparently, because of nerves, he had problems with the muscles. Also he has not received his salary even though it was supposed to have arrived on July 15. For me, this situation is amazing, and I think, the acquisition of Arshavin and Pavlyuchenko has caused the club to hold back the salary to other players.” Seluk further added “how can a person [Kaboré] recover as a person who is ill and wants to go see a doctor in France?”

The tactic of citing an undisclosed injury in order to force a transfer is not new: in the summer of 2014 the Turkish midfielder Hakan Çalhanoğlu, for example, cited that psychological pressure made it impossible for him to continue to play for his club Hamburger SV—a problem that faded quickly after Hakan was granted a transfer to Bayer Leverkusen.

It now appears that Kaboré, and his agent Seluk are resorting to similar methods in order to force a transfer for Kaboré away from Kuban Krasnodar, ideally to a club that can not only find a doctor to fix Kaboré’s nerves but can also grant him a higher salary, and playing time in a UEFA competition.