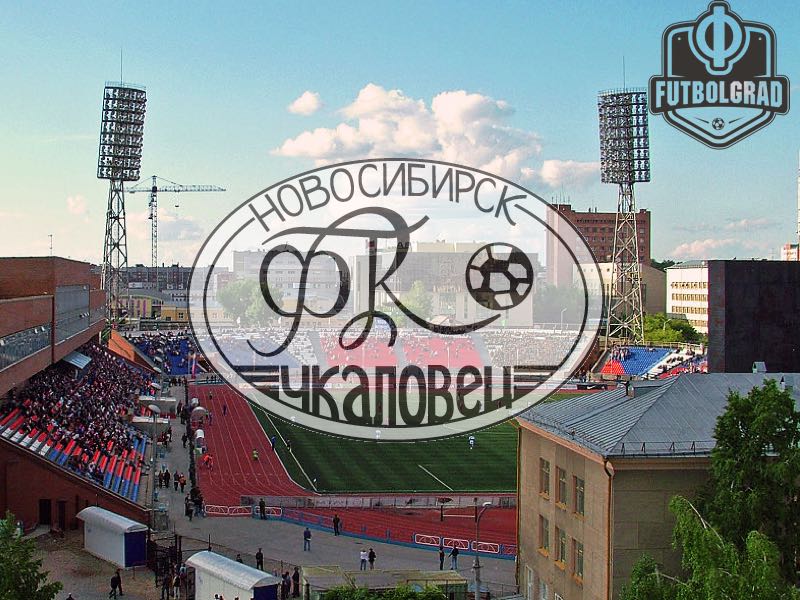 Chkalovets Novosibirsk and the Siberian Derby

I started going to see the local team in Novosibirsk regularly in 1994, and my fondest memory is that of the Siberian Derby. Our local club was called Chkalovets. We have a plane-building factory named after Valery Chkalov, and originally that team was a factory team and later became a professional football club. In the 90s Chkalovets played in the Second League, which is the third tier in Russia. In the Second Division teams were divided by regions (zones).

Chkalovets won our Siberian zone in 1994 season and had to face the winner of the “East” region – Dinamo Yakutsk to go progress to the First league (second tier, modern Football National League). The first game was away, and Dinamo won 2:1, but we got that crucial away goal which was scored by fan favourite Evgeniy Obgolts. 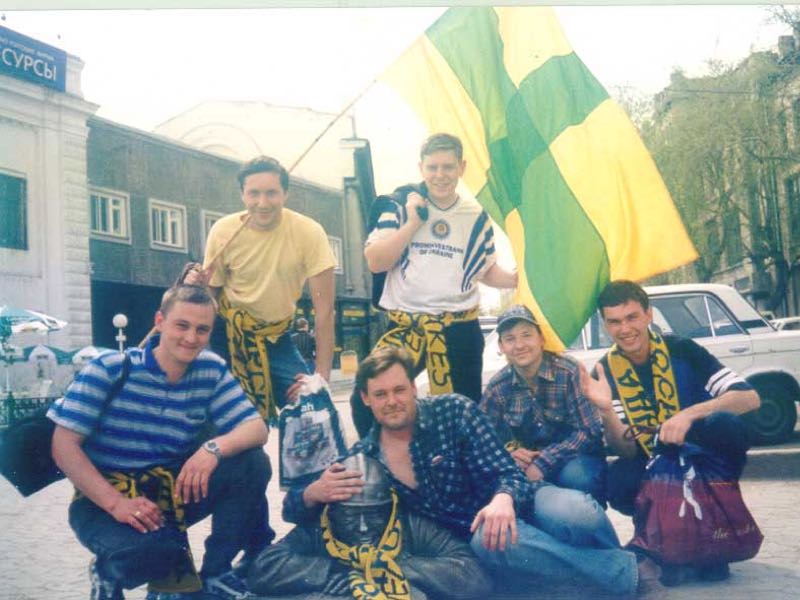 For Novosibirsk fans, the Siberian Derby was always the main event.

One week later my Dad and I went to see a home playoff game. The Spartak stadium was full. It was a pretty big stadium for the Second League, around 12,000 to 13,000 capacity, but people were saying that they crammed 17,000 for that game, because it was an old Soviet style stadium with benches rather than seats.

It was October, pretty cold Siberian fall evening, but it was so exciting regardless. I was nine years old, and this was one of my first experiences watching live football. And it’s was a cup final game. There was a massive tension in the air! I remember going bonkers! Chkalovets won 2:0 and thanks to that away goal we progressed to the First league! So exciting!

There was a pitch invasion after the of the game, I ran on the field and high fived players and hugged them, then I followed one of the players and made it to the team’s dressing room. I was there, watching players embrace, celebrate and drink champagne or most likely it was local ВИНАП beer! Unreal experience for a nine-year-old kid! When I went back to where my Dad and his friends were. I was so excited and yelled: “Dad, I touched Zlobin (one of the players)”. And one of my Dad’s friends was like “so what?“. They have grown up men and didn’t see those players like something special, but those players were godlike to me! I hugged Dmitriy Zlobin and was excited like he was Pele. Apparently after THAT experience, I fell in love with the team!!

Chkalovets Were Promoted to the Football National League in 1995

Chkalovets went on to play in the first division (second tier, modern FNL) in 1995. The season went very well, and I attended all the home matches. And then it was time for the Siberian derby against Zarya Leninsk-Kuznetsky. The First division is not split up into regions/zones, so you have teams all over the country in that division, exactly like it is in FNL right now. Zenit was in that division back then, so Chkalovets would fly for like 4 hours to play in St Petersburg and another 5 hours in the opposite direction to play Luch Vladivostok. But Zarya was only 200km away from Novosibirsk, so it was truly a Siberian derby.

Zarya had an impressive line up back then. Alexey Smertin went on to be a captain of Russian national team and played for Chelsea, Bordeaux, Fulham, Dinamo and Lokomotiv; Sergei Kormiltsev played for Dynamo Kyiv in the Champions League and Ukrainian national team. Back then they were young talented Siberian players who played for Zarya. One of their best players was Sergei Toporov; he was a perfect example of a great local home-grown striker who was good at the lower level but never actually managed to play at the top level. He was a super striker for Zarya and scored 112 goals for the club, but did nothing in the other clubs he played for and pretty much failed everywhere he went except his home club. Because of all that great talent, Zarya played lovely football and papers used to call them “Siberian Spartak”.

Zarya arrived in Novosibirsk to play the Siberian derby against Chkalovers on July 26, 1995. It was the first time in my life when I saw away fans. They brought buses full of people from Leninsk-Kuznetsky and took over one terrace in the stadium – it was unreal to me; remember I was just a little kid madly in love with the local team. Again, a full stadium, people crammed on benches, it was a hot summer day, I do not remember much of the game, but I remember the feeling of excitement. The away fans were right across from me and my Dad, I was watching them and was completely blown away. Remember it’s the 90s in Siberia, there was no fan culture in the modern version. It was just people in that away stand, no colours, no flags, no jerseys, nothing that shows their support to Zarya, but they had a massive drum, and I was amazed that people bring that kind of things to football matches.

Leninsk-Kuznetsky is a small Siberian town; the population is around 100,000 people. This is how Wikipedia describes the city “Leninsk-Kuznetsky is one of the leading coal mining centres of the Kuznetsk Basin. It is entirely turned towards the extraction of coal. Many mines are within the limits of the city”. People who came to support Zarya in Novosibirsk were real Siberian folk, they helped their team and banged that drum like there was no tomorrow—I have blown away, it was an unreal derby experience. That experience still gives me goosebumps today.

Chkalovets vs Zarya was a Real Siberian Derby

When I was writing this article, I looked at the result of the Derby on the internet and vaguely remembered how the game went. At the beginning of the second half, our striker Galkin made it 1:0 and then our captain and club legend Murtaz Nachkebia scored a penalty. He never took penalties, our strikers Krivoshekov, Zlobin or Obgolts usually took penalty kicks, but he took that penalty in that massive derby. And again now I vaguely remember that disappointment when Zarya came back to 2:2 with two Toporov’s goal on 86th and 90th minutes. I remember very well that Zarya fans left the stadium cheering like they won the game because that last minute comeback in that massive derby was like a victory. Chkalovets finished the season 11th, and Zarya was 12th so both clubs stayed in the First Division and it was a great achievement for both clubs.

But after that dramatic season, I had to say, ok maybe Chkalovets is my third or maybe the even second favourite team on that list. They meant so much to me. Unfortunately, that romantic feeling towards the team finished eventually. A big plane provider “Sibir” (now S7) came and bought the team in 2006 and changed the club’s name to “Sibir” (Siberia). The club is called “Sibir” to this day. They are regulars in that Football National League (second tier) now, but the excitement is not there anymore. It felt like Chkalovets feel was gone with the name change, and Sibir was a different club. The feel of a factory team, the people’s team feel evaporated, and the new cold ownership by a massive corporation wasn’t the same. 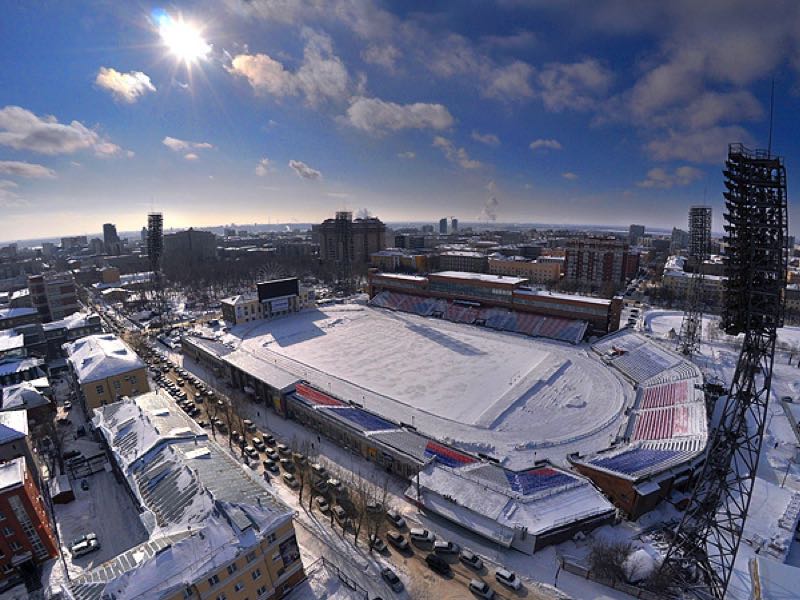 The Spartak Stadium in Novosibirsk.

Not many players from that legendary 1994-1995 squad stayed, people lost interest and attendance dropped to around 5000. Now I see the reports it’s even lower, around 2000-3000 on that same old mostly empty Spartak Stadium. I stopped following them and only went to games when Sibir played Spartak in the Russian cup a couple of times. It was not the same for me, and it wasn’t just me, that obsession with football in the city was gone. Sibir wasn’t the same anymore.

Sibir made it to the top tier in 2010. At that time I moved to Canada already, and maybe that was the reason, but I did not feel any passion for the club playing in the top tier. I thought I would, but I ended up only watching their first home game because I just wanted to see that old Spartak stadium on TV and Sibir’s two games against Spartak. I was surprised that I felt nothing towards my home town club. But it was a different club.

In the 2000s some football fanatics tried to rebuild the original Chkalovets, but it failed due to the lack of finance. But in many ways, Chkalovets and the original Siberian derby live on in my childhood memories.

Tim Bogdachev is a lifelong Spartak Moscow fan, and the host of the weekly punk rock radio show Rocket From Russia on CiTR 101.9 FM in Vancouver, BC, Canada. Follow Tim on Twitter @RussianTim61.