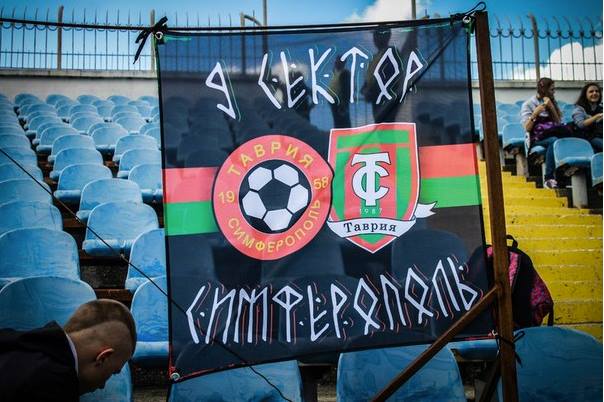 Crimea Developments – The Lonely Voice of the Pro-Ukraine Tavriya Ultras

Following the deadly violence of Euromaidan, coverage of unrest in Ukraine has switched to developments in Crimea, a region that comprises an ethnic and linguistic Russian majority with the area representing almost mythical value to the Russian Federation.

As with other Ultra groups, the fans of Crimea’s biggest club Tavriya Simferopol were involved in Ultra groups’ collective defence of ‘ordinary’ protesters, which took place not only in Kyiv but all across Ukraine. In the previous article “Ukrainian Ultras and the Unorthodox Revolution” attention focused on the involvement of Ukraine’s Ultras scene during the Maidan demonstrations. Like many other groups, the hardcore fans of Tavriya Simferopol were part of the fight against the Yanukovich regime, but what is their role in the current tension, now that the contention is on their proverbial doorstep? In spite of the fact that many ethnic Russians are part of Tavriya’s Ultra groups, it transpires that these particular Ultras are the most outspoken group against the current Russian involvement and potential independence of the peninsula. 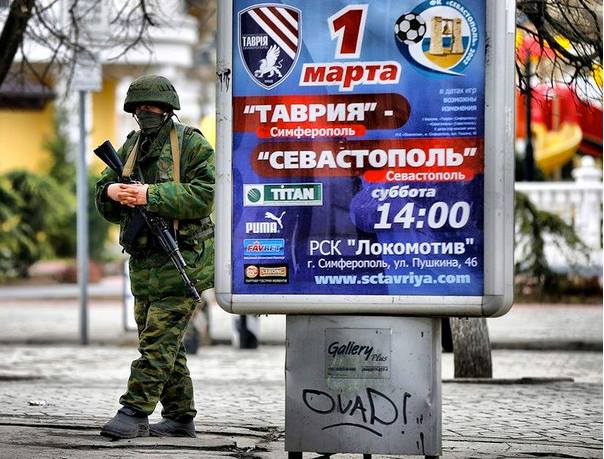 Crimean Derby under the protection of the Self-Defence Force

Tavriya Simferopol were an obscure club during the Soviet Union, bereft success but for winning the Soviet First League (the second tier of the Soviet Union football pyramid) in 1980. However, when Ukraine gained independence in 1992 Tavriya achieved a footballing miracle by winning the first Ukrainian championship. In a makeshift format, Tavriya won a league-deciding play-off against Dinamo Kyiv. Up until this day, Tavriya are the only club to have won the national title outwith Shakhtar Donetsk and Dinamo Kyiv.

Somewhat coincidentally, Tavriya’s championship aligned itself with independent Ukraine’s first political conflict with Russia when Tavriya, as the champions of Ukraine, wanted to travel to Moscow in the winter of 1993 to represent the nation in the newly-created Commonwealth Independent States Championship, a tournament that was particularly popular in the early 1990s and was in many ways a Champions League of the successor states of the Soviet Union. The club, however, were prevented from participating by the Ukrainian authorities due to the fact that Ukraine did not want to ratify the Commonwealth of Independent States Treaty in parliament. Authorities in Kyiv threatened to fine the club if they travelled to Moscow in what they deemed an illegal tournament. At that time, Russian newspapers Izvestiia and Pravda reported that club officials and fans were extremely disappointed by the obstruction, highlighting even then Crimea’s special status to the Russian people. 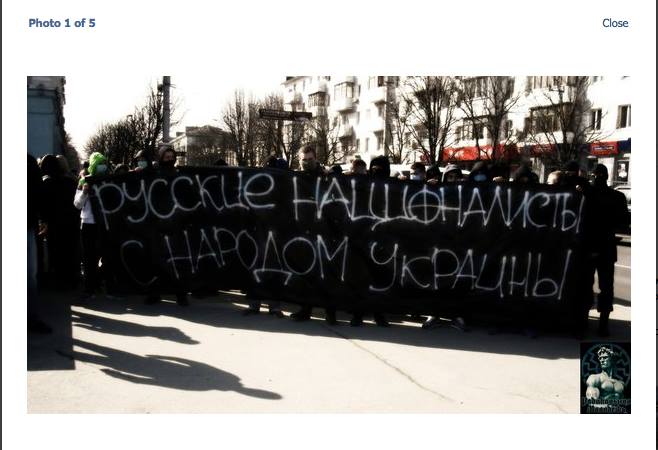 The Boys from Sektor 5 and 9

The two most hardcore Ultra groups of Tavriya Simferopol are known as Sektor 5 and Sektor 9. The names simply indicate the favoured location of the ultras in the 20,000-capacity Lokomotiv Stadium, Tavriya’s home ground.

The involvement of Tavriya Ultras in Euromaidan was fascinating as many broke away from hitherto now club/political loyalties. In the case of Sektor 5 their support against the Yanukovich regime catapulted this particular group away from the mainstream of pro-Russian and pro-Partiia Regionov tendencies, which are prevalent in Crimea.

In this context Tavriya Ultras as a youth group provide a stark contrast to what many in the West has learned about Crimeans in the media. Tavriya Ultras have been strongly outspoken in their support for a unified Ukrainian state. In that regard they follow the line of other Ultra groups in the country, which are for the most part anti-communist, nationalist, and extremely vocal against what they perceive as the horrors of the Soviet Union. It is within this context that Tavriya Ultras can be seen as a bastion against Crimea returning to Russia under Putin.

This development was especially significant in Crimea where up to this day many Crimeans feel a closer allegiance to Moscow than Kyiv. While, during the revolution Tavriya ultras from the Crimean city of Simferopol spoke out against European integration, they nevertheless voiced their displeasure with the violence being perpetrated by the Yanukovich regime against the Maidan protesters.

Despite mutual ground having been briefly found, Ultra groups of different football clubs were not necessarily unified in terms of how the country was supposed to be run after the revolution. The discontent against the Yanukovich regime had many faces and varied from region to region. Protestors lamented corruption, nepotism, pro-Russian sentiment, and in the case of Crimea, a lack of political franchise.

Unlike other oblasts, Crimea has a presidential representative who is directly selected by the President of Ukraine and acts as the governor of the autonomous republic. Young Crimeans, in particular, have felt that this political arrangement has curbed the political freedom of the region, which was a key reasons why Ultra groups from the peninsula joining in with Maidan protesters.

The Two Sektors: an Invisible Mob

But what do the Ultras in Crimea want and why does this group matter? The answer is straightforward: Ultra groups are in essence youth groups who use the club they support to carry forward their political agendas. In a way, the Ultras are a representative sample of young (mostly males) Crimeans and their perspective on recent events.

Tavriya and FK Sevastopol Ultras have, however, been mostly invisible throughout recent events which have shaken Simferopol and Sevastopol. Aleksandr Tkach from the Russian language sport portal Tribuna, has stated that it is very unclear as to whom the Ultras are supporting as events unfold. Research on the Russian social network vkontakte (also known as Russian Facebook) found that on both Ultra groups’ pages, however, the majority of Ultras appear to want Crimea to remain a part of Ukraine. 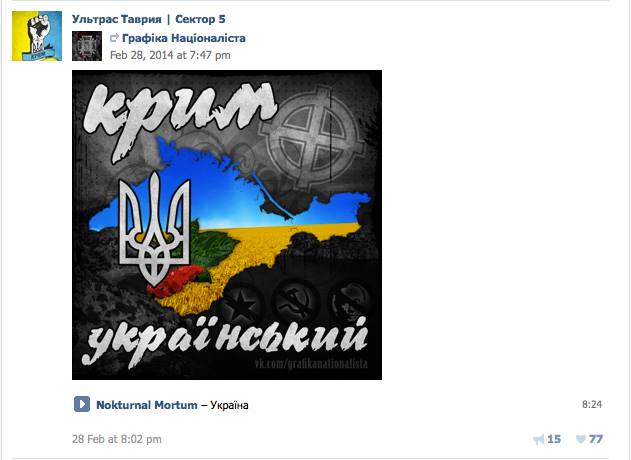 Since the demonstrations, some Ultra organisations have faced aggressive police harassment, threats and arrests, which have restricted their potential for further support. This includes the boys from Sektor 5 and 9 whose support for the Euromaidan protests has not gone unnoticed by the mob that stormed the Crimean parliament. As early as January 29, leaflets were distributed in Simferopol with ‘wanted’ pictures of some of the most prominent Tavriya Ultras.

While Ultras involvement in the region has been minimal, a visit to the Tavriya vkontakte page offers some indication on how Ultras feel about the current events taking place on the peninsula.

Videos and postings on Tavriya’s Ultra group Sektor 5 page as well as on Sektor 9’s suggest that a surprisingly high number of these Ultras continue to support the course of the coalition government and are against the current vociferous calls for independence in the peninsula. One video for example shows a group of ultras marching towards the Verkhovna Rada in Simferopol shouting “Slava Ukraina“, swimming against a ferocious tide of pro-Russian support. 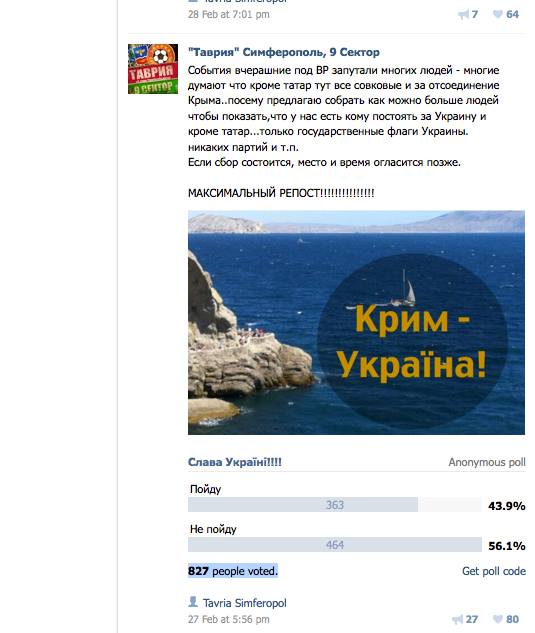 The Crimea is Ukrainian! Tavriya Fans holding their very own plesbicite

Another post shows a picture of a pro-Ukrainian Tatar and a pro-Russian Crimean squaring off against one another, two giants who represent Russia and Ukraine urge on both figures.

Above the picture, the Ultras have posted a statement in which they urge both Ukrainians and fellow Russian speakers to remain calm, and to find common ground. “Today we either agree. Or our enemies will arrange another massacre.” The statement continues to warn of a potential conflict between Russians and Ukrainians.

Although the text urges both Ukrainian speakers and Russian speakers to demonstrate unity, there is also a sinister tone taken against the Tatars who have demonstrated against the secession of Crimea from Ukraine. The text read: “We have made our choice in favour of the unity of the white peoples of Ukraine. Tomorrow will most likely see slaughter between Tatars and pro-Russian agitators in Simferopol. I beg you not to get involved fellow Ukrainians, Russians I ask the same of you. We are united. Glory to Ukraine! Glory to the present Russia! Death to the enemies!”

Perhaps one picture posted on the vkontakte page of Sektor 5 demonstrates the current sentiment of the Tavriya Ultras. A group of young masked men hold up a black banner on which the following is written: Russkie natsionalisty s narodom ukrainy (Russian nationalists are with Ukraine). These young men stand for the status quo, a Ukrainian state with close ties to Russia, but at the same time without a corrupt government. 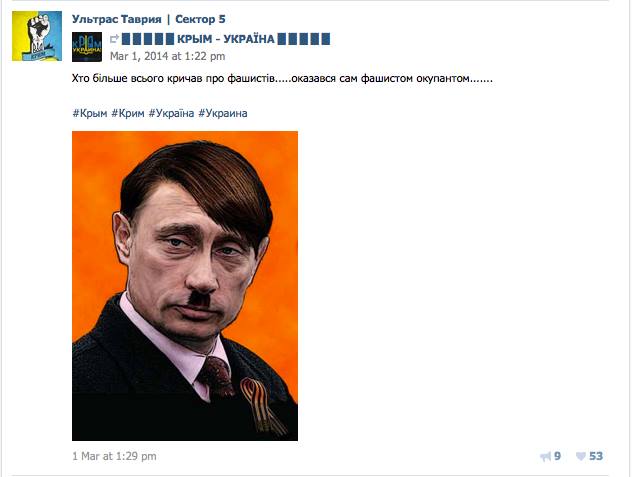 Outspoken Ultras against the annexation of the Crimea by Russia can be observed from pictures posted on Sektor 5’s vkontakte page as members have responded to the threat of Russian invasion with anti-Putin pictures including one, which disfigures Putin to look like Adolf Hitler. The usage of fascist symbols is especially interesting when observing Ultra groups in Ukrainian football as such symbols are easily interchangeable to both represent the enemy but also to promote one’s supposed Ukrainian or Slavic superiority over other ethnic groups such as the Tatars.

At the same time, a Ukrainian expert on twitter known as @RealAndrij also suggests that some, especially the younger members, want European integration, although this orientation is currently in the minority. Yet this implies that the divide on the future of the country is not only visible within the different Ultra groups but also within the most hardcore fans of the biggest Ukrainian clubs. Ultras are active youth groups and their actions can often highlight the activities and actions of an entire generation. The Tavriya Ultras from Sektor 5 are therefore highly significant as they might be the only active youth group in Crimean peninsula that actively speaks out against a return of the Crimea to Russia. At the same time, however, the fact that these Ultras have been forced underground, confined to using social media, suggests that this last line of resistance has slowly disappeared, which presents an ominous development for all those who hope that Crimea remains part of Ukraine.