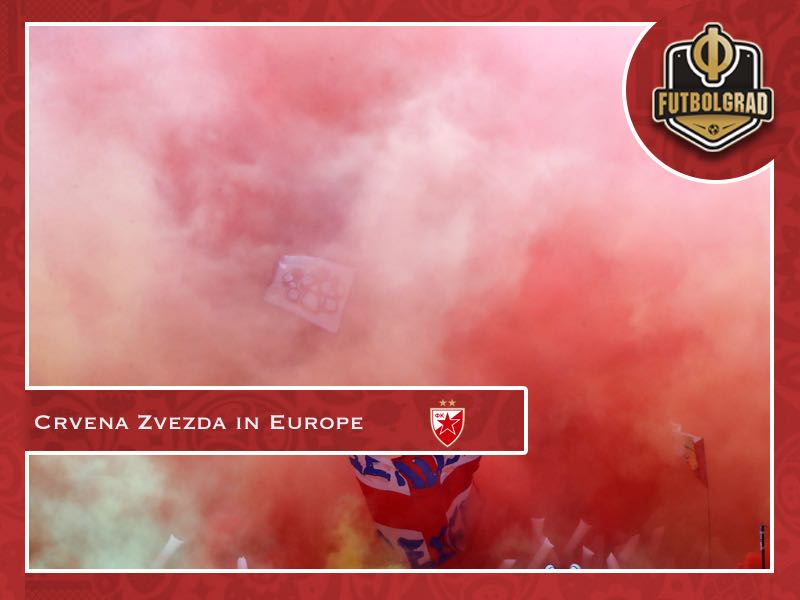 The story of Crvena Zvezda Belgrade’s season so far has been a conflicting and very polarising one. Despite losing a number of their best players over the summer, Zvezda have recruited well.

Tricky Brazilian Jonathan Cafu is just the latest addition to the Serbs’ attacking line. On the pitch, Zvezda have been impeccable. Unbeaten domestically, Red Star are also in the UEFA Champions League playoffs. An extra-time Nermanja Radonjić strike, away from home, was enough to eliminate Slovakian opposition Spartak Trnava.

Radonjić specifically has been in fine form from the outset this season and has a number of potential suitors across Europe battling for his signature, most notably Marseille and VfB Stuttgart. However, thankfully for Crvena Zvezda, if the transfer does go ahead, it seems a deal will be struck after the playoffs, and for a considerable fee, rumoured to be around the €10 million mark.

Away from the field, Zvezda’s rocky relationship with European football’s governing body has however continued. Following their 3-0 victory over FK Suduva of Lithuania, UEFA’s control, ethics and disciplinary body (CEDB) opened disciplinary proceedings against Crvena Zvezda for blocking “stairways” in the ground and, more significantly, “racist behaviour”. The incident in question involved chanting that paid homage to former Chetnik, Dragoljub Mihailović and Bosnian Serb General, Ratko Mladić, two of the most infamous and polarising characters in recent Balkan history.

This is not the first occasion that provocative chanting has seen Red Star Belgrade be brought to the attention of UEFA. During last season’s Europa League knockout stages, Zvezda nearly found themselves having to play their home fixture against CSKA Moscow, a seismic game for the club, behind closed doors.

Whilst UEFA chose to grant the Serbs a stay of execution on this occasion, opting to suspend the decision and issuing a stern final warning alongside a fine, no such decorum and restraint has been shown in their approach this time around. As enforced by UEFA, Crvena Zvezda will play their next two home games behind closed doors and have been issued with a €72,000 fine for their troubles.

Without casting judgment on the appropriateness of the chanting and focusing on the consequences of the supporter’s actions, UEFA’s decision is a tough pill to swallow for the team. Zvezda will now be without their infamously hostile atmosphere during the most important match of their season.

Furthermore, the club are set to lose a huge amount of potential revenue from the two matches in question. Champions League and Europa League games hosted at the Marakana are incredibly popular and will almost always be sell-out fixtures. It is estimated that the club will lose over €1 million because of the lack of ticket sales.

For officials at the club, their current predicament is a sticky one. Whilst being fined that much money is incredibly detrimental to Crvena Zvezda, a club that has had notable financial problems in the past, censoring their hardcore support is not a viable option. Red Star Belgrade’s supporter group, Delije, play a huge role in helping to run and finance the club. Without their continued support, the club would lose their heartbeat, socially and financially.

A move to work with UEFA would be simply awful for the image of club officials. Furthermore, many within the club are reluctant to censor their own supporters, whom they share not only similar political sentiments but also anti-UEFA sentiments. There has been a general feeling of victimisation around the club because of UEFA’s actions over the past decade. This in itself was reflected in the rather subdued response from Red Star towards the latest UEFA punishment, reluctant to come out and apologise for their supporters, nor endorse UEFA’s decision.

Serbian frustrations with UEFA extend themselves from club football to international football. UEFA’s decision to recognise the Kosovan national team was deeply unpopular within the country. Furthermore, the handling of the “Greater Albania” drone fiasco in Belgrade, which ended Serbia’s EURO 2016 qualification chances, received strong criticism from Belgrade. Generally, there is a level of resentment for UEFA present in Serbia that isn’t matched in many other countries. Outside of the Marakana, messages in a bold font state that “UEFA supports terrorism”. The same message was displayed by Delije during Zvezda’s friendly with sister club Olympiacos.

In recent years, the critiquing of UEFA’s actions has evolved into a trend of sorts, across Europe. The term “UEFA Mafia” has become popularised amongst discontented supporters of clubs who have had negative encounters with UEFA, like Red Star Belgrade. Legia Warsaw are another side whose fans have felt considerably hard done by because of UEFA’s actions. Legia and UEFA’s relationship has been rocky, to say the least. Fans were appalled after they were dismissed from the 2014 champions league qualifiers for fielding an illegible player, despite beating Celtic 6-1. Only a few seasons on, a graphic tifo that highlighted Nazi atrocities towards Polish civilians on the anniversary of the Warsaw Uprising, saw Legia receive a €36,000 fine. 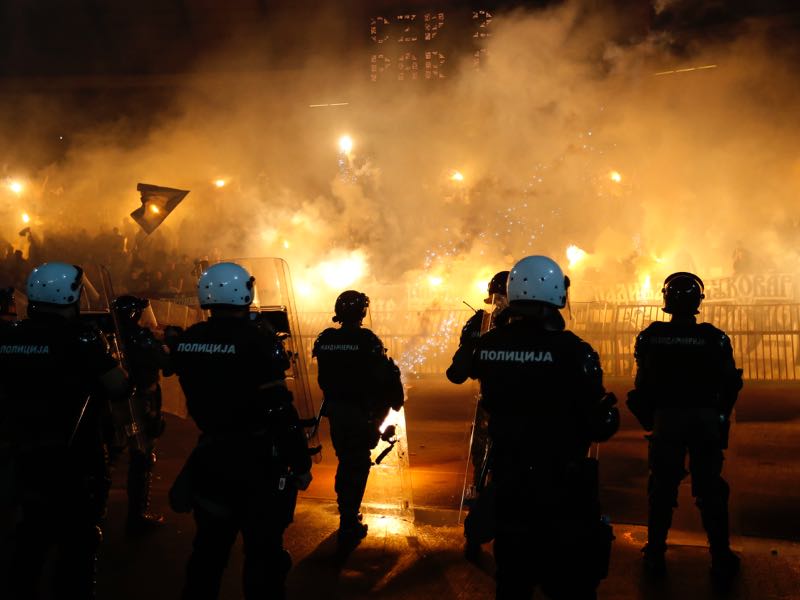 This, in turn, prompted another tifo to be displayed, which likened UEFA to “greedy pigs”. From Malmö to Manchester, many supporters across Europe are now more than ever showing their discontent towards the actions of UEFA, and towards the apparent sanitisation of European Football. Many are against the footballing climate the UEFA has overseen as of late, a climate that has fostered the need for a cleaner, more family-friendly game, without the grit and certainly not “rough around the edges”.

For supporters of Crvena Zvezda, a club that as recently as 2013 almost drowned in a mountain of debt, witnessing a small number of elite and wealthy European clubs consolidate their power and generate billions in revenue, under UEFA’s supervision, is a hard task. Combined with the numerous other factors that accompany European football’s current climate that have affected Zvezda in particular, you may understand why there is such an anti-UEFA sentiment around the club.

Next up in the Champions League, Red Star Belgrade meet Red Bull Salzburg, two teams that despite sounding very similar, couldn’t be more different. Beating the Austrians would not only be a resounding victory for Red Star Belgrade in a competitive sense, but it would also be a moral triumph over a team that, because of its origins and ownership, is almost universally disliked. For the home leg, however, whether Red Star will be the same team without 40,000 screaming Serbs in their corner, remains to be seen.