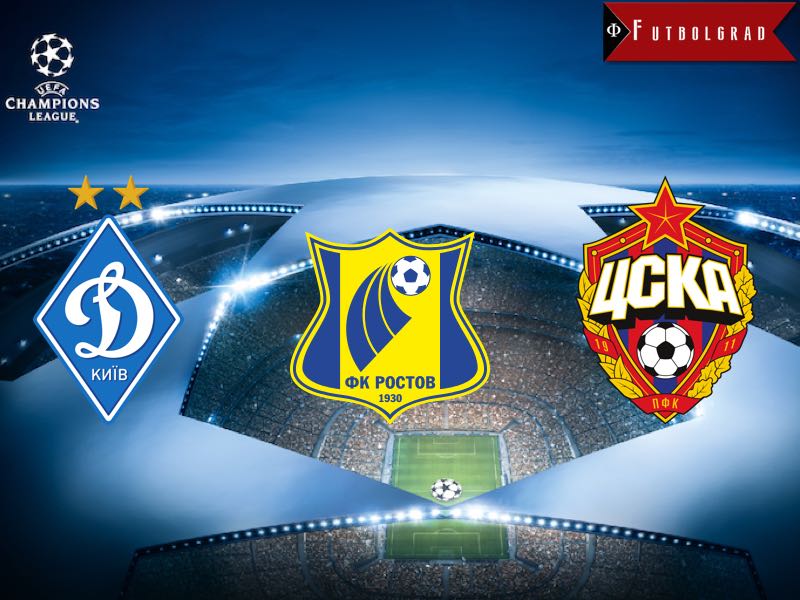 There are two Russian teams and one Ukrainian team in the 2016-17 UEFA Champions League, each hoping to push through the group stage and make it into the knockout round. All three teams have difficult groups to navigate. Here are our Champions League predictions for the three clubs.

Dynamo Kyiv (+2200 to win the group) are in Group B alongside Portugal’s Benfica, Italy’s Napoli, and Turkey’s Besiktas, and bookmakers price them as the fourth favourites to win the group.

Napoli are top of the table after two games thanks to winning both of their fixtures, and they look set to justify their -400 odds of winning Group B.

Besiktas are second in the table (+1000 to win the group), with Kyiv and Benfica (+550)  in third and fourth place, both with one point; Kyiv is in third place on goal difference.

Serhiy Rebrov’s team lost 2-1 at home to Napoli despite taking the lead in the game, but their task was proved too difficult when Serhii Sydorchuk was sent off for a second yellow card on 68 minutes.

Kyiv then held Besiktas to a 1-1 draw in Turkey to get their first point on the board.

Serhiy #REBROV : “The game against Benfica is in three days… We must go through this failure and move on” https://t.co/fDuUXZHWwr pic.twitter.com/QyNjDJY8RA

Napoli look like running away with the group, but the other spots are wide open. While it is unlikely Kyiv will win Group B, nobody is going to relish traveling to the NSC Olimpiyskiy, especially in the winter months. It’s a fortress to say the least and Kyiv will advance as far as their home form takes them.

We reckon you should bet on Kyiv to get results at home against Benfica and Besiktas and hope to win a share of the spoils away at Benfica.

Out of the three profiled teams, Kyiv, in are opinion, are the most likely to reach the knockout stages of the UEFA Champions League.

Rostov were swept aside 5-0 away at Bayern Munich but earned a valuable point in the 2-2 draw at home to PSV.

Next up for Rostov is a home tie against Atletico Madrid. It is a game Rostov would absolutely love to get a point from, a result that isn’t out of the question. Rostov are disciplined, well organised and stout defensively, which bodes well against a team that doesn’t score a lot of goals. Atletico, on the other hand, rarely concedes.

Munich will be favored to win on their travels to Rostov on October 19, but the Russian team are more than capable of holding their own. They’ll look to keep it close against the German juggernauts and do their utmost to get a result in their following fixture away to Eindhoven.

While they are likely to give a good account of themselves, we think advancing to the knockout stage will prove too difficult for Rostov.

Reaching the group stage of Europe’s premier club competition was a massive achievement, though, and Rostov supporters will take great solace knowing they beat Anderlecht and Ajax to qualify for the Champions League.

CSKA Moscow (+1200 to win the group) are also involved in a very difficult group. Then again,you’ll be hard-pressed to name a Champions League group that isn’t difficult. Group E is the home to Bayer Leverkusen (+275), Tottenham Hotspur (+135), and AS Monaco (+175).

CSKA side have one point from two games, coming courtesy of a 2-2 away draw at Leverkusen. They lost agonisingly 1-0 at home to Tottenham, a match that could have gone either way.

Like both Rostov and Dynamo Kyiv, CSKA need to claim points at home, particularly as the inclement weather worsens as the weeks progress, which plays right into CSKA hands.

We can see Moscow beating Monaco on October 18, while holding Leverkusen to a draw at home on November 22. The away ties at Monaco and Tottenham will decide whether CSKA can knick third place and qualify for the Europa League.

We think the bookmakers have this one correct, though, as Tottenham will most likely top the group. Monaco should finish in second place and with a little luck, CSKA Moscow may be able to pip Leverkusen for third, thereby qualifying for the Europa League, a tournament the Russian team has every chance of winning.