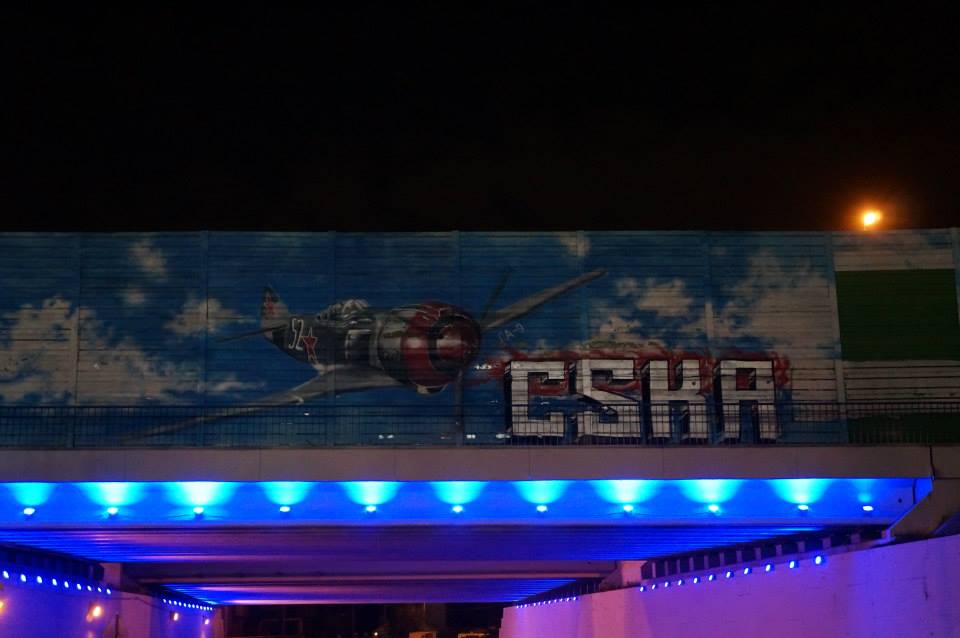 CSKA Moscow – Red Army in Exile at the Khimki Arena

CSKA Moscow is one of the most storied clubs in Russian football. The club was originally founded in 1911 as part of the sports association OLLS (Obshchestvo Liubitelei Lyzhnogo Sporta), which, before the revolution, was a Tsarist army officers’ club. The club is, therefore, one of very few football clubs in Russia that can pre-date its history to before the 1917 communist revolution. In 1924 the club was renamed OPPV (Opytno-Pokazatel’naia Ploshchadka Vseobucha) and came under the control of the military organization Vsevobuch.

In 1928 the club was again renamed, this time CDKA (Tsentral’nogo Doma Krasnoi Armii), and ownership was transferred to the Red Army ( today called the Ministry of Defence). The Red Army team went through several name changes up to 1960 when it received its present name CSKA (Tsentral’nyi Sportivnyi Klub Armii). 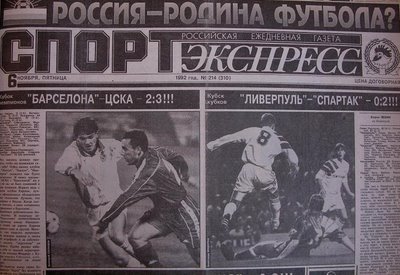 The headlines after CSKA’s surprise win after FC Barcelona.

During the time of the Soviet Union, the club was usually in the shadow of its two Moscow rivals Dinamo Moscow and Spartak Moscow. The club won seven Soviet Vysshaia Liga championships, of which five were won in the 1940s, and early 1950s. The club also added another title in 1970, and was the last champion of the Soviet Union in 1991—and was therefore allowed to participate in the 1992/93 inaugural Champions League. The club managed to qualify for the group phase by knocking out the defending champion FC Barcelona. It was not, however, allowed to compete in Moscow because no stadium in Russia was judged to be playable during the severe winter of that year.

CSKA’s 1992/93 Champions League adventure is well documented in Futbolgrad’s The Soldier’s Tango – A Homage to CSKA Moscow in Catalonia article. Back in 1993 CSKA was unable to play its Champions League group stage games in Moscow. Today, 22 years later, CSKA Moscow is still without a permanent home in Moscow. Instead the former Red Army team plays most of its home games in the Moscow suburb of Khimki. 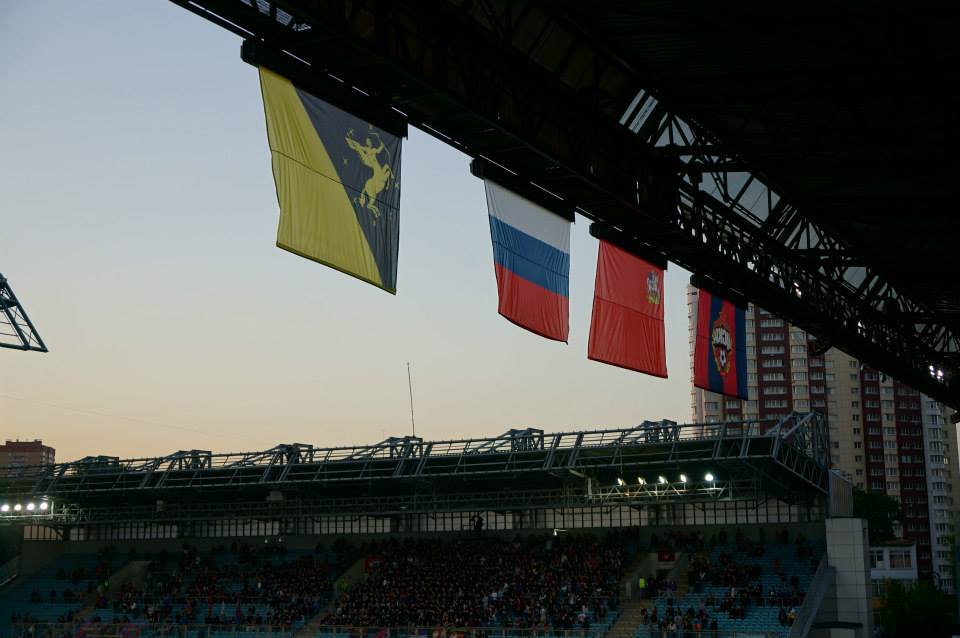 CSKA Moscow at the Khimki. The yellow and black represent the colours of the city of Khimki.

Built in 2005, the Khimki was supposed to become a modest home for the local club FC Khimki, but the plans grew more ambitious, and in the end the Khimki Arena was developed into a beautiful modern stadium that with 18,636 seats was capable of hosting not only Russian Premier League games but was also cleared by UEFA to host Champions League, and Europa League matches. 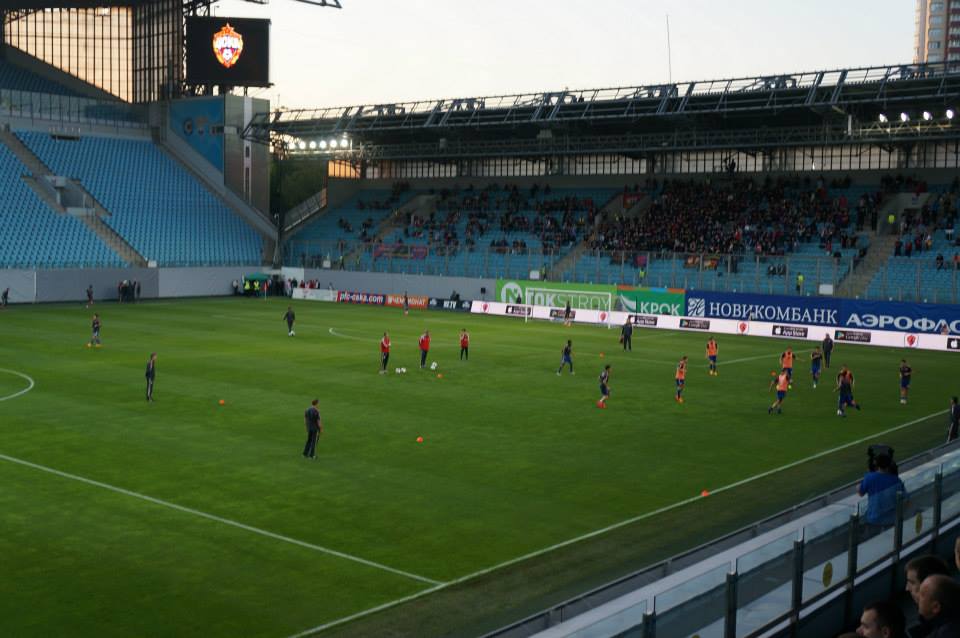 Both teams are getting ready for the action.

The arena was officially opened on September 20 2008 with a match between the local clubs FC Khimki and FC Saturn. While both clubs have since gone bankrupt, clubs from central Moscow have started to use the arena. Soon after, for example, Dynamo Moscow started renting the arena because it was a better facility than the Central Dinamo Stadium, which had fallen into disrepair after the fall of the Soviet Union.

In 2010, CSKA Moscow also decided to play most of its home matches at the Arena Khimki while its planned new stadium is under construction—Dinamo had in the meantime presented plans to build a new stadium of its own which is currently being rebuilt. While both clubs are awaiting the completion of their stadium construction projects the Khimki Arena has become the home ground of two of Moscow’s most storied clubs. 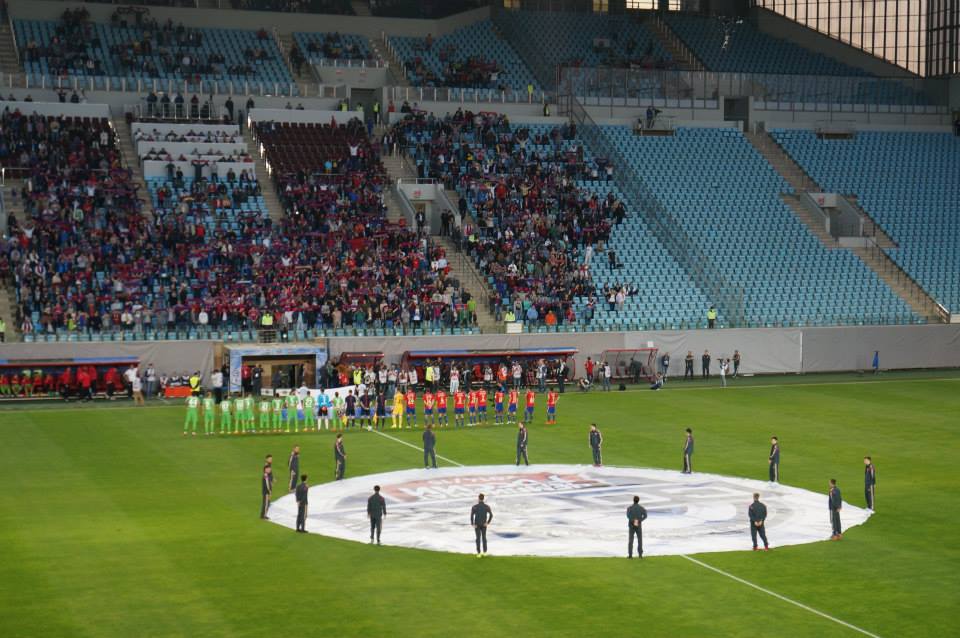 During my travels to Moscow in late May 2015, I was able to attend CSKA’s last home match of the 2014/15 season, which took place at the Khimki Arena. Members of the CSKA Against Racism organization accompanied me to the outskirts of Moscow to see CSKA Moscow take on Rubin Kazan in a match that proved to be crucial for CSKA’s attempt to once again qualify for the UEFA Champions League.

Despite its small size, the Arena is a beautiful classic football stadium with four main stands that surround the field. The lack of a running track means that the spectators are fairly close to the action on the field.

Recently, CSKA Moscow was punished for incidents involving racist chants and fights instigated by their fans. The club was subsequently punished by UEFA during the Champions League group stage: the club received a 2-match stadium ban by UEFA and fans also were not allowed to travel to away games for the rest of the Champions League group stage. This was not the first time CSKA had been punished by UEFA as they had already received a stadium ban during the 2013-14 season. This meant that the club had to play all of its home games in an empty stadium—which was an enormous lose of revenue. 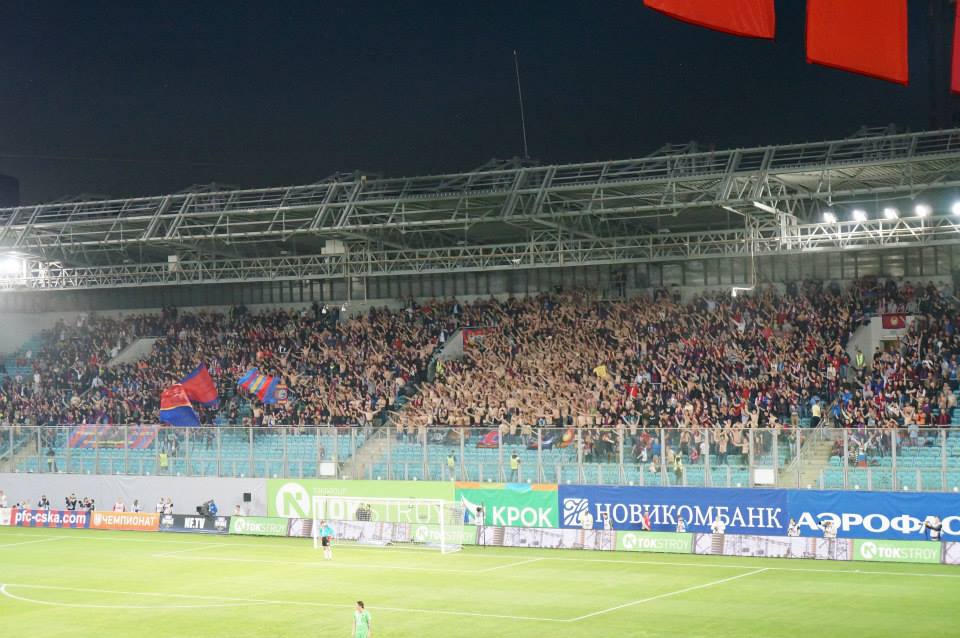 While I watched the match at the Khimki, it appeared to me that the CSKA fans have got the message: the atmosphere was peaceful and festive, there were no fascist symbols, and the fans did not sing controversial songs. As Vladimir (name changed) from CSKA Fans Against Racism explained to me: “there have not been any problems since UEFA punished the club this season.” 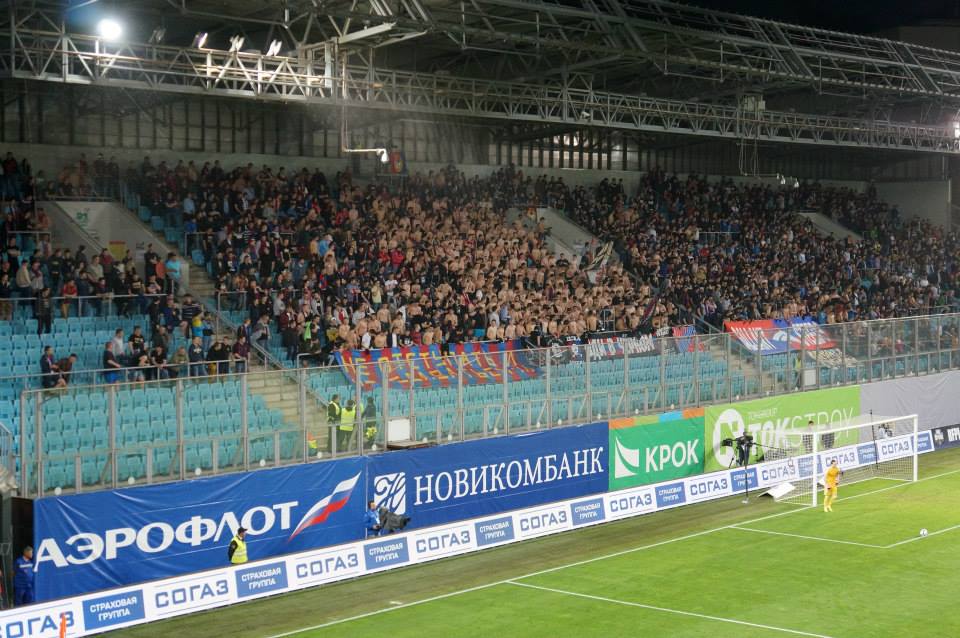 The CSKA fanati have been punished in the past for their violent conduct. This time, however, everything stayed peaceful.

In the end CSKA Moscow won the match 3-0 after two goals from CSKA’s creative Serbian midfielder Zoran Tošić, and a goal by the Finnish national team player Roman Eremenko. While CSKA Moscow failed to defend their Russian title, the win ensured that the club would once again participate in the UEFA Champions League in the 2015/16 season. As a result, the atmosphere on the way back to downtown Moscow was joyful with many fans celebrating the victory on the bus and metro ride home.

The Khimki Arena is designed as a classical stadium with four grand stands.