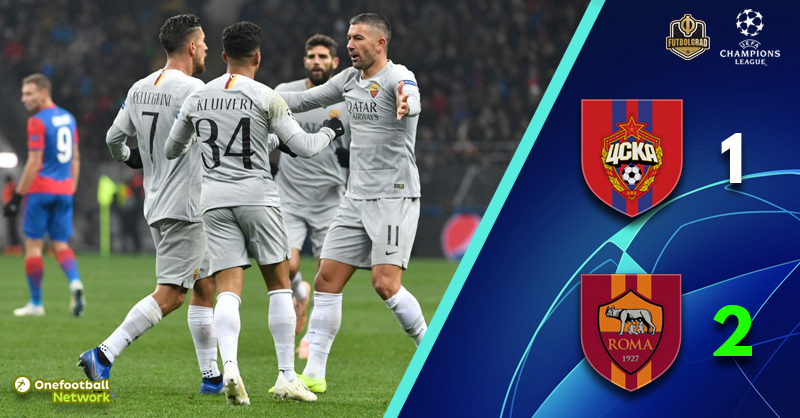 Staged at the Luzhniki CSKA Moscow v Roma had all the ingredients for a fantastic match and while it was a gritty affair a red card to Hördur Magnusson effectively killed it off in the 57′ minute as Roma walk away with the three points.

It took Roma just a few moments to silence the heated atmosphere at the Luzhniki. In the 5′ minute Lorenzo Pellegrini brought in a corner from the left, CSKA keeper Igor Akinfeev misjudged the ball allowing Kostas Manolas to score an easy header. Two minutes later CSKA should have been level Fedor Chalov missing the target from just two yards out.

Then in the 9′ minute, everyone at the Luzhniki held their breath. Mario Fernandes went into a challenge against Aleksandar Kolarov and was hit hard at the back of the neck and had to be carried off the field. With Mario Fernandes, CSKA lost their best player adding to the overall poor start by the Red Army team.

It took CSKA until the 26′ minute for CSKA produce their next chance. Jaka Bijol’s header from just four yards, after a corner, was not placed enough, however, and went straight into the arms of Roma keeper Robin Olsen. On the other side, Alessandro Florenzi had a sitter in the 29′ minute, the forward found himself one-v-one against Akinfeev after a great pass by Dzeko, but ended up stumbling over the ball and the chance was gone.

In the 40′ minute, CSKA should have had the equaliser. Ivan Oblyakov tanked his way into the box and his shot was blocked at the last moment, the rebound bounced straight to Shchennikov, but his header missed the empty net with the ball flying just over the crossbar.

CSKA were more efficient to start the second half. In the 50′ minute, Ilzat Akhmetov played a difficult ball inside the box where Arnór Sigurdsson had to do well to stop the ball under pressure and then place the shot to beat Roma keeper Olsen to make it 1-1.

The Muscovites were back in it. But then received a major blow in the 57′ minute when Hördur Magnusson took down Justin Kluivert outside the box. The defender had already been booked and referee Cakir Cuneyt had no choice to send the Icelandic defender off.

From here it went to bad to worse quickly. In the 59′ minute Lorenzo Pellegrini received a great pass inside the box from Bryan Cristante and had no problem to place a shot past Akinfeev from a short distance. Replays would later highlight that Pellegrini may have been a touch offside but without VAR in European competitions, this one was impossible to spot for the Turkish referee.

A man down and a goal behind it was a tough road back for CSKA. Nonetheless, CSKA had some chances. In the 70′ minute, Fedor Chalov found himself with room at the edge of the box but his shot was not placed enough to beat Olsen and in the 78′ minute it was Oblyakov, who failed to beat the keeper, after finding himself with space in the box.

The last ten minutes provided little action as Roma cycled the ball and with CSKA a man down there was little the Russians could accomplish at the end.

Lorenzo Pellegrini was the man of the match. The Roma attacking midfielder was involved in both goals, assisting on the first and scoring the second. 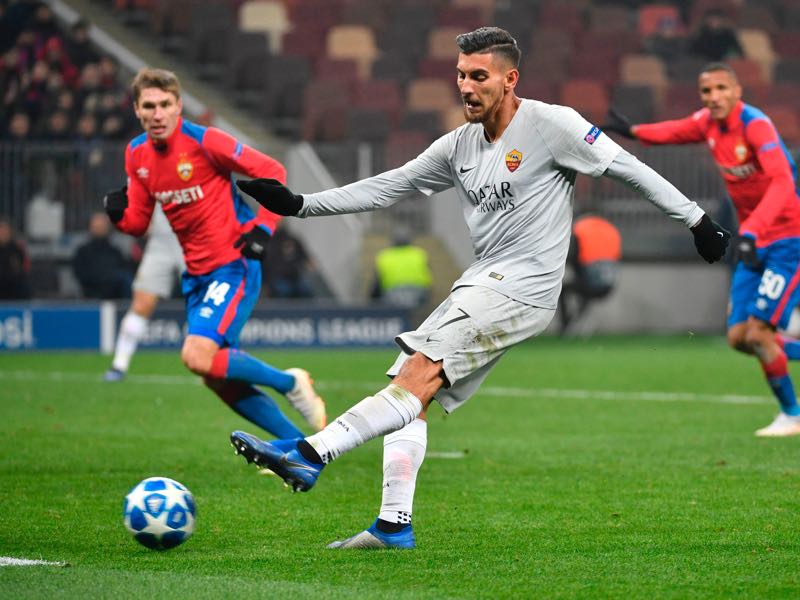 That result all but eliminates CSKA Moscow from the Champions League should Real Madrid beat Viktoria Plzen later this evening. A Real victory would put CSKA five points out of the top two with just two games to go, an almost impossible mountain to climb given that the Koni will still have to play away at Real.