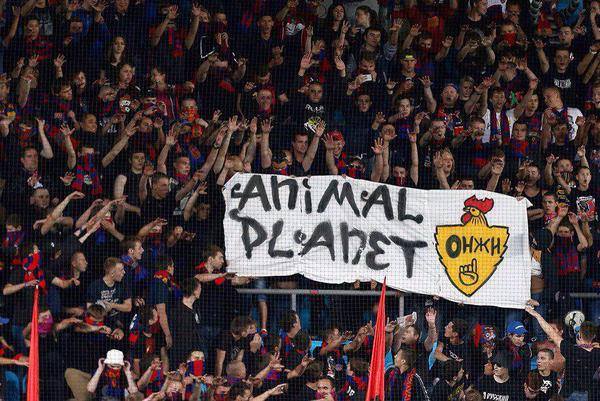 It has been a while since the last unsavory crowd incident involving CSKA Moscow fans, but this weekend the use of derogatory slang returned with a vengeance. At the home Premier League match against Anzhi Makhachkala, CSKA Fans chanted the following at their opponents:

Kill the hachi! [disrespectful term for people from the Caucasus, where Makhachkala is located]

They also produced a banner: http://twitter.com/TokeTheilade/status/627570890897801216/photo/1 [The word in Russian is a distortion of the word ‘Anzhi’ which mocks the way people in the Caucasus pronounce it]

Where are your whores? (described by someone at the game as having been repeated many times throughout the match)

A small number of CSKA fans (including those with children) left the match during the second half, fed up with the chanting on both sides. Many have had enough, like @PranzhuG who tweeted, “As a CSKA fan I am personally ashamed of yesterday’s b***ocks in the stands”.

After having worked hard to prevent such incidents at CSKA Moscow matches—and rightly proud that there had been no recent trouble—CSKA Against Racism are devastated. Their full response in English can be read here: http://twitter.com/WeAreCSKA11/status/627598199679754240/photo/1

In addition to the incidents themselves, they are also battling selective reporting that paints just a fraction of the picture. The few reports of the incident that have appeared in the Western media so far, focus on the CSKA chanting, and ignore, for example, the offensive Anzhi chant directed at Russian women. CSKA Against Racism described one such article as lazy journalism that treats Western audiences like Pavlov’s Dog (capable only of a conditioned rather than an intelligent response).

Anzhi have responded through an open letter to Minister of Sport Vitaliy Mutko, soon to also become Russian Football Union president. In it, the club complains of “unprintable xenophobic chanting that degrades the dignity of Russian citizens and contains direct incitements to kill people because of their ethnic background”. The letter goes on to criticize the match inspector for not reporting the chanting, and asks the authorities to take action beyond fining clubs, noting that “normal football fans throughout Russia are also appalled by the behaviour of the nationalist-fanatics”.

Mutko has recently talked tough about dealing with discriminatory/racist fan behaviour, but incidents like this test what that means exactly. If nothing else, the authorities should be spurred into action by the fact that this behavior will probably be repeated in the coming months. Anzhi fixtures against the Moscow clubs have in recent seasons become a focus of violence as well as discriminatory chanting. With at least three more visits to Moscow expected—and increased antagonism in the city between some ethnic Russians and Caucasians—there is the danger that negative behavior at future matches will escalate if nothing is done about non-violent but extremely unpleasant incidents such as this one.

Meanwhile CSKA’s General Director Roman Babaev has pointed out another incident could very well mean that the club could be excluded from the UEFA Champions League by UEFA. Speaking to Sport-Express before CSKA’s match against Sparta Prague, Babaev stated “it is not necessary to remind us once again. We have a suspended sentence, which continues to operate. It is very serious! And any violation, not to mention the actions of a racist or chauvinistic character immediately entails the most severe measures. Including the possible exclusion of [CSKA Moscow] from the tournament …”