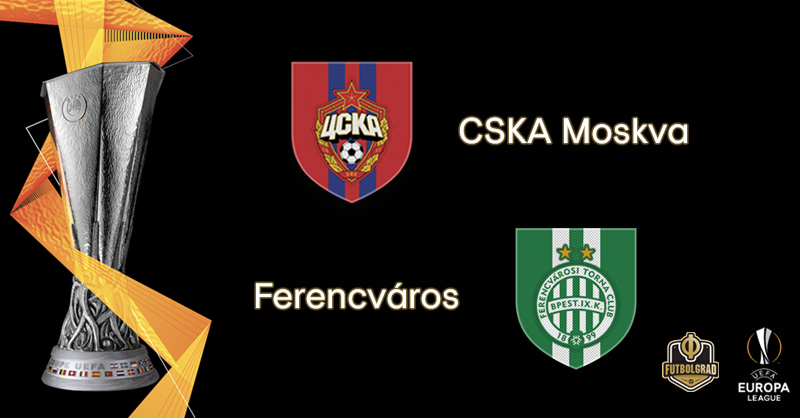 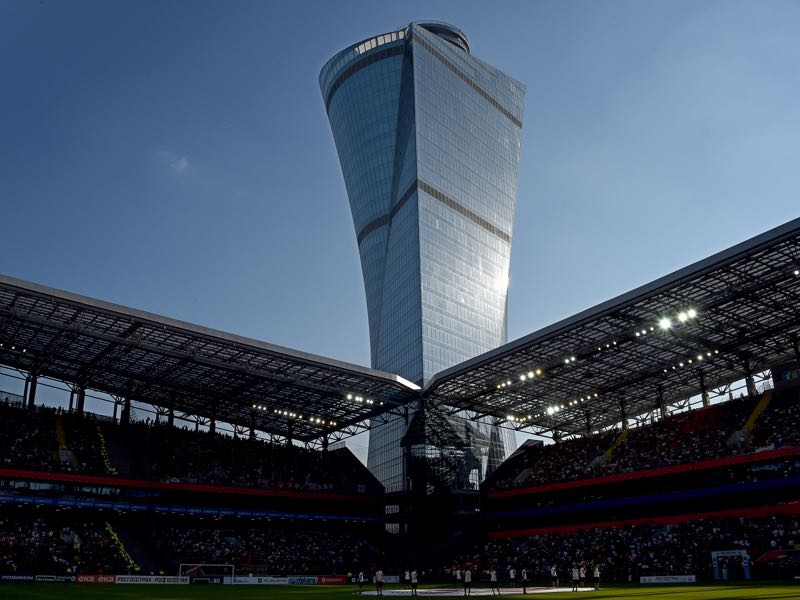 CSKA Moscow vs Ferencváros will take place at the VEB Arena in Moscow. (Photo by Epsilon/Getty Images)

Just over a year ago, CSKA Moscow were high on the remarkable victory over the reigning European champions Real Madrid. Nobody could have foreseen the result that shook the Luzhniki last October, not even their most ardent supporters. Admittedly Julen Lopetegui’s reign was already showing some signs of weakness – a few weeks later, he would be out of a job – and it was a side without Isco, Gareth Bale, or Sergio Ramos. There was still more than enough firepower to completely outshine CSKA’s newly assembled young side, and yet Nikola Vlašić’s opportunistic goal early on was enough to send a shattering message to their rivals. Although ultimately the campaign ended in disappointment as they crashed out of Europe altogether, doing the double over the most successful European champions of all time was quite some statement in itself.

This campaign though has been a totally different picture. The 5-1 humiliation away to Ludogorets on matchday one was a complete shock of its own and immediately set the group stage up as an unexpectedly tense affair. Espanyol may have exceeded expectations of the previous domestic campaign to return to continental action for the first time in over a decade but were struggling hugely at the wrong end of La Liga, a bland, lifeless display from CSKA in Moscow left them scrabbling around for a lifeline. There are no two ways about it; the pressure is seriously building.

One common theme has been the horrendous raft of injuries that have struck Viktor Goncharenko’s side. Fortunately, most of the defenders who were ruled out last month are back and available, so there are no excuses in the short term. Vadim Karpov has been handed some first-team matchday squad experience too, starting in the disastrous 5-1 hammering in Bulgaria in the first group stage, so there is now a growing bank of resources to rely on. One area that is looking light though is up front. The sheen around Fedor Chalov is waning off slightly as his goals are not flowing, and while Takuma Nishimura’s gradual progress is edging on, he is yet to score in the league or Europe. Someone must take this campaign by the scruff of the neck, or it will wither and perish.

One man who knows a thing or two about lethal strikeforces is Ferencváros boss Serhiy Rebrov. The former Rubin Kazan and Tottenham Hotspur forward formed one of the most potent partnerships in European football in the late 1990s alongside Ukrainian national team boss Andriy Shevchenko under the legendary Valeriy Lobanovskiy. After serving Dinamo Kyiv as a player for 11 years, he spent the best part of a decade learning his trade as a coach through the youth setup through to assisting and then managing the senior side. After 12 league titles as a player and three as a manager, Rebrov’s credentials can’t be doubted.

Hungarian football is not what it once was. In the middle of the twentieth century, it stood for enlightenment, modernity, and pure genius through the workings of Gustav Sebes, Jimmy Hogan, and their disciples. The stubborn traditionalists in English football who still believed in the archaic principles of ‘Positions of Maximum Opportunity’ – shorthand for lump it forward as soon as possible – were incapable of dealing with the fluid concepts spawned by one of their shunned sons in Hogan. But for some inadequate preparations and the forward-thinking West Germans in 1954, there would have been a Jules Rimet trophy to show for their place in footballing history.

It would be churlish to compare the likes of ex-Alania Vladikavkaz forward Tamás Priskin with such historic luminaries as Zoltán Czibor, Sándor Kocsis et al., but it does at least demonstrate the changes that have swept over Ferencvaros in its time. They have themselves struggled in the Europa League so far, collecting one point from their opening two matches. While they will be seen underdogs in this group, there is no pride in accepting one’s pre-determined place in the competition. Under Rebrov’s watch, it is unlikely they will meekly surrender to CSKA – expect a fight from both sides.

There was a time when Russia was seen as one of world football’s wealthiest playgrounds for big-name signings, and while there has been a recent resurgence of spending this past summer transfer window, the levels are light years away from the big five leagues. In that context, the €15 million outlay on Vlašić should not be underestimated, especially for a club with one of European football’s largest debt levels. The ease with which the creative attacking midfielder slipped into a completely rebuilt side was remarkable, and his reward has been a run of starts for the World Cup runners up Croatia. He is far from the only attacking fulcrum in Viktor Goncharenko’s side, but he exudes a confidence that his teammates feed off in the final third. Perhaps the biggest measure of his success in Moscow is that he is undoubtedly a leader in the team that plays as if he has had years of experience, and yet is still only 22 years old. 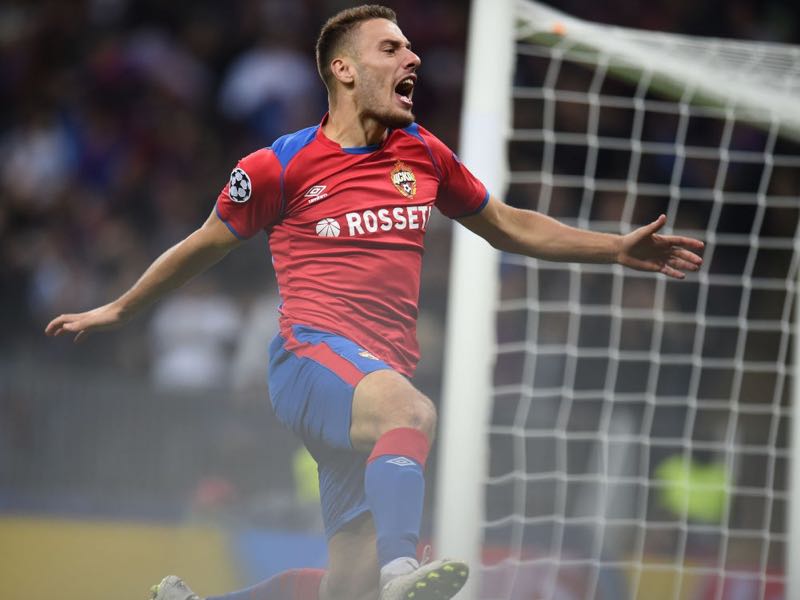 It was perhaps inevitable that Shakhtar Donetsk snapped up Ukraine under-21 international winger Oleksandr Zubkov after a productive season with Mariupol, in which he scored eight goals in 22 games. He was instantly sent out on loan to Hungarian champions Ferencváros, where he has made inroads already; five assists in 10 European games so far, as well as three goals in all competitions, are the tangible marks of his threat. He offers a lot more than just statistics, though. His close control and ambitious dribbling allow him to take on defenders at close quarters and will give plenty of food for thought to CSKA’s youthful backline that has already conceded seven goals in this group stage. 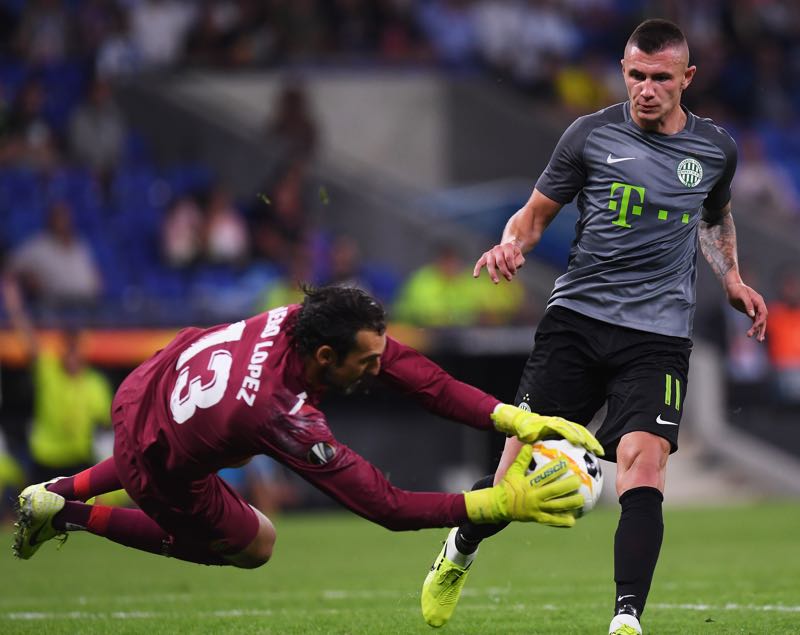 Diego Lopez of Espanyol collects the ball under pressure from Oleksandr Zubkov of Ferencvarosi during the UEFA Europa League group H match between Espanyol Barcelona and Ferencvarosi TC at Power8 Stadium on September 19, 2019 in Barcelona, Spain. (Photo by Alex Caparros/Getty Images)