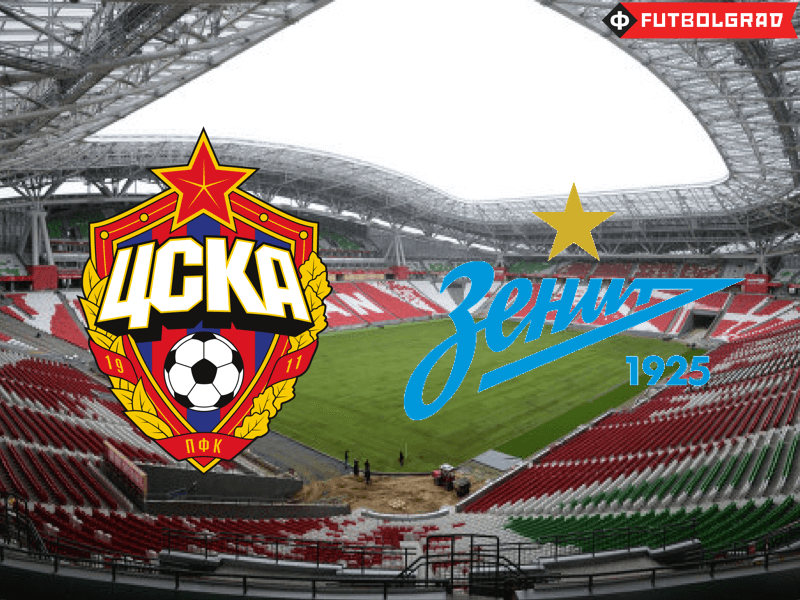 This year’s edition of the Russian Cup final in Kazan sees Russia’s two strongest clubs pitched against one another. Indeed, CSKA Moscow vs Zenit Saint Petersburg has become, in many ways, the Russian El Clasico (you can read more about the history of the match here).

The results of match day 26 of the Russian Football Premier League mean that CSKA Moscow are now very much in the driver’s seat to win the Russian championship—CSKA Moscow are first with 53 points, FC Rostov are second with 51, and Zenit are third with 49 points.

Mathematically, however, it is still possible for Zenit to win the Russian championship, or at least to gain the valuable second spot that would qualify the club for the UEFA Champions League. Certainly four points between first and third seem insignificant in a league where the top clubs have been anything but consistent—the most recent example is Rostov’s shocking 2-1 defeat to debt ridden and last placed Mordovia Saransk on Sunday.

With the current top three stumbling on a regular basis, psychology will have a huge impact on the remaining four matches of the Russian Football Premier League.

CSKA and Zenit, therefore, will want to set the tone by beating their biggest rival in the Cup final on Monday afternoon at the new Kazan Arena. The new stadium in Kazan will be one of the World Cup venues in 2018, and the Cup Final will be one of the first major tests for the arena in terms of organization.

There have been some minor concerns about the Russian stadiums’ readiness for the World Cup, yet the stadium in Kazan has been ready and in use, for several years. Despite this preparedness, there have been issues with the condition of the stadium’s field; Russian Football Union president Vitaly Mutko told Sport-Express that the field was not perfect, but in okay condition.

This should have only a minor impact on the match as both Zenit and CSKA Moscow are strong technical teams—the kind of clubs that would complain about poor field conditions were they to play against poorer opposition. Yet CSKA’s more athletic style of game might give them a slight advantage on a non-perfect field, as CSKA coach, Leonid Slutsky, likes to operate on a more pragmatic counter style tactic, which often sees his team’s fast strikers being fed with long fast balls up the field.

Zenit coach, André Villas-Boas, on the other hand, likes to play more short pass football—a preference that has already cost the club points against poorer opposition in the fall when the fields in Russia get muddier, or are even covered with snow.

When speaking to Sport-Express in Kazan on Sunday, Slutsky already seems to have identified quick counter attacks, as a key requirement for winning the match against Zenit on Monday. On April 3, CSKA Moscow lost their last encounter against Zenit at Saint Petersburg’s Petrovsky Stadium 2-0, and when asked about his biggest lesson from the game, Slutsky replied: “Direct counter play is the best way to play against them. That is the most important factor.”

In some ways the latest result between the two teams would indicate that Zenit were the favourites for the match and, given the fact that on paper the Gazprom owned club has a more valuable squad, it would be fair to assume that Zenit would be once again victories. But given the neutral venue and Slutsky’s ability to quickly adapt his teams to new circumstances—he guided Russia to the European Championships under impossible circumstances—CSKA might have a slight advantage at the Kazan Arena.

This prediction is also reflected in a recent poll that was conducted by Sport-Express in which 51.7% believe that CSKA will win the Cup final. Yet the poll also indicates that this will be a tight match between Russia’s two biggest clubs.