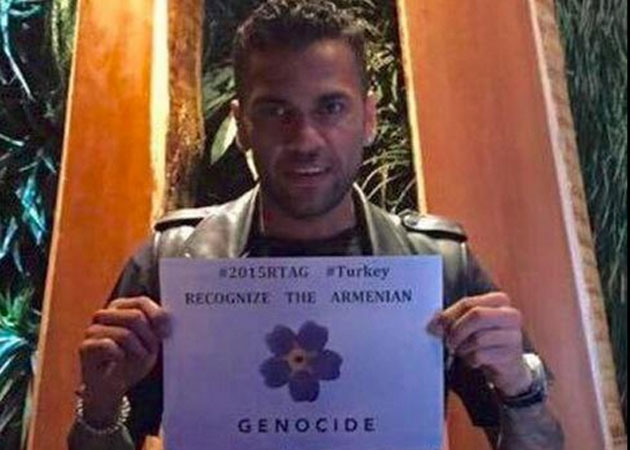 Dani Alves and the Armenian Genocide

It was an innocent tweet by FC Barcelona’s Brazilian defender Dani Alves on April 24, the day when millions of Armenians commemorated the centenary of the Armenian Genocide.

Depending on the sources the Ottoman Empire killed 800,000 to 1.5 million Armenians during World War I and forcibly deported countless others from what is now Turkey. Turkish officials have acknowledged that atrocities were committed but have denied that there was a systematic attempt to mass murder Armenians.

Alves’ tweet, which has since been erased from his official account, showed a picture of him holding up a piece of paper on which he asks for Turkey to recognize the Armenian Genocide.

The tweet immediately caused a storm of criticism by Barcelona’s many Turkish fans. Furthermore, the club also has a commercial partnership with Turkish electronic company BEKO, and with Turkish telecommunication company Avea. These commercial partnerships were likely the reason that Alves eventually erased his tweet from his Twitter account. Later Alves issued a new tweet apologizing for the earlier message.

This incident therefore highlights the influence of commercial partners on football clubs such as Barcelona and their players. In the past the stories of Atlético Madrid, San Lorenzo and Peñarol have highlighted the level of operational control sponsors such as Azerbaijan demand over the clubs that they sponsor.

Players such as the Brazilian Sócrates who took a stance against the military dictatorship in his home country and inspired an entire generation to initiate a democratic revolution in Brazil, or the German Paul Breitner, who in the 1970s was often seen carrying communist literature to Bayern Munich practices, actively stood for their political ideology without worrying about repercussions by commercial partners.

The case of Alves, however, shows that in today’s football players are not supposed to show opinions that diverge from the brand name of the club and its commercial partners. This is exemplified in the Alves case where Turkish corporations in accordance with FC Barcelona may have made sure that Alves, who has 6.22 million followers on Twitter, retracted his condolence to the victims of the Armenian Genocide. In this case Barcelona, and even Alves have to ask themselves whether sponsorship is worth more than the right to speak out for once political believes.