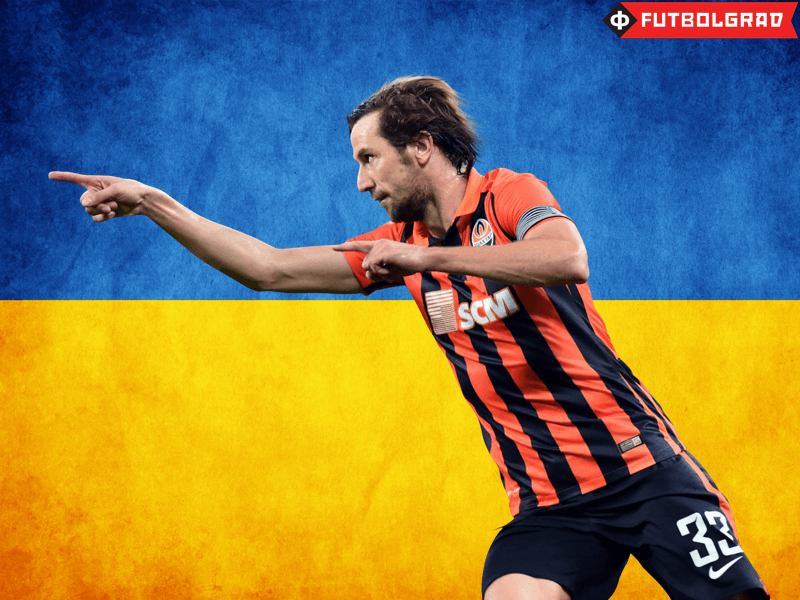 Darijo Srna, captain of Shakhtar Donetsk and the Croatian national, is indispensable to both Shakhtar head coach Mircea Lucescu’s plans and the Croatian national team’s aspirations. For almost 13 seasons now, Srna has firmly held the right back position in Shakhtar’s starting eleven—he is only 11 games short of breaking Mykhaylo Sokolovsky’s club record of 485 appearances.

Srna, who is often referred to as the Icon of Shkahtar, has been the captain of Croatia’s national team for 8 years and with 127 appearances holds the record for the most appearances for the national team in Croatian history. Also in a recent interview for Sportske Novosti Srna revealed that “Shakhtar is his second home and family, all his visions and plans are associated with the club”.

Darijo Srna – How He Became the Icon of Shakhtar

Darijo Srna signed for Shakhtar in summer of 2003, along with his Hajduk Split teammate Stipe Pletikosa. But, unlike Pletikosa, Srna left a mark on Ukrainian football.

On the first day of July 2003, Sportske Novosti revealed that a private airplane would pick up Srna from Split. “Hajduk director Igor Štimac traveled from Split through Zagreb to his final destination Monte Carlo where he held negotiations with Shakhtar president Rinat Akhmetov about purchasing Darijo Srna. It seems that negotiations are in final stage as in Split, Srna already awaits a private airplane from the Ukrainian businessman.” 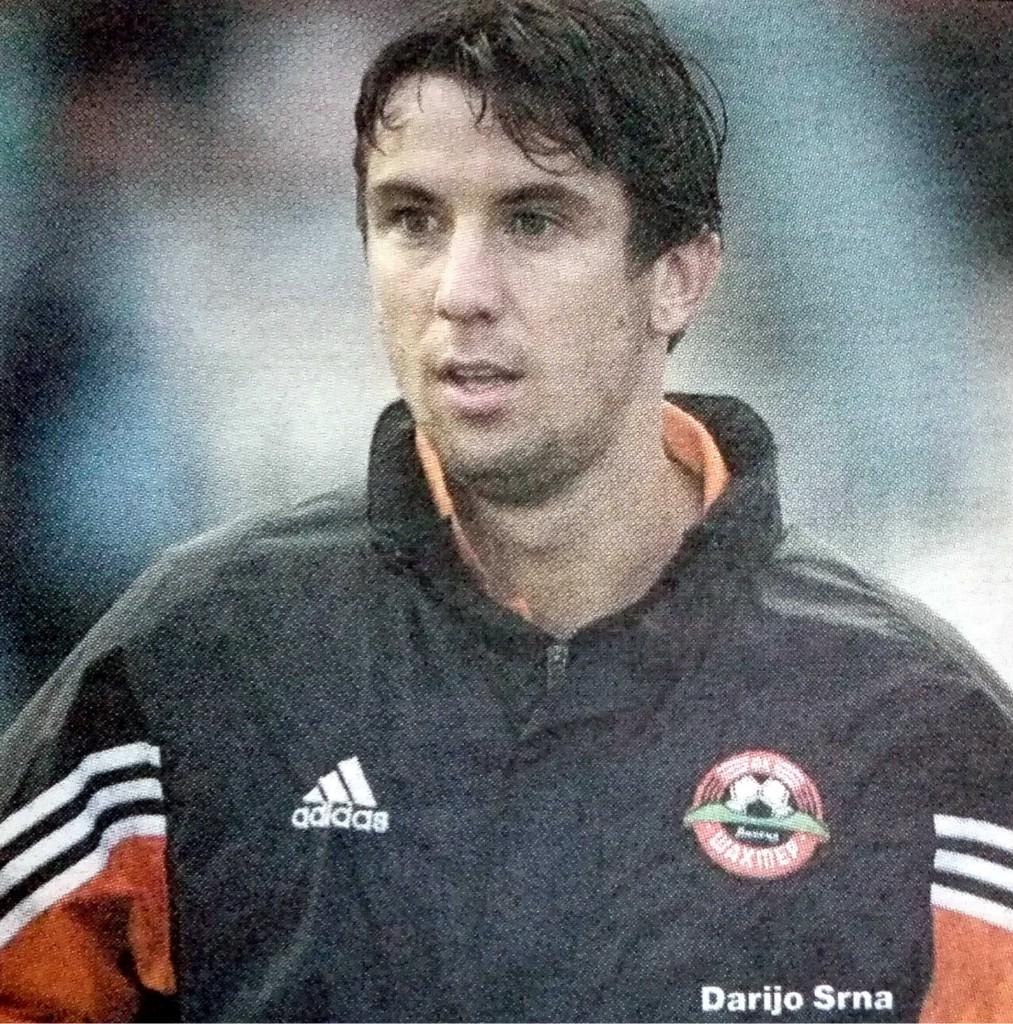 One day later Srna confirmed he would sign for Shakhtar, and word quickly spread around the Hajduk training camp that Srna ordered two Mercedes cars for his father and himself.

“On Friday morning I’m traveling with Igor and Damir Štimac to Ukraine.” Srna told a reporter, who had problems contacting Srna, as he had changed his mobile phone number for the seventh time that year. Regarding rumors about new cars, Srna said “There will be enough money for everyone. The most important thing right now is improving the living standard of my family in Metković.”

Srna further added “I ordered a number 18 shirt at Shakhtar. That is my favorite shirt number, which I wore for three years at Hajduk.”

In regards to the question about why did he opted for Shakhtar and turned down offers from Ajax Amsterdam, 1. FC Kaiserslautern, Borussia Dortmund, Srna stated: “I’m happy to sign for Shakhtar, although some people told me ‘What are you going to do in Ukraine’. When Igor Štimac revealed the conditions Shakhtar offered, I accepted it immediately. I didn’t want to sign for a high reputation club for peanuts. After they sign you, they put you on the bench, and that’s the last thing I wanted for myself. I want to play, not observe the games.”

On July 5, 2003 Srna signed a three-year contract worth $500,000 per season and officially became a Shakhtar Donetsk player. As the media reported, the transfer fee was around $2,000,000, which was split evenly between Srna and Hajduk. Although the clubs’ owner Akhmetov gave Srna $25,000 as a gift for signing for Shakhtar, the 21-year old Croatian international was unhappy with one thing. “I asked for no. 18 shirt, but as Polish international Mariusz Lewandowski already wears that shirt number, now I don’t know what to do.”

But at last, he choose a new shirt number which he revealed in an interview while talking about his first impressions with the squad: “I played in an inter-squad training session match two days ago, head coach Bernd Schuster positioned me on right wing in 4-3-3 formation. I’m still not ready to start from the beginning, as I talked with the coach and we agreed that I came in as substitution in the first several games. Now lets start doing what we are here for, to win the Ukrainian championship! Shirt number? The only other numbers available where the numbers 6 and 16, but I wanted number 18. In the end I took Number 33, and I don’t even know why I choose it.”

Just several days after joining Shakhtar, he sent a contingent of his shirts to his favorite city—Split. At first, when someone mentioned Split, Srna would get nostalgic. But, in Donetsk he quickly found new friends. “Pletikosa and I are still looking for big house or two luxurious apartments in downtown Donetsk. For now, we are situated in Shakhtar training camp, 15 km from Donetsk. We hang out with Nenad Lalatović, Zvonimir Vukić and Predrag Pažin. Every day we go together to Italian restaurant. Don’t be surprised, Donetsk has everything we need.” 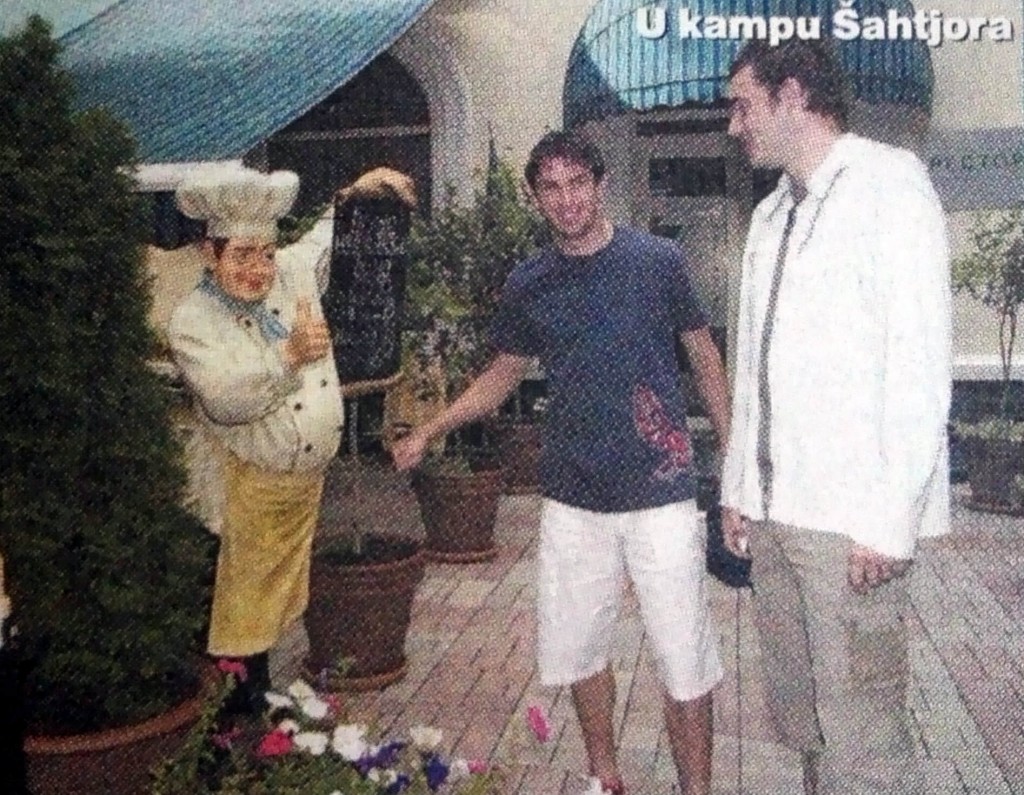 The Italian restaurant located inside Shakhtar Donetsk’s training base – Image via telegraf.com.ua

Asked about his impressions of the city, Srna answered: “The First impression was terrible. When we arrived to do the medical test in the city hospital, I told Pletikosa ‘lets go home, this is impossible’. The airport condition was hard to look at, so you could imagine state of that hospital. Of course, we couldn’t return and now I’m satisfied with the city. Downtown Donetsk reminds me of Zagreb. Lot of stores, you could buy all you need. But, as you travel further from city center, you could see immense life contrast. Altogether, however, its at least 30% better than what I expected. I will stay here for a long time…”

Srna was also impressed with Shakhtar owner Rinat Akhmetov: “He arrived at the training session with 13 Mercedes S-class, what an image that was! Besides him, you could always see 20 bodyguards, and he treats the players as his own sons.” Darijo Srna was especially impressed by the fact that Akhmetov bought several Mercedes CL 500 for ‎€85.000 each, for all the players. “On Sunday the ‘beast’ will arrive, the fulfillment of my dreams, a Mercedes CL 500. No one in Split has such car. Only me and Miroslav Ćiro Blažević own that class in Croatia.”

Srna took Time to Adjust to Football in Ukraine

Those first impressions showed how Srna quickly adapted to his new life; however, on the football pitch it was not that great. In first five games, Srna played only three times coming on as substitution. That generated frustration for young Srna, as he played an important role back in Split.

In an interview for the Croatian press, two months after joining Shakhtar, Srna claimed he might leave Donetsk in the winter due to lack of playing time and demanded that head coach Schuster give him a chance. German coach Schuster responded calmly: “I have to admit I hadn’t heard about Srna before arriving in Shakhtar. Currently on his position Andriy Vorobey plays well. Srna will need time to adapt, it’s not easy to come to Shakhtar and play right away. He is a young player, and he will get his chance. And he needs to show patience.”

Later in the season Srna got his chance and grabbed it by scoring three goals in 29 competitive appearances. The rest is history. 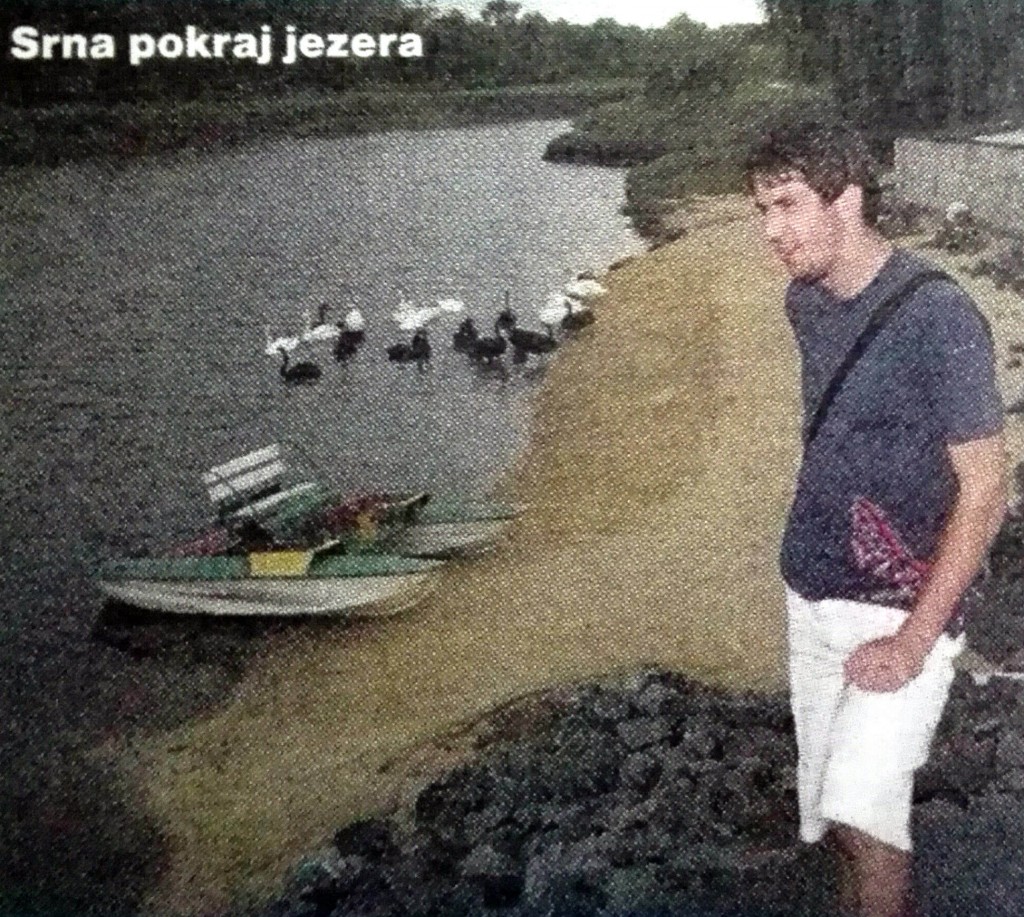 Darijo Srna next to the lake located inside Shakhtar’s training base – Image via telegraf.com.ua

After six months in Donetsk, Srna radiated happiness. He shed light on that matter with a story, “One day I walked by the lake in the training camp with president Akhmetov and told him: ‘I could stay here for a long time, I would even extend my contract for new five years.’ That’s how much I liked Donetsk and Shakhtar. The President immediately responded: ‘That’s the right approach, boy’.”

Although young Srna dreamed of Western Europe and the biggest European clubs, that summer of 2003 he woke up in Donetsk, in the heart of Eastern Ukraine. Srna is one of the first key pieces of the jigsaw puzzle that Shakhtar owner Rinat Akhmetov has built since taking over the club.