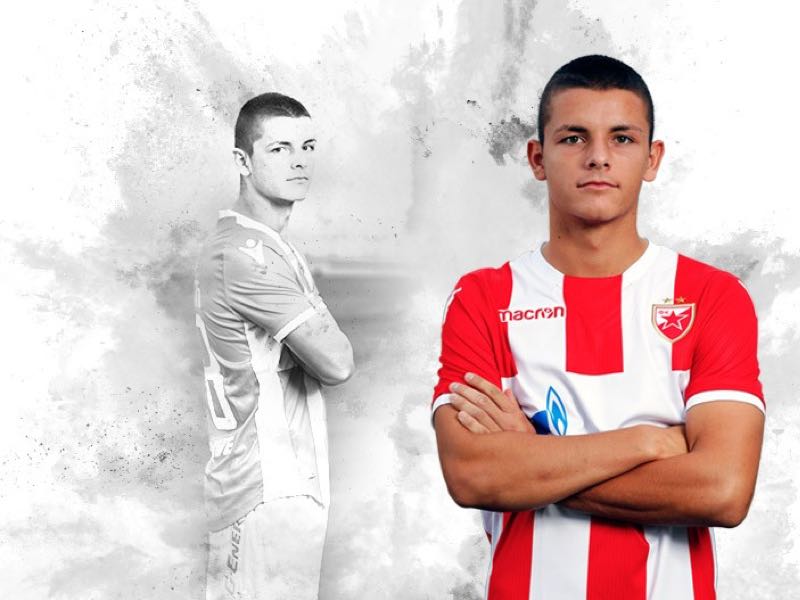 Red Star Belgrade have always been known for producing some of Europe’s biggest talents. The latest prospect to come through is 18-year-old Bosnian-Serb Dejan Joveljić.

With qualification secured for the Europa League knockout stages and an exciting encounter with Russian giants CSKA Moscow on the horizon, Red Star Belgrade finished 2017 with an incredible positivity and a measure of excitement for the coming months ahead. However, a combination of a stadium ban ahead of their next European home fixture at the Marakana, and the potential of some of Zvezda’s key players leaving over the lengthy winter break has proven to dampen the original high spirits of supporters somewhat.

Red Star Belgrade look unfortunately be losing their goal machine striker Richmond Boyake, as some clubs, including English giants Chelsea, have been touted to sign the Ghanaian, and with his contract running down Crvena Zvezda will look to cash out on the striker this transfer window. The club is always forced to sell to soften the high levels of debt that has existed at the club for decades now. The journeyed striker, El Faroude Ben Nabouhane, has been brought in from Olympiacos, who themselves have looked to free up their wage bill as Kevin Mireles returns to Athens from Everton.

Ben featured alongside former Partizan hitman Uros Đurđević upfront for the Greek Champions and even claimed two goals for Olympiacos in their Champions’ League Group Stage Qualifier against Partizan, which has already made him a hero amongst the Red Star supporters. However, appearances over the last few months have been few and far between, and a move down the striking pecking order in Greece has helped to facilitate his move to Belgrade.

However, within their youth ranks, Crvena Zvezda have a starlet who is more than capable of, given a tad more experience, not only replacing Richmond Boyake but surpassing his goal record for the club. At only 18 years of age, Bosnian-Serb Dejan Joveljić is one frightening prospect for opposition defences. Scouted in his infancy from his local team in Bijeljina in Republika Srpska, Joveljić signed his first professional contract with Red Star Belgrade before his seventh birthday.

Since then, Joveljić has been incredibly prolific in Red Star Belgrade’s various youth teams. In his last season for the U19’s, Joveljić scored 33 goals in 14 appearances, with a hat-trick against Partizan Belgrade a particular highlight. On an international front, in 2017 Joveljić represented Serbia’s U18’s, U19’s and U21 sides scoring some goals for his country. Joveljić’s finishing and movement for an 18-year-old is incredible, and that poachers’ instinct has helped significantly in his quest to rack up that unbelievable goal tally.

Joveljić made his debut before the winter break

He made his first-team debut before the winter break against Borac Čačak coming on as a substitute, but this is undoubtedly the first of many appearances for the youngster who has an incredibly bright future in the game. Vladan Milojević has been well aware of his goal-scoring prowess, however with important Europa League games on the horizon, the experience of the journeyed Ben, alongside Serbian hitman Alexander Pešić who has 17 goals in 22 appearances, is probably a more reliable option. It would be the smartest selection as it would be a shame to rush the development of such a prospect.

The big question posed, however, is not if, but how long can Red Star keep hold of such talent? Fellow exciting talents, brothers Luka and Ivan Illić have both been signed by Manchester City, albeit they have been loaned back to Red Star to continue their development. It is surely only a matter of time before a lucrative offer arrives from a top European club like a deal did for Luka Jović, Marko Grujić and others before them.

If Zvezda can keep hold of the Joveljić long enough to reap the benefits of his incredible talent, then not only will it benefit the club ten-fold. But they can use the striker to their benefits domestically and on the European front, but when he does eventually leave Belgrade, he will be more developed, and Zvezda will be able to charge a great deal more for his services. Only time will tell whether this will be the case.