It has been another quiet transfer window in the Ukrainian Premier League. The big two, Dynamo Kyiv and Shakhtar Donetsk, in particular, seem to be reluctant to spend any money. But, while Shakhtar are in a strong position in the league, Dynamo Kyiv need to strengthen their squad and, as a result, could be selling 22-year-old Paraguayan striker Derlis González.

At a first glance, selling a forward of Derlis González’s calibre makes no sense. But Dynamo have recently been rumoured to experience some financial shortages, as the club was embroiled in a legal conflict with the National Bank over its assets at Privat Bank. As a result, Dynamo Kyiv’s hands were bound during the summer’s transfer window, which meant that the club could not bring in the necessary players to mount the same sort of challenge in the UPL, and in the Champions League as they did last year.

Furthermore, the money earned from Aleksandar Dragović’s transfer to Bayer Leverkusen was mostly used to fill financial holes. All of this explains why Serhiy Rebrov seemed reluctant, at one point last season, to continue as the head coach of Dynamo, because he must have felt that he had achieved the maximum that was possible with the squad available to him.

Derlis González could bring in much needed funds

Now, halfway through the season, Dynamo are in a precarious situation in the league—13 points behind Shakhtar Donetsk, and already out of Champions League contention after a horrible group stage that saw Dynamo finish in fourth place. There is, therefore, no doubt that the club will need to earn some money in order to make improvements to the squad, if they are to secure second place in the league and have a shot of Champions League qualification, and also if they are to become a challenger for Shakhtar in the long term. 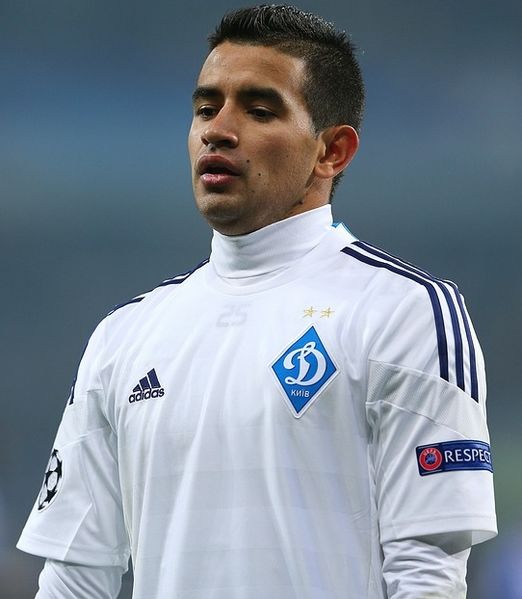 Derlis González did not have the best of seasons at Dynamo Kyiv – Image by Aleksandr Osipov CC-BY-SA-2.0

The most logical solution would be to sell Andriy Yarmolenko. But the club’s previous reluctance to let the Ukrainian winger move abroad, and a recently signed new contract, have killed any potential market for the winger this winter—SSC Napoli appeared to be interested at one point this winter, but the trail has gone cold.

With Dynamo needing to generate money, and with Yarmolenko not likely to leave the club, Dynamo Kyiv will have to look at the possibility of cashing in on other players.

Dynamo have several options on the wing

One option would be to sell Yevhen Khacheridi, but the defender’s contract is going to expire in the summer and, with this sale, Dynamo are unlikely to generate the sort of windfall they need to regenerate the squad. There have also been frequent rumours about Domagoj Vida, but the Croatian did not have the best of years, and is therefore unlikely to generate the sort of money needed by the club. Furthermore, with the possibility that Dynamo will lose Khacheridi in the summer, it would be foolish to sell the Croatian centre back now.

In central midfield, Dynamo have several options to generate cash, but none of the options—Serhiy Sydorchuk, Denys Garmash, or Serhiy Rybalka—would generate the sort of cash that the club needs.

This pretty much leaves Derlis González as the only viable option to generate any sort of financial windfall in the transfer window.

Dynamo could command a decent transfer fee for Derlis González

Bought for €9,4 million from FC Basel in 2015, Derlis González has not shot the lights out for Dynamo this season. He has scored just twice, and assisted four times, in eleven Premier League games this season. Furthermore, Dynamo have recently brought up Viktor Tsygankov from the youth academy. The Ukrainian is considered a highly talented player, who can play on both wings, and has become a symbol of the club’s new policy to develop from within.

With a market value of €7.5 million, and a contract until 2020, Derlis González will likely command a transfer fee of €10 million to €12 million. And the native of Mariano Roque Alonso is the sort of player that could generate interest from a number of English Premier League clubs, Serie A—Napoli are reportedly interested—and perhaps, more important for Dynamo, clubs from the Chinese Super League.

Derlis González was once understood to be one of the brightest prospects of the Swiss Super League. The time in Kyiv may have somewhat diminished his status but, at the same time, it is also obvious that he just did not fit in the squad at the club. Hence, scouts may overlook his lack of production for the club side, and view the player purely for his obvious potential.

Finally, there is the fact that Derlis González was a massive factor in Paraguay’s 1-0 victory over Argentina at the Estadio Mario Alberto Kempes in Córdoba this October. He scored the winner in the 18th minute, shocking Argentina at home—a result that preserves Paraguay’s chances of qualifying for the 2018 World Cup in Russia.

Dynamo have shown, in the past, that they are a tough negotiator, and with several clubs desperately looking to bring in an attacking midfielder who can also play up front in a 4-4-2, there should be a substantial market for Derlis González in the winter transfer window.