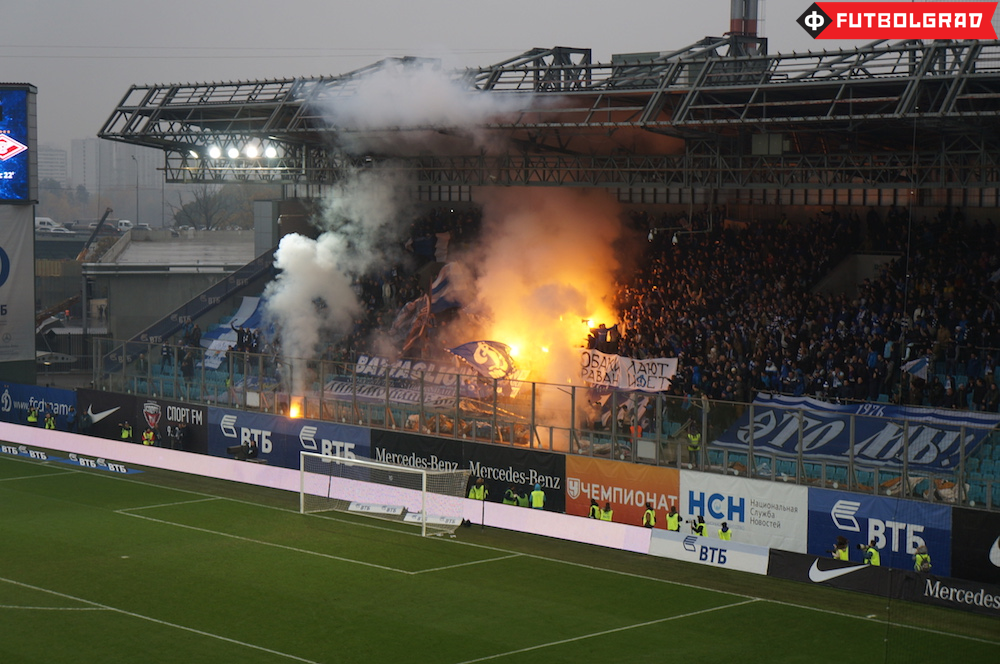 “I hate Khimki” it is a phrase that was often reiterated while we made our way to the town outside of Moscow where we planned to visit Russia’s oldest derby. Khimki, located north west of Moscow in the Moscow oblast was officially founded in 1939, and its claim to fame is that it was the point at which the German troops advanced closest to Moscow during World War II. After the war, the city became the site of several aerospace defence military centres, and since the fall of the Soviet Union the town has seen a drastic spike in population due to its close proximity to Moscow.

Today Khimki has a population of 190,000 people, and is home to Arena Khimki, a stadium that was built between 2005 and 2008 in the belief that Khimki’s growing population could sustain professional football. FC Khimki, however, plays in the third division and although officially based at the stadium usually uses the much smaller SK Rodina. Yet Moscow’s stadium crisis has meant that both CSKA and Dinamo Moscow have been forced to play their home games in Khimki rather than in Moscow proper. 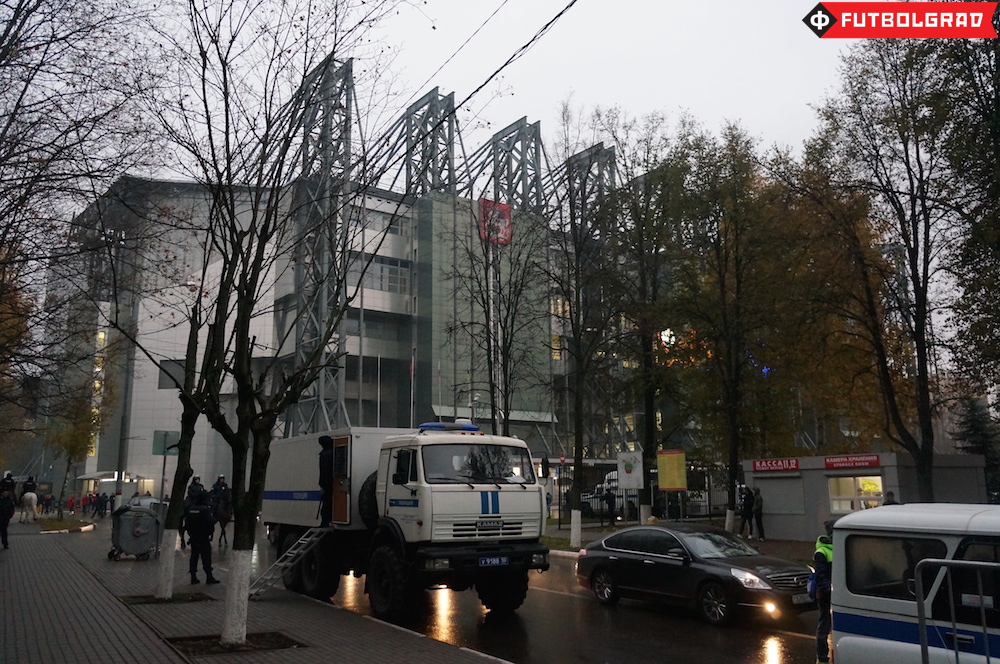 On Sunday October 25, therefore, the stadium hosted Russia’s oldest derby between Dinamo Moscow and Spartak Moscow. But a game that in the 1920s, 30s, and briefly during the time of Lev Yashin in the 1950s, and 60s, was considered the biggest derby of the city has lost much of its glamour. In the 1980s Dynamo Kyiv replaced Dinamo Moscow as Spartak’s biggest rival in the Soviet Union—a rivalry that has survived even the breakup of the USSR—and in Moscow, as one CSKA Moscow fan explains to me, the biggest derby is now between CSKA Moscow and Spartak Moscow “which you can compare to the games in Istanbul.”

Dinamo vs. Spartak – Decline of a Derby

The Russian sports journalist Igor Rabiner attributes the decline of Russia’s oldest derby to Dinamo’s lack of real success since the 1970s—the team is simply unable to make the derby an interesting one. Furthermore, Dinamo hasn’t won a trophy since 1995—when they won the Russian cup—and as a result has experienced a massive drop in support in the city, which according to Rabiner has further reduced the importance of the derby. 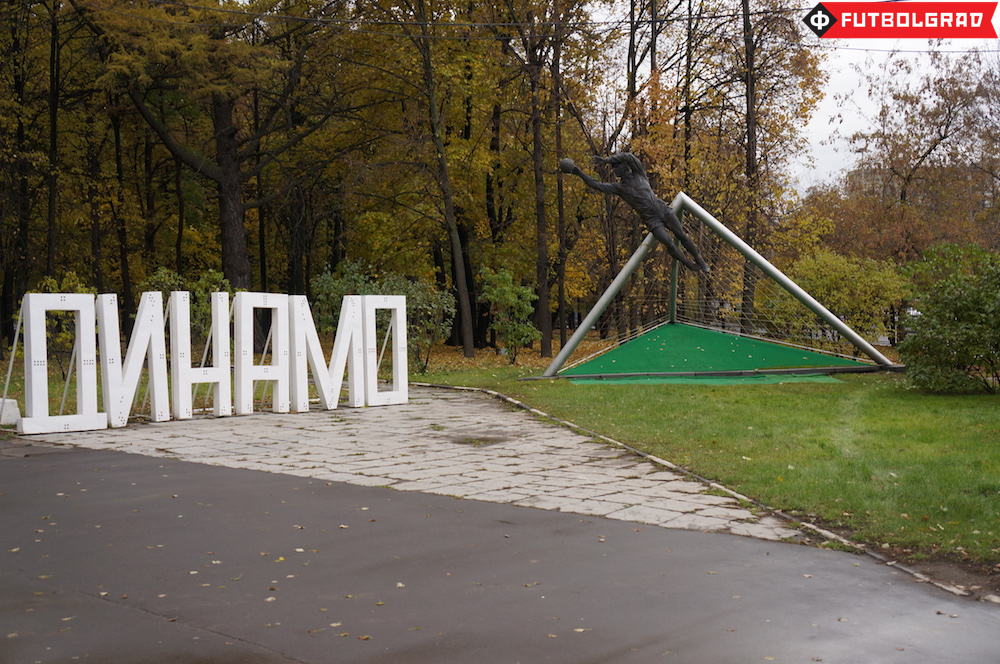 Despite the fact this was not Moscow’s biggest derby, I still expected that the Arena Khimki would be sold out for this match—after all the stadium only holds 18,636 people. Yet as I surveyed the stadium from the press box I noticed that a fair number of seats have remained empty, and indeed a later announcement confirmed that the official attendance of the match was 13,600 people.

This is especially surprising given the fact that Spartak usually enjoys good support even at away matches, and indeed Spartak fans made up the majority of the fans in what was nominally a Dinamo home game. But on the morning of the game, Russian authorities shut down Khimki’s main railroad station as Ilya explains to me “for security reasons, Russian fans don’t behave well in trains.” 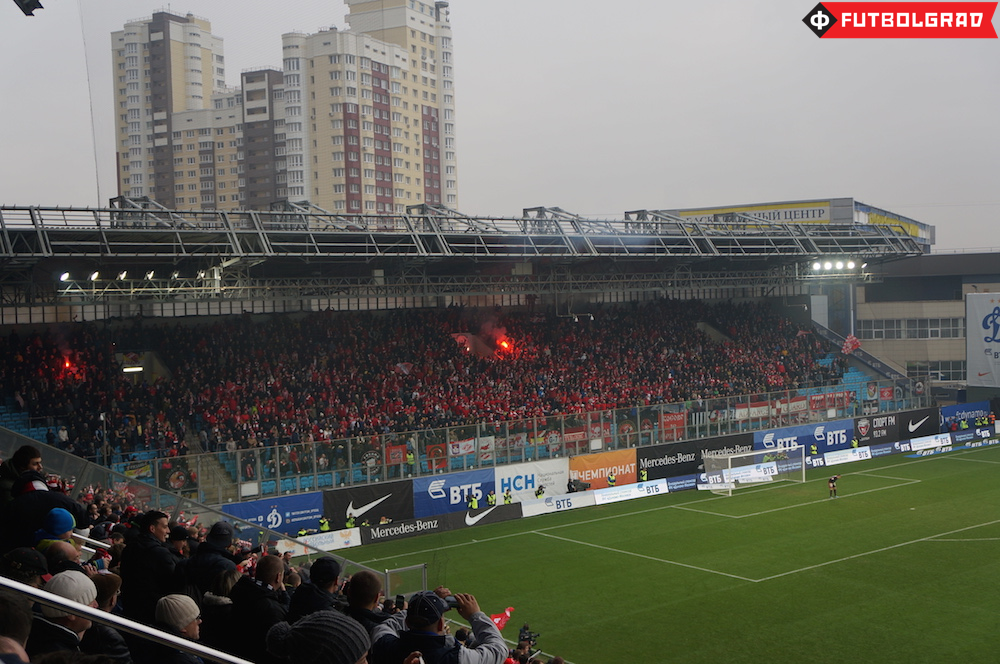 This meant that there would be no elektrichka suburban train service from Moscow to Khimki leaving only taxis and marshrutka—the often overfilled yet cheap private taxi busses are not always the most comfortable form of transport, but have become a vivid symbol of post-Soviet public transport.

Given the fact that the roads around Moscow often resemble the blocked arteries of a chain smoker, driving out to Khimki seemed not to be the best option that day, and may have indeed caused many fans to seek alternative entertainment closer to home. The difficulties of reaching Khimki from the centre of town also often leads to the previously mentioned phrase “I hate Khimki”, which is commonly used by those who follow CSKA Moscow and Dinamo Moscow on a regular basis.

But Khimki’s location is not the only reason why the derby failed to attract more than 13,600 visitors. Neither Dinamo nor Spartak has had any major success in recent years. Dinamo especially has been involved in financial and political turbulence that resulted in the club being excluded from the Europa League by UEFA’s Financial Fair Play (FFP) watchdogs for violating FFP regulations. The club subsequently begun a restructuring process directed toward making Dinamo financially self-sufficient from their oligarch owner Boris Rotenberg. 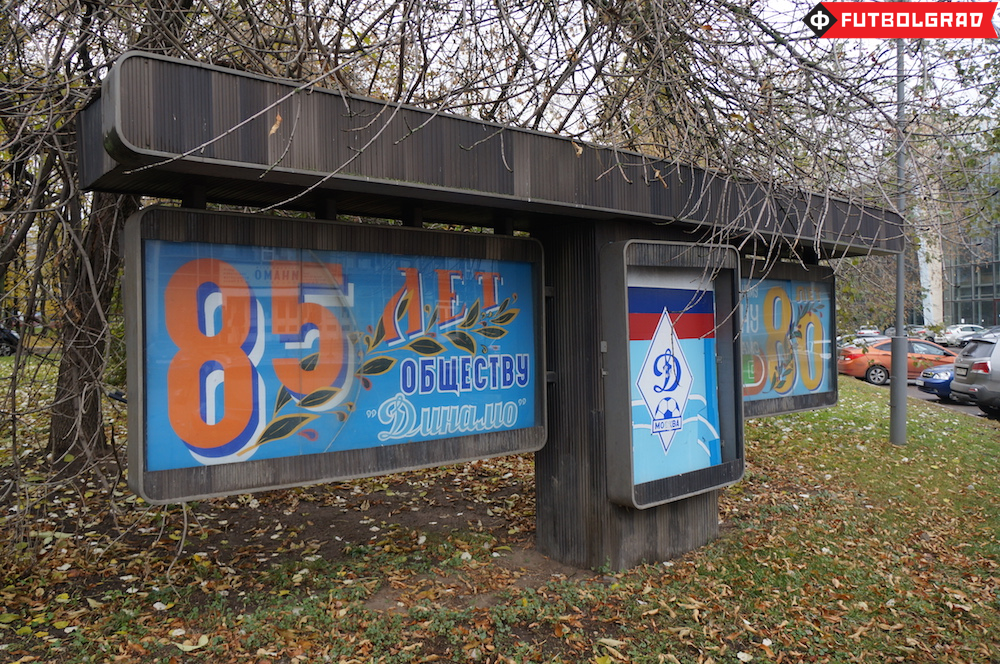 Dinamo’s Base by Petrovsky Park. The club hopes to return to its former glory – Image via Manuel Veth

Furthermore, Dinamo has agreed to sell the Russian winger Aleksey Ionov to Spartak Moscow in the winter transfer window—he was conveniently left out of the Dinamo derby squad. Also there are strong rumours that Dinamo may sell their last biggest star Aleksandr Kokorin, this winter to bring in much needed cash. 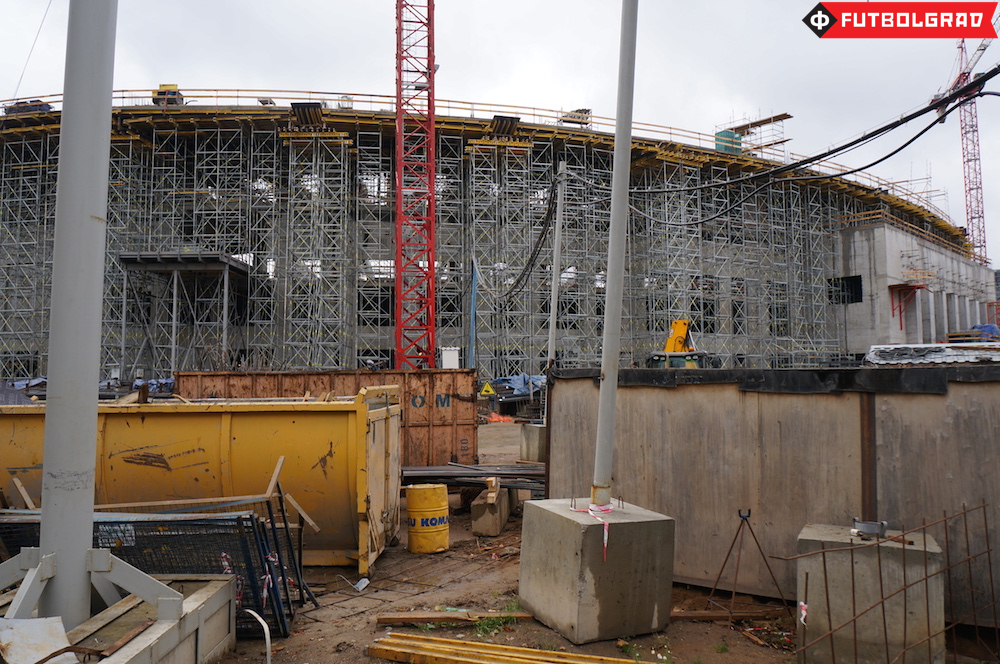 Dinamo hopes that a new arena—which is currently under construction at the location of the old Dinamo Arena at Petrovsky Park in Moscow—will help the club attract investors, and will also allow the club to generate more income through ticket sales. The new stadium is to be opened in 2017, and the architectural renderings indicate that it will be a magnificent facility, but two years is a long time in football, and judging from the current progress at the stadium, the official opening could be postponed until after the World Cup—especially given the fact that the new Dinamo Arena was not selected as a World Cup venue.

Spartak – Changes On and Off the Pitch

Spartak Moscow, on the other hand, has seen some major changes in key position of the club’s management. The former Spartak Moscow player and club legend Dmitry Alenichev took over from the Swiss coach Murat Yakin in the summer, and the owner Leonid Fedun stepped down from any active role at the club in May and handed over the decision making power to the new sporting director Sergei Rodionov.  Spartak also moved into the brand new Otkrytiye Arena last season. In May Fedun stated that it was time “to give authority to professionals, who may be more successful and competent in leading the people’s team to titles.” At the same time, he seems to have a hard time following through with this as he continues to give advice to his coach and sporting director through the press. 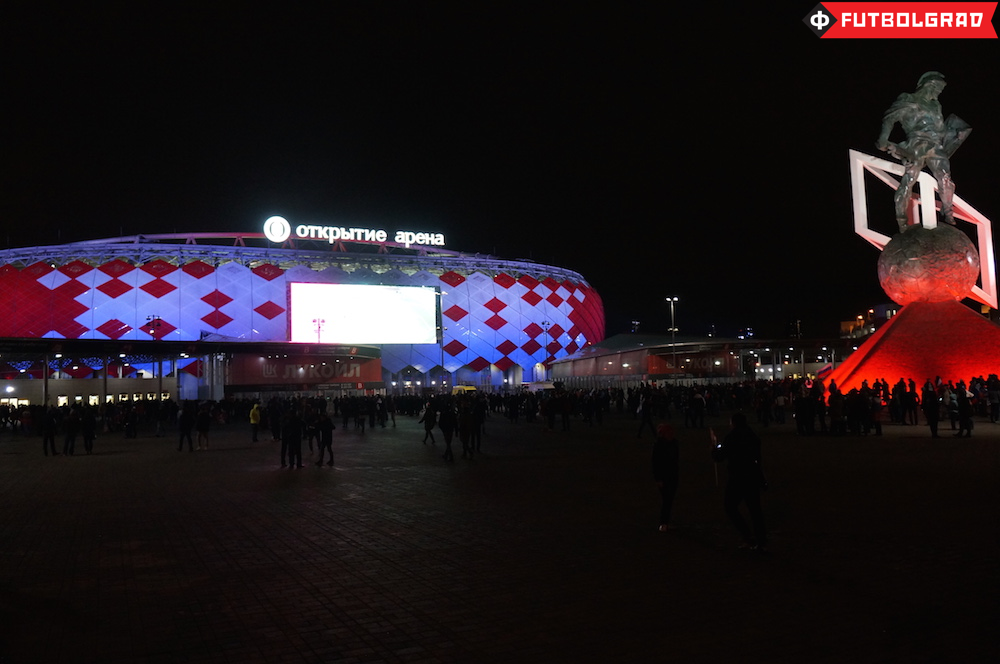 Spartak was also one of the few teams this off season that actually invested money into their squad. Rodionov’s major task was to clear out the squad that had been assembled by former coach Murat Yakin, and to replace players such as the Spaniard José Manuel Jurado, and the Paraguayan striker Lucas Barrios—Rodionov did well to sell Jurado to FC Watford for €8.6 million, and Barrios to Palmeiras for €2.9 million.

Rodionov replaced Barrios with the exciting young Cap Verdean striker Zé Luís, signed for €6.5 million from Sporting Club Braga (Portugal), and Jurado with the Bulgarian playmaker Ivelin Popov, signed for €6 million from Kuban Krasnodar. Rodionov’s business dealings meant that despite spending significant money on new players, the club only recorded a transfer deficit of €500,000 this summer.

Yet the changes were not enough to entice every Spartak fan to make the long journey out to the Khimki Arena, especially given the fact that Spartak once again does not look like a title contender, and will have to fight hard to even reach a European qualification spot.

These factors contributed to the low turnout at the Khimki Arena, however, those who did, brave the long journey in a marshrutka, or taxi to Khimki were treated to a wonderful match. Dinamo’s Kokorin struck first in the 17th minute after he tapped in a low cross by Yuri Zhirkov, but Spartak equalized just five minutes later when Spartak Moscow’s Quincy Promes escaped Dinamo defender Aleksei Kozlov. The game then dwindled down, and for some time appeared to turn out to be one of those typical boring 1-1 derby draws. 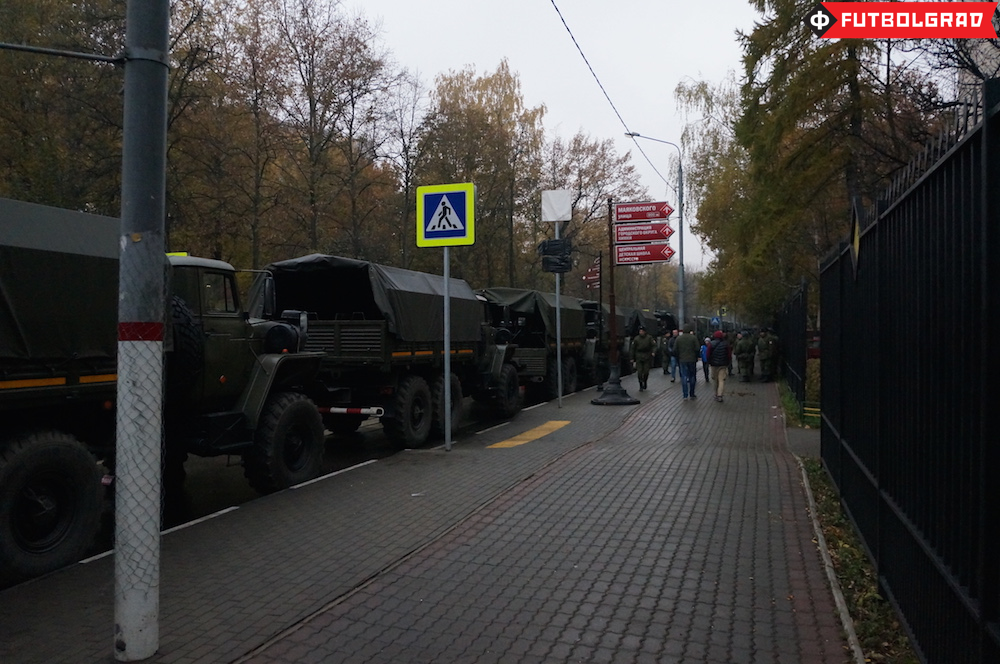 But in the 67th minute Spartak goalkeeper Artem Rebrov gave away a juicy rebound to Pavel Pogrebnyak who scored from five metres out to make it 2-1 for Dinamo. Spartak, however, just needed three minutes to recover as Denis Davydov headed it in a diverted cross to make it 2-2 in the 70th minute. I felt certain that this would be the final score, and it very much appeared to go this way until the final minute of extra time when Davydov played a fantastic ball into the box, Promes once again faster than the entire Dinamo defence pounced onto the ball, and ticked it past Dinamo’s goalkeeper Vladimir Gabulov to make it 3-2. Promes was later voted as the man of the match, and received praise from Sport-Express, which called him the red and white Hulk.

The stadium exploded as Spartak fans celebrated a victory achieved in the most dramatic fashion, and which will keep the hopes of Spartak fans alive that the club could at least return to European football. For Dinamo, however, the misery continues, as the club is currently stuck at 10th place, and may have to brace itself for a season that could conclude in a tough relegation battle—especially if the club has to continue to sell all its best players. Dinamo’s season could be almost as miserable as our elektrichka ride back to town.