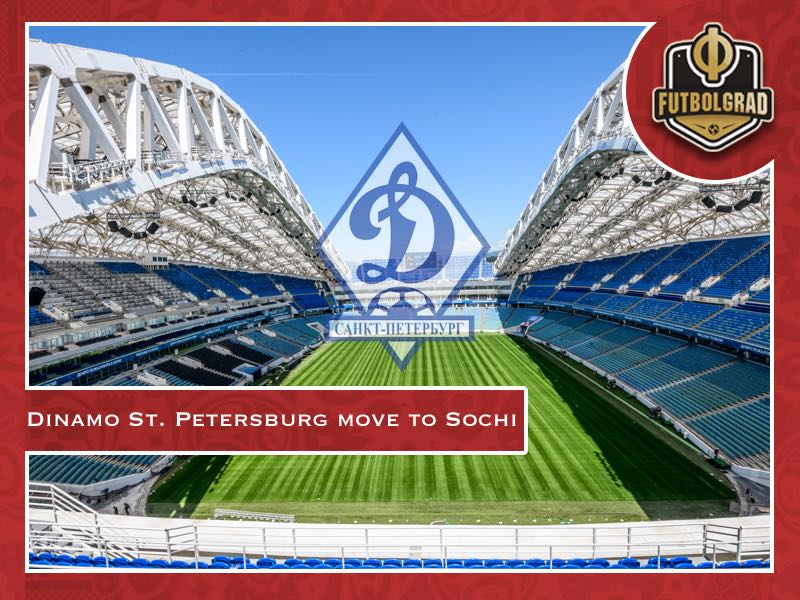 This week Dinamo St. Petersburg have once again vanished off the football map. The issue is again money – though this time it’s ambition with it rather than lack of it that has led to Dinamo’s fourth post-Soviet disappearance. The club’s leadership have just announced that Dinamo are moving 2400 kilometres south to the city of Sochi: from 2018/19 they will continue to play in the second tier Football National League, though under a new name (probably FC Sochi).

Home matches will be played at World Cup venue the Fisht Stadium – the top-class facilities on offer there are ostensibly the main reason for the change. Rumours that the club will have a budget one and a half times larger than at present have been denied by General Director Dmitriy Rubashko, but regardless the aim to go a step higher is there.

FC Sochi will be filling a void as there is no professional team in the city – several have come and gone since Zhemchuzhina were in the top flight in the nineties. The ‘transfer’ of Dinamo also saves the embarrassment of the impressive Fisht being all but abandoned. Perhaps Dinamo could have been left alone and a brand new club could have been founded in Sochi, but taking Dinamo’s league place avoids the inconvenience of having to negotiate Russia’s third tier Professional Football League South – a regional division in which only the champion is promoted to the FNL. Ambitious projects have come unstuck at this level before.

In a strictly cold-headed business sense, the move is logical. The risk with having one wealthy owner is that a club exists on their whim, and so things have come to pass at Dinamo: Sochi’s superior stadium and facilities and that there is no large city rival likely made it a straightforward decision for billionaire Dinamo owner Boris Rotenberg. Had Dinamo been able to use the Petrovskiy Stadium more, things could have been different – when they have played there before they had a decent following. However, in another cold-headed business move Zenit are determined to keep hold of the Petrovskiy alongside their brand new stadium.

For football fans, though – especially those with an eye on history and tradition – the story is anything but logical. Dinamo are St. Petersburg’s oldest club; they were founding members of the Soviet Vysshaya Liga, winners of that division’s first ever game and in 1942 played in the poignant blockade match against Nevsky Zavod in Leningrad. Given this final point, it’s difficult to make an exact comparison with other teams, but the move is something akin to England’s Preston North End not getting a new stadium development and being moved to Eastbourne. Would it happen? Of course not, but then again Dinamo’s recent history has been far more challenging: several new starts, each bringing a few fleeting highlights, then a period of struggle and back under. A genuine rollercoaster club. 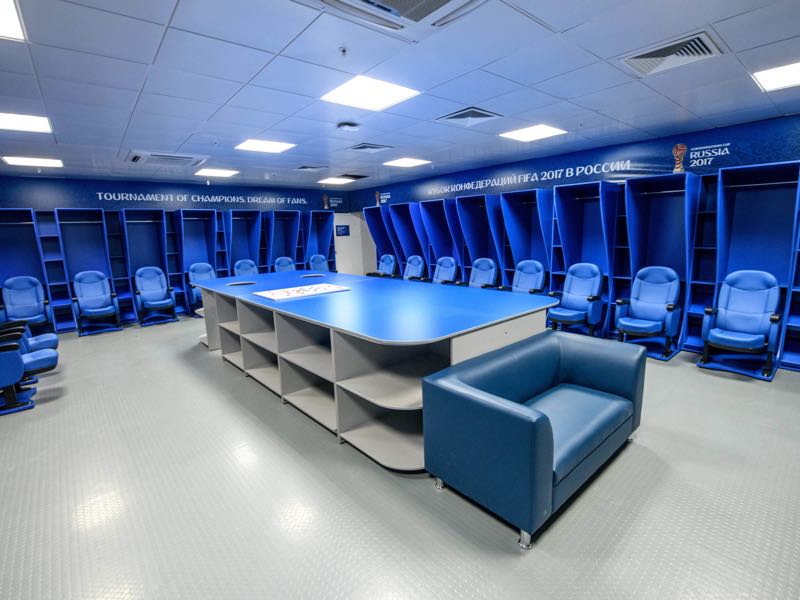 Dinamo fans started a change.org petition to keep Dinamo in the city, which is addressed to Vladimir Putin; they also wrote to the city governor, asking him to end the recent “sad tradition” of the club “reappearing only to disappear”. Some strongly-worded comments appear alongside the petition signatures – many of them focused on the importance of Dinamo’s history. “A legendary club should belong to a legendary city, and not move due to a search for better infrastructure. Money comes and goes, but history is more important – and new chapters of it can be written,” said one signatory. “Football exists for fans, and we must keep historical clubs. Sochi needs to create its own club and not live thanks to the death of others,” was the response of another.

Sadly, the petition is pretty small – just under 350 signatories at the time of the announcement. On one level, this is a sign of wider apathy in St. Petersburg when it comes to the city’s second team. Dinamo’s average gate in 2016/17 was just 672, and Zenit and their fanbase do not seem concerned by the disappearance of the city’s second team. Perhaps, though, it is also a sign of resignation to the fact that it really doesn’t matter – if a wealthy club owner wants to up sticks then he or she can.

Other football fans were also less charitable about Dinamo’s predicament. “Dinamo Leningrad died in 1994,” commented one about the letter to the governor, making the point that since then subsequent Dinamo incarnations have been different legal entities and have had different bases. “I’ve lived in St. Petersburg all my life and have never met a Dinamo fan,” said another. “No disrespect to Dinamo, but it doesn’t seem sensible to keep the club here for the sake of three fans when there is an option in Sochi”. Others cynically pointed out that there will likely be another Dinamo along in a year or two – which will probably get into the FNL and then disappear again.

There is risk attached to the move to Sochi. Dinamo’s gates were the third lowest in the FNL in 2017/18, but Sochi’s average in 2011-12 (their last season at this level) was only slightly less underwhelming at 3000. The Fisht Stadium stands a good chance of attracting curious punters on a one-off basis, although it seems less likely that football fans in the city will make regular trips to matches given the stadium is not actually in Sochi but in neighbouring resort Adler. Will fans buy season tickets for a club with no roots in the area, playing in a league not usually known for exciting football? Assuming they one day reach the Premier League, the club may also find that local ‘away’ fans wanting to see Spartak or CSKA Moscow outnumber those supporting the local team. 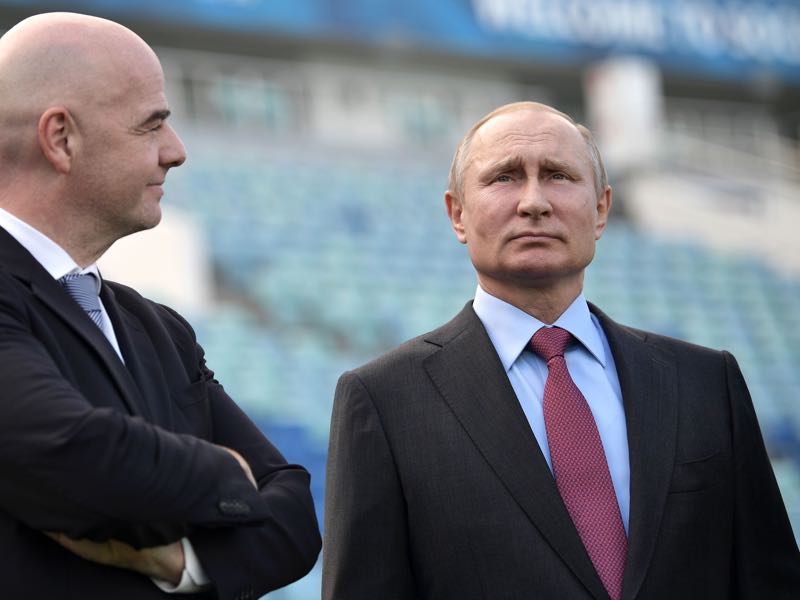 As things stand, though, all of this is immaterial. Dinamo have gone again; their hard-fought win over Zenit in the 2017-18 Russian Cup might be the last ever St. Petersburg derby. Nobody outside several hundred fans and those concerned about losing history seems to care much; it’s anyone’s guess when (or if) Dinamo will be back. If there is a swift return, four post-Soviet incarnations already does not give confidence that a fifth would work out. St. Petersburg just doesn’t seem cut out for having two football teams (the other ‘big’ city club, Lokomotiv, slipped out of professional football in 2000 and shows no sign of returning).

In a couple of years, FC Sochi may well play Zenit in a Premier League tie at the Fisht Stadium, followed by a reverse tie at the equally well-appointed St. Petersburg Stadium. On one level this is progress – these high-quality arenas are now commonplace in Russia but were almost unheard of at the turn of the century. However, interwoven with this story is another problem that shows no sign of going away. Yet another Russian football club has vanished; the rollercoaster ride typical of many outside the elite few clubs continues…