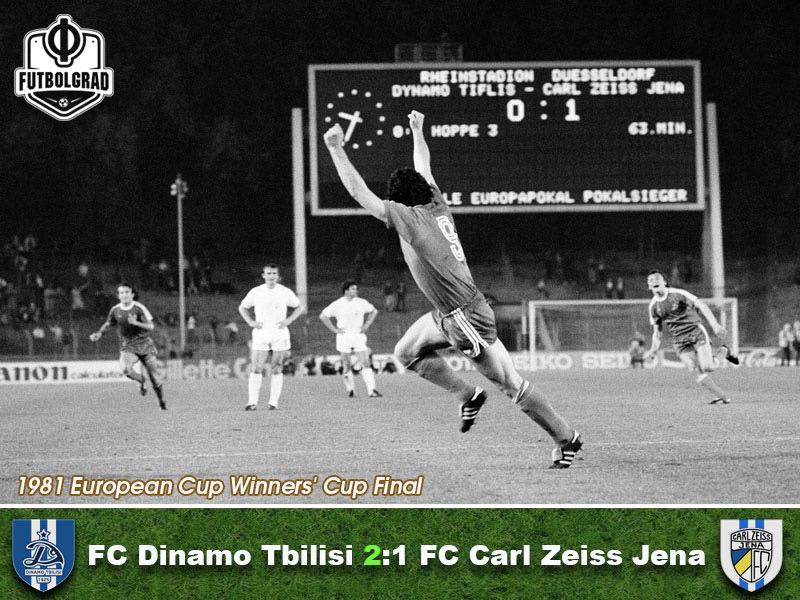 In a new series, we explore some of the most significant games involving Soviet and post-Soviet teams in European competitions. First up we take a look at the UEFA Cup Winners’ Cup final Dinamo Tbilisi vs Carl Zeiss Jena.

Let us put this game into context. This was the 1980s, and it was not too familiar for two sides from behind the Iron Curtain to reach the later stages of an international competition. With the globalisation and centralisation of world talent on a few top clubs, it would be impossible to imagine Dinamo Tbilisi and Carl Zeiss Jena reaching the final of a prestigious European tournament. Furthermore, in a world before Twitter and Facebook, it would be hard to imagine that these two teams were relatively unknown to most neutral observers.

One can only imagine the modern football hipster galvanising over the limitless talent of Georgian playmaker David Kipiani, striker Ramaz Shengelia or the tactical abilities of Carl Zeiss Jena defender Lothar Kurbjuweit. All three were stars in their respective teams, as much as the term existed in communist space of the Soviet Union and the German Democratic Republic.

Kipiani and Shengelia were part of a Dinamo Tbilisi side that dazzled spectators in the Soviet Union. Regularly playing in front of a sold-out Lenin Dinamo Stadium in Tbilisi the club, and its players were the pride of the Georgian Soviet Socialist Republic. Youtube videos from the era highlight the roar that accompanied every Dinamo home game.

It must have been a shock for teams from abroad to enter the arena in Tbilisi being greeted by 80,000 fans ready to fire their team on. Not surprising Dinamo only lost once on the road to the final: 0-1 against West Ham United after a 4-1 victory in England. Kastoria (2-0), Waterford (4-0) and Feyenoord (3-0) were all dispatched at home.

Carl Zeiss Jena in the meantime were a much smaller side in context. A small university town in Thuringia the club was the company club of the Carl-Zeiss optical lenses factory that has its home in the city. Playing at the 12,500 capacity Ernst-Abbe-Sportfeld, one of the few stadiums in Germany that had a wooden stand, the club never could rely on the frenetic support of an entire nation. That makes their road to the final even more impressive as Jena eliminated the likes of Roma, Valencia, Newport County and Benfica to reach the final at Düsseldorf’s Rheinstadion.

Unlike the UEFA Cup, the UEFA Cup Winners’ Cup was played as a one-off final at a neutral venue. With both clubs having to travel to Düsseldorf from behind the curtain ticket remained somewhat of a problem. In the end, just 4,750 people attended the match with most of the visitors constituting political cadres from the respective communist regimes.

Selected as one of ten most important European games involving post-Soviet clubs by the Futbolgrad Network it is a shame that the game did not gain more attention. One can only imagine football hipsters descending on the game if it would take place in 2017. But back in 1981, there was no football hipster movement, and instead, Düsseldorfers simply regarded the game as a match between two communist powers.

It is a shame really because the game included two sides that knew how to play football. Dinamo Tbilisi took the lead in the 63’ minute when Gerhard Hoppe received a fantastic cross inside the penalty box from Jürgen Raab. Hoppe started the play himself when he won the ball on his penalty box, quickly playing the ball forward Raab managed to cross the ball inside the box. Hoppe, however, had run too far and had to use his heel to get the ball onto the goal and to the surprise of Dinamo goalkeeper, Otar Gabelia hit the roof of the net to give Carl Zeiss the lead.

Dinamo Tbilisi, however, hit back right away—combining their way forward Vladimir Gutsaev received a low ball inside the penalty box after a beautiful pass from Ramaz Shengelia. The striker with the number 9 only took split second to decide what to do with the ball hammering it low on Carl Zeiss Jena’s goal the drive beat Hans-Ulrich Grapenthin on the short corner. The match was tied and the Soviet side slowly, but surely gained the upper hand showing that they were playing in one of the most difficult competitions in Europe.

Carl Zeiss Jena hung on, but with just a few minutes left Dinamo Tbilisi found the winning goal. Midfielder Vitaly Daraselia received a ball in midfield marching forward you could see him lift his head on several occasions looking for a passing option, but no-one was available, and he, therefore, opted to run forward. Tangling through several Jena defenders, Daraselia did it all by himself scoring the winner for Dinamo Tbilisi.

Dinamo Tbilisi vs Carl Zeiss Jena – Man of the Match

It was a fantastic match and picking a man of the game on this occasion is difficult. The title, therefore, goes to the goal scorer of the game-winning goal Vitaly Daraselia. Born to a Georgian father and an Abkhaz mother Daraselia spent his entire career at Dinamo Tbilisi. Sadly the year after scoring the game-winning goal in the UEFA Cup Winners’ Cup Daraselia died in a car crash just a few months after participating in his only World Cup. 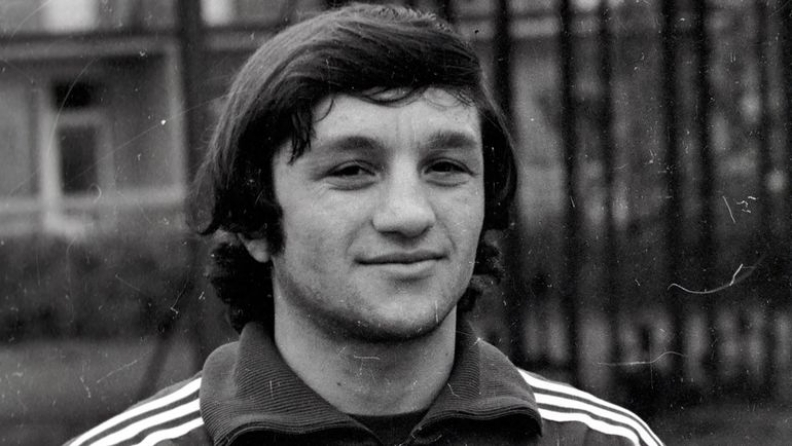 Dinamo Tbilisi vs Carl Zeiss Jena – Vitaly Darselia was the man of the match. (Image Sportall.GE)

Attendance numbers remain a talking point to the present day. Some believe the actual attendance was 9,000. Others insist the attendance was just 4,750. Officially it was the least attended European cup final in history. At the same time pictures and videos from the time suggest that there were more fans in attendance than what UEFA communicated. Also despite the huge distance between Düsseldorf and Tbilisi and the travel restrictions placed on Soviet citizens it is also apparent that there were several fan groups of both teams in the stands.

Dinamo Tbilisi vs Carl Zeiss Jena – Where are they now?

The fall of communism has hit both teams hard. Dinamo Tbilisi play in the now independent Georgian Erovnuli Liga. The Futbolgrad Network has been present at some of Dinamo Tbilisi’s home games in recent years, and the attendance has dropped from several tens of thousands going to games to just a couple thousand that almost seem lost in the gigantic bowl of the Dinamo Arena.

Carl Zeiss Jena in the meantime were promoted to Liga 3 at the beginning of the season. With the help of investor Roland Duchatelet, Carl Zeiss Jena have an ambitious project to return to the upper levels of German football. Now playing in the highly competitive Liga 3 Jena are currently in the middle of the table and look good to stay in the league this season.