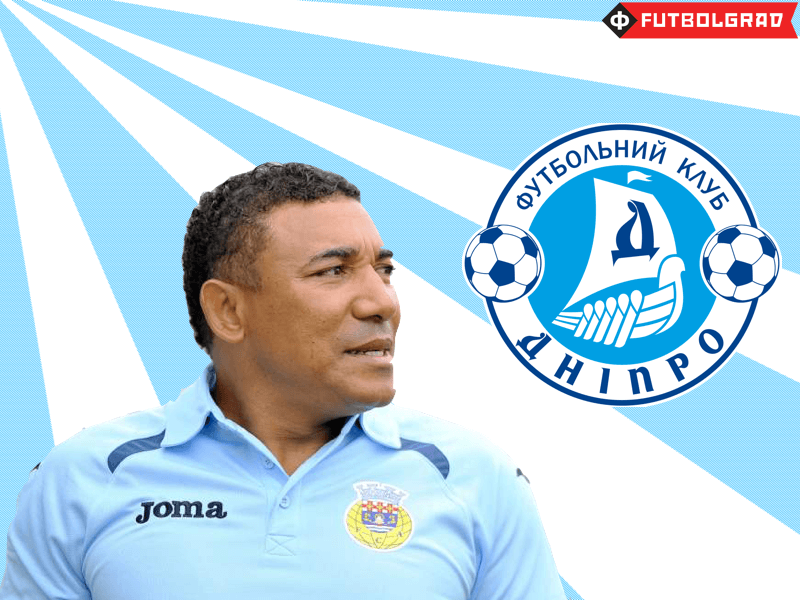 On the eve of Dnipro Dnipropetrovsk’s derby against Metalist Kharkiv (read about that match here) rumours have emerged that Dnipro have approached the Angolan coach Lito Vidigal to take over as manager of Dnipro in the new season. Dnipro has been banned from the Europa League next season, and as a result current head coach Myron Markevych has announced that he will leave Dnipropetrovsk at the end of the season—he has been linked with a job at Galatasaray.

The Portuguese paper A Bola reported on April 13 that Dnipro’s management had met with Vidigal last weekend, and discussed the possibility of the Angolan to take over the job in Dnipropetrovsk. Vidigal is under contract until 2019 at Arouca, and club officials have told A Bola that Dnipro has not approached them about the availability of the coach.

FC Arouca—a small club from the Porto metropolitan area—have been performing above expectations in the Primeira Liga this season. With just five games remaining the club are currently fifth, which puts them on course to qualify for the third round of the Europa League next season.

Futbolgrad spoke to Tom Kundert from PortuGoal.net about Vidigal. “He has done superbly at his last two clubs, saving Belenenses [Lisbon] from what looked liked certain relegation then completely overachieving at a very small club, Arouca.” Kundert explained.

According to Kundert, Vidigal is the sort of coach that can inspire a squad of unknown players as he “Gets 100% commitment from his players. Not particularly eye-catching football, more attritional you can describe it as, but not much choice given the players he has had at his disposal.”

This attribute would most likely serve Vidigal well if he were to take the job in Dnipropetrovsk given the fact that Dnipro will most likely have to rebuild the team next season, as it is expected that most top players will follow Markevych’s example and leave the club.

Furthermore, Kundert believes that Vidigal will be aware that he has reached the end of the line at Arouca, as it will be unlikely for him to improve a small club such as Arouca. Kundert believes that there are currently at least 10 clubs in Portugal which would be a step above Arouca, but also points out that Vidigal has not proven himself at a big club yet. “It’s the old story though. Can a coach who gets minnows overachieving do the same when expectations are higher? Like I said, he seems to be skilled at getting his message across and getting players on side, so that bodes well.”

But Kundert also pointed out that only the top three clubs in Portugal—Benfica Lisbon, Sporting Lisbon, and FC Porto—could compete financially with Dnipro Dnipropetrovsk, “and I don’t think the Big 3 will go for him at this point.”

Dnipro’s owner Ihor Kolomoyskyi certainly has the cash to outbid even the big three clubs in Portugal. At the same time Kolomoyskyi has been reluctant to finance his club this season, yet his relationship with the club has been hot and cold in the past, with long months of high spending followed with bouts where he has completely ignored his financial obligations. Kolomoyskyi’s mood swings, even if he does decide to now open his purse strings, could therefore make it hard to pursue a coach like Vidigal, as in the long term the Angolan would surely like to lead a club that can compete for trophies.