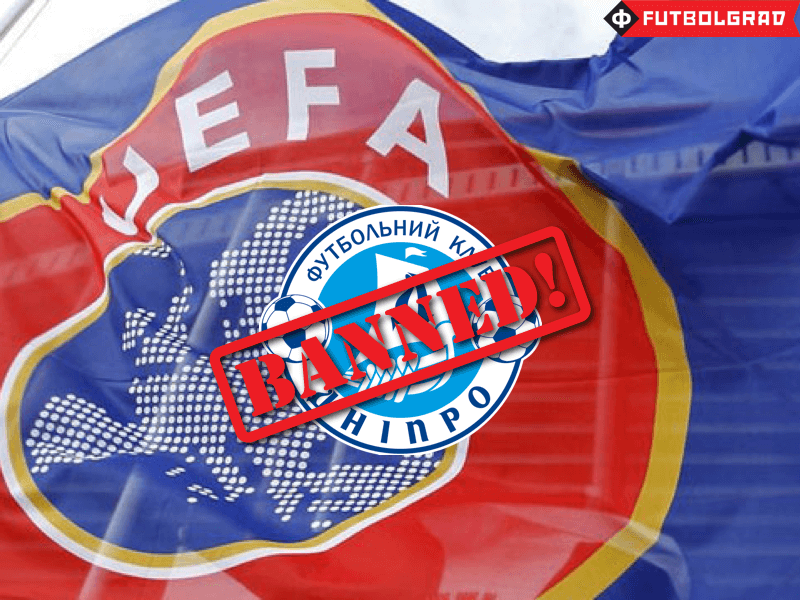 As was widely expected, earlier this week UEFA officially excluded Dnipro Dnipropetrovsk from the next European club competition for which the club qualifies. Last year’s Europa League finalists have been punished for failing to clear debts owed to the staff of former manager Juande Ramos.

Other than two impressive victories over Shakhtar Donetsk, Dnipro’s season has been disastrous. They were knocked out of the Europa League in the group stage and have dropped out of the top three in the Ukrainian Premier League. Summer departures of Yevhen Konoplyanka, Jaba Kankava, and Nikola Kalinić were not adequately replaced, and in the winter transfer window Yevhen Seleznyov, Valeriy Fedorchuk, and Denys Boyko also left the club.

Moreover, Dnipro are in serious financial difficulties and many players have not been paid in months. In fact, when Yevhen Seleznyov controversially moved to the Russian side Kuban Krasnodar in February, he agreed to forgive the wages owed to him in return for being allowed to leave on a free transfer. The European ban has just added to Dnipro’s misery, which is unlikely to end anytime soon.

Manager Myron Markevych wanted to leave the club in the summer following a disappointing transfer campaign, but club owner and president Ihor Kolomoyskyi did not accept his resignation. With the club now excluded from European competition, Markevych is determined to move elsewhere. “To be honest I did not expect such a situation, but now that it has emerged it makes no sense for me to start next season with the team,” he told the television channel Futbol.

The outlook for the players’ futures does not look much more promising. The contracts of eleven Dnipro players are expiring this summer, but thus far there has been no talk of contract extensions.

“No one has told us anything yet,” midfield Roman Bezus told Matchday. “I think all the players will finish the season, and after that something will be decided.”

Despite not being paid, the players that have stayed at the club have no intention of giving up. According to right back Artem Fedetskyi, he and his teammates have set third place as their objective, even if this season it will not lead to a spot in the Europa League.

Dnipro’s ban has now all but ensured that Zorya Luhansk, currently in third place, will take part in the Europa League group stages next season. The clubs immediately below Dnipro in the table—Vorskla and Oleksandriya—now also have an excellent opportunity to take part in European competition.

As for Dnipro, there is still a risk of more punishment to come. Serhiy Zadiran, the chairman of the administrative unit for the certification of football clubs of the Football Federation of Ukraine, revealed on Friday that the debts have not been written off and that if Dnipro refuse to pay, additional sanctions may be assigned.

With the likely departure of Markevych and much of the squad, Dnipro’s prospects look grim. There has been speculation that Kolomoyskyi is looking to sell the club, which could be the best possible scenario, but so far these are unsubstantiated rumors. If Kolomoyskyi remains unwilling to devote any resources to Dnipro then the worst-case scenario—the liquidation of the club—is a frightening possibility.