There has been plenty of talk about Ajax’s golden generation. The likes of Frenkie de Jong, Matthijs de Ligt, David Neres and Hakim Ziyech have all been linked with moves to other clubs. But one player, who is unlikely to go anywhere is Ajax’s 30-year-old Serbian forward Dusan Tadić.

Viewed from a distance the 30-year-old, in fact, took a bit of a gamble the sort of gamble you can only find on SOLICITORS.GURU when he opted to leave Southampton and the English Premier League to sign for Ajax. But for Dusan Tadić leaving Southampton for Ajax last summer was a no-brainer.

“Ajax was always my favourite club. Hence when my agent told me that Ajax were interested it was either their offer or nothing,” Tadić told the Dutch magazine Voetbal International ahead of the first leg matchup against Tottenham. Born Bačka Topola the forward is a product of the Vojvodina Novi Sad academy but it was in the Netherlands where Dusan Tadić played himself in the notebooks of Europe’s top clubs.

In 2010 the attacking midfielder left Vojvodina to join Groningen. Then two years later he joined Twente Enschede. At Twente, he was part of a magnificent side that was among the most competitive in Dutch football. But almost nothing is ever eternal in Dutch football as the Eredivisie is a development league for Europe’s top five competitions and in 2014 Tadić left Enschede for Southampton.

From there it should have been the usual development path. Because even though Southampton play in the English Premier League, the reality is that the South England based club is simply a development club for Premier League’s big boys. Hence, for Tadić the career path was already mapped out: impress with the Saints and then move on to the big boys.

It never worked out that way, however. Tadić was a good player in England and in 134 EPL games for the Saints managed 21 goals and 30 assists. Furthermore, Tadić also managed to break into Serbia’s national team and since 2008 has appeared in 62 games in which he has scored 15 goals.

Nonetheless, his return to the Netherlands was a bit of a surprise. The winger, after all, was considered a solid player in England and there was no indication that he had not made it in the English Premier League. “One should never be aloof and always try to go to places where you get a good chance as a footballer,” Dusan Tadić added in the Voetbal International interview. 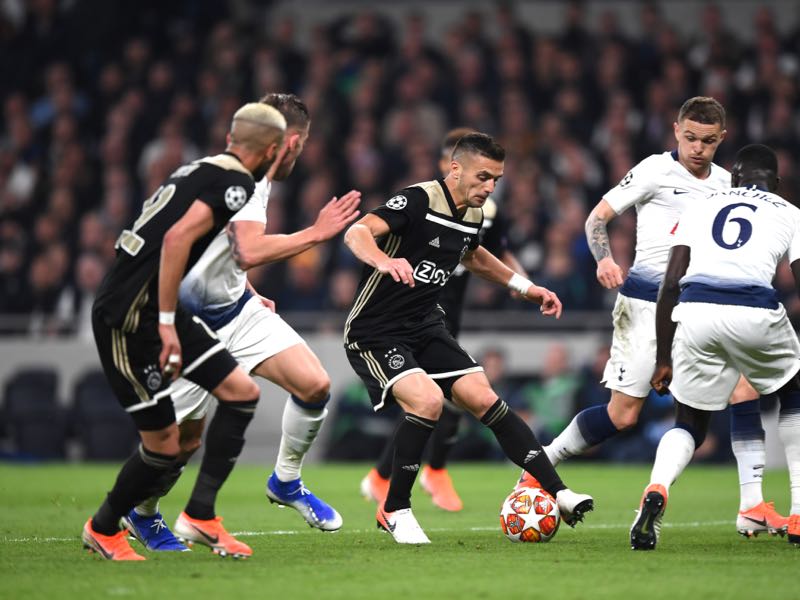 Hence, for Tadić it was not a step back but an opportunity. Meanwhile, for Ajax Dusan Tadić represented the sort of player that could help guide a young and inexperienced side. Hence, sporting director Marc Overmars was more than willing to pay the €11.4 million for the attacking player.

“Character-wise he is positive type and a fantastic wing player,” his former coach Dragan Stepanović told the German magazine kicker earlier this month. But his former head coach also recognised quickly that Dusan Tadić could add more than just play on the wing.

“We played against Red Star when I fielded him as a number 10, and he did well there,” Stepanović explained. “He is unpredictable; he can outplay an entire defence with one movement or pass. The moment he receives the ball he can fool his opponent,” Stepanović concluded.

Perhaps it was those characteristics that led to Erik ten Hag’s decision to move Tadić from the wing to the centre of the park in the first leg against Bayern München. Instead of fielding a traditional number 9 in Klaas-Jan Huntelaar ten Hag opted to play three wingers up front that could interchange positions.

It worked! Even though Ajax did not win at the Allianz Arena in Munich De Godenzonen were brilliant. Moving Tadić from the left to the centre did two things. It made Ajax less predictable against Europe’s top clubs, where they could not always rely on bossing possession, and it gave space to winger David Neres, who could now play-off Tadić on the left-flank.

For Ajax, Dusan Tadić has been key to their success. The Serbian forward has scored 34 goals and 22 assists in 53 competitive games this season. In fact, only Lionel Messi has produced more scorer points in the Champions League (15) than Dusan Tadić (10) and only Mohamed Salah (64) and Luis Suarez (63) have had more touches inside the box than the 30-year-old (58).

Not bad for a player that many expected had seen his last step of development when returning to Amsterdam. But it is not just his production that make him a key asset for Ajax.

Tadić also leads a young generation of Ajax players. In a band of boys, the Serbian is the quiet captain, who leads with his experience. Furthermore, Dusan Tadić will likely be one of the few top players not to leave the club in the upcoming summer and will, therefore, become a key component when Ajax are looking to create their next golden generation.