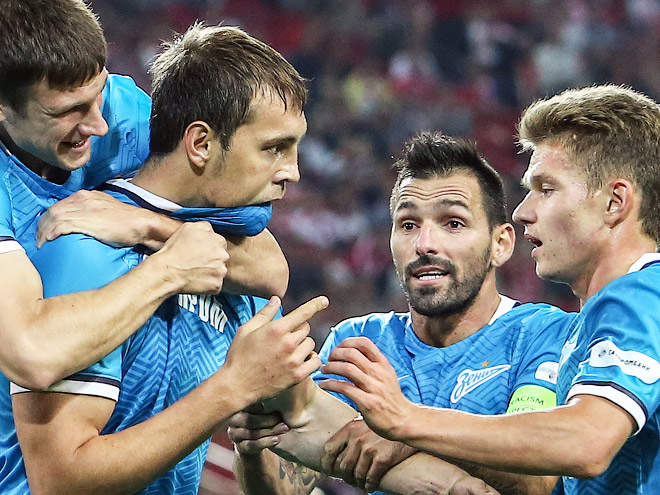 Dzyuba Goal Adds Another Chapter to the Spartak vs. Zenit Drama

This weekend another anecdote was added to Artyom Dzyuba’s controversial free agent move from Spartak Moscow to Zenit Saint Petersburg, which was concluded this summer. Dzyuba played for Spartak Moscow last season, and Spartak tried hard to sign the 196cm tall striker to a new deal. Instead, Dzyuba refused Spartak’s offer and penned a free-agent contract at Zenit, in what has been reported to be a deal worth $3.5 million a year.

Spartak’s management was furious with Dzyuba’s decision, and consequently loaned Dzyuba to relegation candidate FK Rostov. Spartak’s board felt that with Dzyuba leaving the club in the summer it would be impossible to continue a working relationship with him. This was Dzyuba’s second loan spell at FK Rostov. He had previously been loaned out to Rostov in 2013-14, in what proved to be Dzyuba’s breakout season, when he scored 17 goals in 28 games. The season changed the trajectory of his career for the better. Then last winter Dzyuba was sent back to the club to sit out the remainder of his contract in exile at the Don (Rostov’s major river).

In Rostov, Dzyuba was able to help the club to fight off relegation to the First National League (FNL), but at the same time the club was unable to pay the players wages for months. A September 10 hearing between Rostov and Dzyuba forced Rostov to pay their debt to Dzyuba which increased the club’s financial problems, and added to the story of Dzyuba’s strange transfer from Spartak to Zenit.

The transfer was finally concluded on July 1 when Dzyuba’s contract at Zenit kicked in. For Zenit, adding Dzyuba meant that the club was able to add a highly talented Russian striker to the squad, an important element, when one takes into account the new 6+5 rule, which limits the number of foreigners who can play at any one time during league matches in the Russian Football Premier League (RFPL).

Dzyuba has scored three goals in ten matches so far this season, the most important, a goal against Spartak Moscow at the Otkritie Arena on Saturday.

In fact Dzyuba’s appearance in the battle between Spartak and Zenit was one of the hottest topics that surrounded what was already considered one of the most heated matches in Russia. During the match, it was Dzyuba who equalised for Zenit in the 87th minute and broke the heart of his former club. Spartak’s owner Leonid Fedun was asked after the match whether he regretted that Dzyuba now plays for Zenit rather than Spartak, to which Fedun simply answered, “He did not show much in the match. In fact Dzyuba’s goal was a mistake—the goal should have been waved off, as it was clearly offside. Also if you compare him [Dzyuba] to Zé Luís you have to say that our forward [Zé Luís] has more quality and only receives a third of [Dzyuba’s] salary.”

Dzyuba, meanwhile had the last laugh when he scored the tying goal in the match, and destroyed Spartak’s dream of winning the battle between Russia’s most important cities. He was also able to silence Spartak’s fans that had spent the entire game throwing insults at their former striker. Speaking to championat.ru Dzyuba stated, “I wanted justice in this life, and I am extremely happy. In any case, for me it was a test.”

When Dzyuba was asked about the abuse that he received from Spartak fans during the game he answered, “It is their right. But they do not know the whole truth [about the transfer]. But the time will come, and someday I will tell all the details. The fans shout abuses without knowing all the details. Hence, I do not blame them, and I am not angry.” It therefore appears that Dzyuba’s first goal against Spartak is not the conclusion of the transfer saga, but rather the beginning of yet another chapter in the drama between Spartak and Dzyuba.