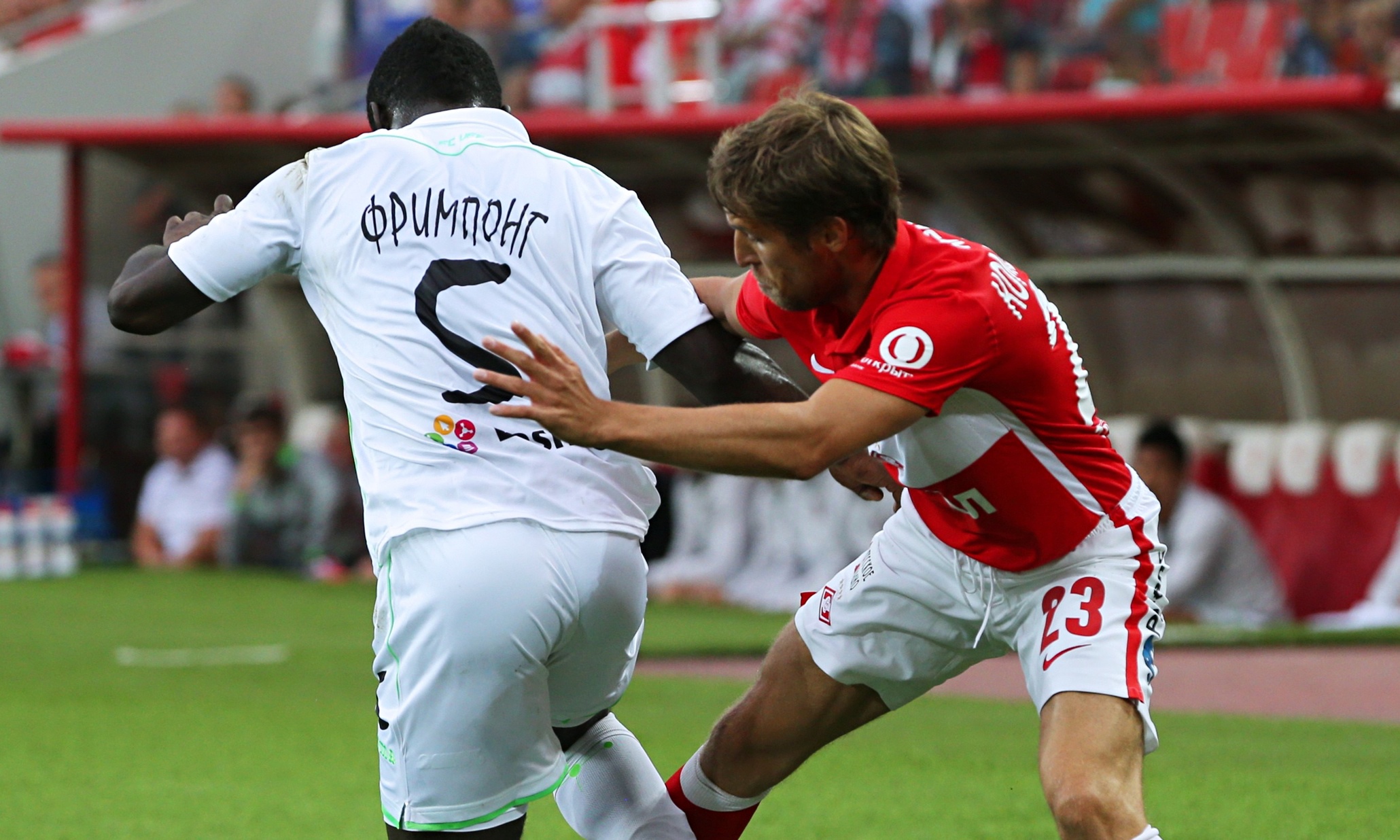 Emmanuel Frimpong – The Fall Out

Last week FIFA requested details of the ‘Frimpong incident’ (more on the story here), and on Tuesday the Russian Football Union (RFU) sent these to them. Their contents were not revealed—which is understandable—though one can probably hazard a guess. Officially at least it seems there was no racist incident, and if there was then it was part of a worldwide problem.

A week after the original incident took place Sergey Pryadkin, President of the Russian Football Premier League, announced his organisation’s findings: “The ‘Football Family’ sector is right above that area Frimpong showed his gesture to. I can say with confidence that nobody in that sector heard any monkey noises directed towards Frimpong from the fan sector. I don’t know what the conflict between Frimpong and the fans was about—if there was a conflict at all—but there were definitely no monkey noises.”

This followed a comment made by the RFPL’s director of security, Aleksandr Meitin: “I was right next to that place but didn’t hear any shouting or racist chanting directed at Frimpong. We have watched all the video footage from the stadium…and there are no gestures.”

Minister of Sport Vitaliy Mutko said: “Racism in football is a problem not just for Russia. We will strengthen our fight with it. Our sanctions for these things have already been toughened. The position of match inspector will be created, who will focus only on investigating the problems of racism at games. Offenders will be punished.”

On Twitter Frimpong himself described it as “beyond a joke” that officials found no evidence of racism. You can judge for yourself by watching a clip of the incident: https://youtu.be/fGag4jLniBE.

What about fans’ views? There were many comments on championat.com relating to each of the statements, and below is a translated sample that I feel is representative:

Everyone could hear the monkey chants during the live transmission of the match.

Even on video loud and mass monkey chanting is clearly heard. But Meitin can’t hear it. They’ll take the World Cup from us and it will be completely justified.

They didn’t want to find any evidence and so they didn’t.

I see – it was all a hallucination.

I support Spartak, but looking at it objectively it’s clear to everyone there were monkey noises. Another matter is that now we need to put an end to it.

Even on video it’s audible, though not very clearly. In France after the PSG v Chelsea match someone was punished for not letting a black bloke into a metro carriage, but here…. here just like always – we didn’t see anything, we didn’t hear anything.

Maybe they [Pryadkin/Meitin] are right. Moreover, some people heard congratulatory calls of “Bravo, Emmanuel!” from the stand and chants of “Well done! Well done!” After the match a few people waited behind with flowers so they could congratulate the footballer. Why he acted as he did on this background is unclear to all of us.

Typical answer from a Russian civil servant. I wonder if he knows he’s lying or whether it happens instinctively?

I get it – NTV’s [TV channel showing game] commentator made the monkey noises, and Frimpong showed his middle finger just because he’s nasty.

It would be interesting to try and find one worthy journalist during a press conference who would ask a question about this monkey chanting, and switch on a recording of such a moment right in front of this official who didn’t see or hear anything.

Of course there were no noises – because it was Spartak fans. If it were another non-Moscow team then there would be a stadium ban, at least in the fans’ sector. Those are the double standards we have.

Next time Frimpong should show his middle finger to Meitin.

The stewards were also questioned, and they too didn’t hear or see anything. So why do we need them?

I’d like to remind everyone that Aleksandr Meitin was security director at Spartak Moscow from 2001-2004.

There was nothing there. Even if the Spartak fans made monkey noises Frimpong had no right to demonstrate the specifics of his upbringing by raising his middle finger.

This racism hysteria is getting on my nerves. It feels as if people in Russia have been infected by this, and instead of responding rationally panic begins – ‘we might lose the World Cup’, ‘there is no racism’ etc., etc., as if we are zombies.

Frimpong made it all up – that much is clear. His disqualification was too short – it should have been five matches.

Pingpong has been sent to us! It’s obviously political! The English are upset about 2018! Provocateur.

So why is the Frimpong incident being ignored [if the fight against racism is getting tougher]? Spartak should have been punished, including being deducted points.

Mutko, commenting on the Frimpong incident, as usual doesn’t comment on anything.

So fans can provoke African footballers by making monkey gestures, and if the player reacts he gets a red card. I suggest all fans start monkey chanting at opponents from now on, because apparently it’s not racism.

We need a committee to fight racism. I see no other answer.

He should start with his home town [Saint Petersburg] – where there is no black in their colours. [reference to a slogan that has been used by some Zenit fans – ‘There’s no black in Zenit’s colours’]

For starters, just like in the Champions League, use the slogan ‘no to racism’ at matches.

Racism against dark-skinned people in Russia has been artificially made into a big issue. There is not one reason for hatred towards them – this is just a sad attempt to be like the rest of Europe.

I don’t understand – where did they see racism? Has even one black person suffered from racism? Racism is when your rights are curtailed or you suffer physical violence due to your race. What racism is there here?

So how can these comments be summarised? There’s certainly a lot of weariness with the official reaction, which manifests itself either in frustration or irony. This seems to be the majority view. There are also many Russians who deny that there is a problem, and some even claim that there is a Western plot behind individual incidents, and the changing mood in Russia towards racism.

Perhaps most striking is the feeling that fans really want action, and that a number seem to have good ideas about what to do. Perhaps the above suggestion of a committee is the way forwards, as long as it contains fans with sensible ideas, and will bring forward real change.