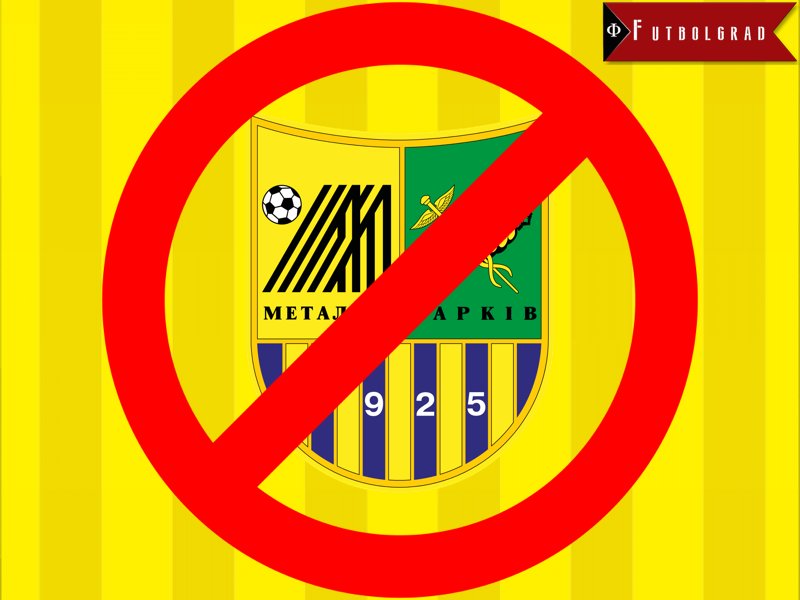 The End of Metalist Kharkiv

Former Metalist Kharkiv owner, and billionaire, Oleksandr Yaroslavsky has told the Ukrainian television station 2+2 on Sunday that he is now ready to return to football. The Ukrainian oligarch sold Metalist in the winter of 2012 to the previously unknown businessman Sergey Kurchenko.

Yaroslavsky was always understood to be a big fan of the club, and many in Ukraine believed that Kurchenko was in reality not the real owner of the club, but rather a frontman for a consortium that had its origin in the Ukrainian government around former President Viktor Yanukovych.

Yaroslavsky “Was Given an Offer that he Couldn’t Refuse”

At the time of the sale Yaroslavsky stated he “was given an offer that he couldn’t refuse.” Yaroslavsky was, at that particular time, at odds with Kharkiv’s authorities over property rights concerning the Metalist stadium. It was therefore suspected that Yaroslavsky had a fall out with Ukraine’s political elite, and that the fight over property rights was a way of putting personal pressure on Yaroslavsky to remove him from the public sphere.

This theory is supported by the fact that following Yanukovych’s disposal after the 2014 Maidan Revolution, Kurchenko’s assets were frozen, and the businessman was forced to flee Ukraine—it is believed that he is now hiding in either Moscow or Belarus. But despite leaving the country Kurchenko managed to sustain ownership over Metalist. 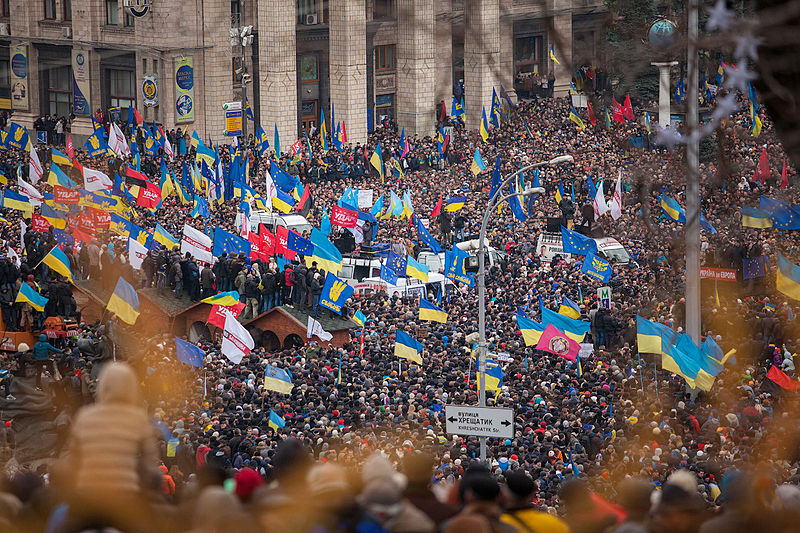 In his absence, however, the club accumulated massive debts, and with Kurchenko in exile, and his accounts frozen, nobody was available to pay the bills. Following the revolution, and Kurchenko’s extended holiday abroad, there were repeated rumours that Yaroslavsky could take over the club. But neither the city authorities, who were footing the bill for the stadium, nor the former owner were able to attain the legal rights of the club.

In the absence of financial contributions Metalist debts only increased Furthermore, many players, who hadn’t had their salaries paid in months resorted to illegal activities in order to obtain an income. On April 19 Futbolgrad reported that Metalist suspended the entire first team from the club, and finished the Ukrainian Premier League season with its second team, after the club was hit with a massive match fixing scandal.

Metalist Kharkiv was once a Club of Ambition

This was believed to be a new low for a club, which once had ambitions to dethrone both Shakhtar Donetsk and Dynamo Kyiv at the top of the Ukrainian Premier League.

Yet rock bottom had not been reached at this point, as the club still hoped to maintain its position in the Ukrainian Premier League. But even the Football Federation of Ukraine, which isn’t above granting clubs with terrible finances licences, couldn’t overlook the mounting debt, and the match-fixing scandal, and on April 22 the club had its 2016-17 Ukrainian Premier League licence revoked. The club then moved in front of the arbitration court of the FFU, but on May 18 the FFU remained steadfast on the decision to not grant Metalist a licence.

This meant that Metalist would have to either be relegated to the Persha Liga (the second division) or be dissolved, which has been the more likely scenario given the lack of money.

Save Metalist initiatives sprang up throughout the country, and a poster could even be seen during the 2015-16 Ukrainian Cup final. Fans also lit flares in Kharkiv’s town centre in order to demonstrate for the future of the club. The demonstration was followed by Yaroslavsky’s television interview.

Amidst all this confusion Kurchenko gave a strange interview to football.ua in which he stated that the had invested more than $270 million since purchasing the club, further stating that his “investment has helped the club to reach a new level in Ukrainian football.”

When asked about the financial problems, and the match fixing Kurchenko responded, “politics and corruption have entered the sport. What is happening with Metalist is the result of the former club owner; the old rogue Oleksandr Yaroslavsky, acting in collusion with the FFU, to prevent the certification of the club. By their actions, Yaroslavsky and the FFU will cause irreparable damage to both the entire sport, Ukraine, and the city of Kharkiv.” In light of the events that have taken place since Kurchenko has taken over the club, however, it would be safe to say that the current owner is out of touch with reality. 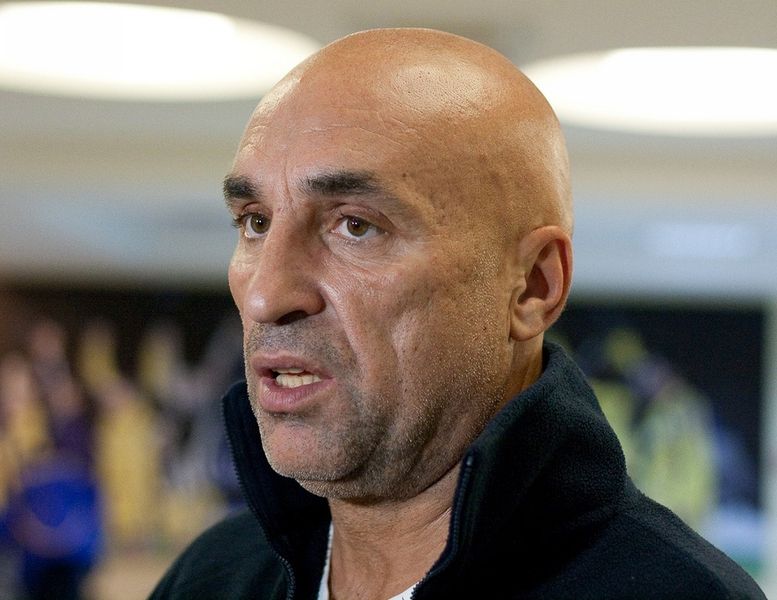 Kurchenko’s interview was among the things that were addressed in Yaroslavsky’s interview with 2+2. Asked about Kurchenko, Yaroslavsky stated, “Have you read his statement? This lack of respect is astonishing. Although it is not surprising given his lack of education.” Yaroslavsky also addressed the fact that Kurchenko seemed to have appeared out of nowhere to purchase the club “I have seen him twice in my life, and I still don’t know whether his name is Kurochkin or Kurchenko. Let him read statements…”

Yaroslavsky also addressed the takeover of his club. “He thought he would wear the Metalist scarf that I created. He thought he could sit in the stadium, which I built. That I will invite all my friends, and that they will join him, and that all will be well. But it just doesn’t happen that way.” This last statement suggests that the new ownership hoped to benefit from owning the club by the connections it would grant to Kharkiv’s economic and political elite.

Finally Yaroslavsky addressed his own future in football, and the future of football in Kharkiv. “The soul hurts, but the owner also said that he would not give anyone the club. Metalist doesn’t exist anymore. But we have to think about football, and what a [potential future] club would be called. As there will be no Metalist there will be another club. I am ready to think about it. I just can’t promise anything, as Metalist’s corpse is still warm.”

Metalist Kharkiv will be Condemned to the Dustbin of History

Metalist in its current form therefore seems to be condemned to the dustbin of history, as a newly formed entity could not use the name and rights of the Metalist as long as Kurchenko holds them. Furthermore Yaroslavsky believes that the formation of a new legal entity will be the best way to preserve top class football in Kharkiv.

There are countless examples of clubs that had to be re-founded without owning the names and trophies of the old club. In England, AFC Wimbledon was founded in 2002 to replace Wimbledon FC, which was moved to Milton Keynes. Fan groups of Austria Salzburg founded a new club after the club was taken over by Red Bull and subsequently renamed as Red Bull Salzburg. In Italy film producer Aurelio De Laurentiis registered a new club, Napoli Soccer, following the bankruptcy of SSC Napoli in August 2004. The club didn’t regain its official name Società Sportiva Calcio Napoli until 2006 when the Laurentiis was able to negotiate a deal with the creditors for the rights of the club’s crest and the name. 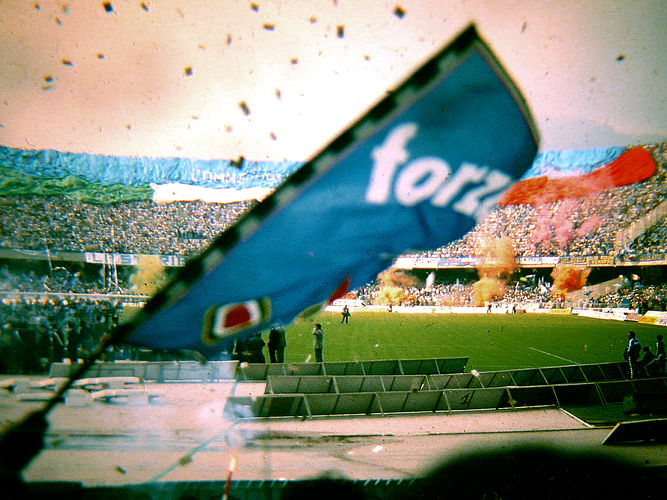 The example of SSC Napoli shows, Metalist Kharkiv would not be the first club the be re-founded as a new entity – Image via Pino Alpino

The example of SSC Napoli could now be followed in Kharkiv, as Yaroslavsky might simply register a new football entity under a new name in the city. Yet Yaroslavsky is adamant that he won’t be able to do this on his own. “I am not the only person who has money in Kharkiv. We have so many guys with money. Where are they? I am not ready to do this on my own.”

Finally Yaroslavsky also appealed at the fans and the city of Kharkiv. “We must gather the fans, and the powers in the city, and look into each others eyes honestly and say that someone is willing to do this, and that that person will receive guarantees.”

For the city this means that there is now hope that top class football could indeed continue in Ukraine’s second largest city. The name Metalist, however, seems to have disappeared along with Kurchenko into exile.