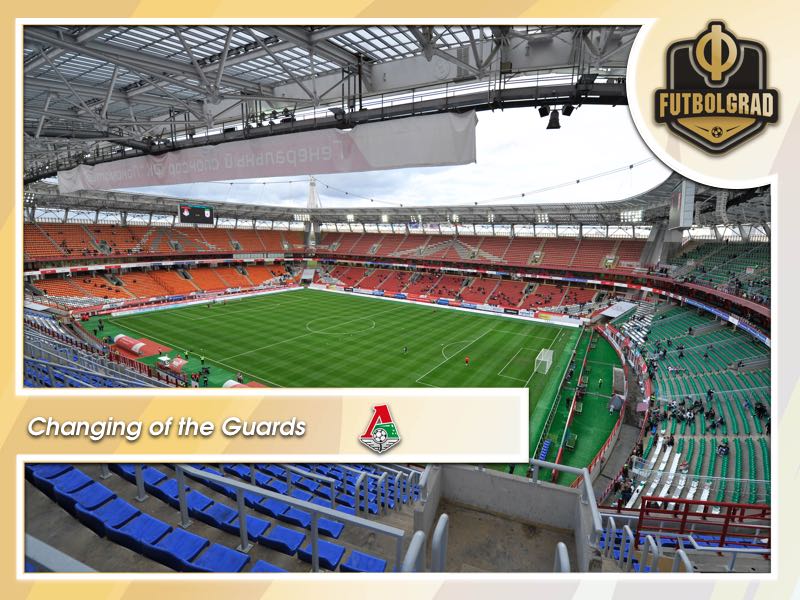 Erik Stoffelshaus – A Changing Of The Guards At Lokomotiv?

Just ahead of the New Year Erik Stoffelshaus gave an interview with the German magazine kicker. The topics among others were the impact of the 2018 FIFA World Cup on Russia but also live in Russia in general.

“I am impressed on how much Moscovites love this city” and “when Russia organises something this big it will be perfect,” were just two of the positive quotes by Lokomotiv’s sporting director. Already at the time, there were, however, indications that the German could soon leave his post at the Russian champions.

The German magazine admitted this much itself in the very introduction of the interview. Just a few days later on December 28, it had become a fact. Stoffelshaus announced on Instagram that he would be leaving the club with immediate effect.

“Dear friends, after two wonderful years in Moscow, I decided it was time for something new in my life – that’s why I give up my position as the Sporting Director of Lokomotiv Moscow. But not without saying thank you. Thank you for a time that will remain in my memory forever. Celebrating the cup victory and the long-awaited third championship with this club – that was something very special. And one thing is clear: I‘m leaving as the Sporting Director, but I will stay as a supporter of this magnificent club. Thanks for everything and see you soon!”

What is next for Erik Stoffelshaus?

Since then rumours have circulated that the 48-year-old native of Mülheim an der Ruhr has had offers from abroad. Manchester United are one of the clubs that have shown interest in signing the sporting director. Another possible destination could be Schalke were Erik Stoffelshaus has worked in the past and was one of the makers behind the successful Knappenschmiede, which has produced some of Germany’s biggest talents including English Premier League stars Mesut Özil and Leroy Sané.

Following his stint at Schalke, Erik Stoffelshaus worked in Canada where he got to perfect his English, which, in turn, would make him qualified for a job in England.

What would qualify him for either role would be the 48-year-old’s ability to unearth not just young talent but also his ability to sign players that may have dropped off the radar. At Lokomotiv, for example, he was responsible for signing the likes of Jefferson Farfan and Éder. Both played a significant role in Lokomotiv’s championship last season.

At the same time, transfers undertaken this season have somewhat failed to impress. While Grzegorz Krychowiak has at times shown his leadership abilities, defender Benedikt Höwedes has somewhat disappointed, and striker Fedor Smolov, signed for big money from league competitors Krasnodar has been an absolute disaster.

Those signings were supposed to strengthen Lokomotiv’s ambitions in the Champions League. But the Railwaymen failed to impress in the UCL finishing in the last place in a group that included Porto, Schalke and Galatasaray.

Furthermore, the Russian media criticised Erik Stoffelshaus for not making room for young talent by signing only experienced players. They also added that the club mostly ran a deficit in the transfer market during his time as the sporting director at the club. Both criticisms seem harsh, however, given the fact that it is up to the coaching staff to move players through the ranks and that Lokomotiv had performed over expectations during his time at the club.

In the Russian Premier Liga the club, in the meantime, have been right on schedule. Fifth in the standings, six points behind league leaders Zenit, Lokomotiv were never expected to defend the title but with two-thirds of the season played are still in contention to once again qualify for Europe.

Changing of the guards – Good news for Semin?

With this in mind, Erik Stoffelshaus has done an excellent job at a club even if some of the summer transfers have failed to impress – especially when one adds the 2017 Russian Cup win to the collection. But why make the changes now?

On the one hand, there seems to be Stoffelshaus’ desire to move on. But there is also more to the story.

Lokomotiv Moscow have been an odd club for some time now. Although the club have won the Russian Cup in 2017 and the championship in 2018 much of the leadership have been at odds with a strong dividing line between General Director Ilya Gerkus and head coach Yuri Semin.

It has been a power struggle that has seen some success. Sparks and disagreements that led to the club win games and titles. But at the same time it is an environment that makes it difficult to work and it now appears – at least on the surface that Semin has won the power struggle – as General Director Gerkus announced his resignation just before the new year and will be replaced with Vasily Kiknadze.

What does that mean for the future of the club? In general, it appears that Yuri Semin has now won the power struggle at the club. But at the same time with Stoffelshaus and Gerkus gone Semin is now in the spotlight. The head coach can no longer blame poor results on management signing the wrong players for the first team.

It is a changing of the guards that might see the likes of Stoffelshaus move to bigger and better tasks. But it could also spell the end to Semin’s coaching career if Lokomotiv do not improve in the second half of the season.