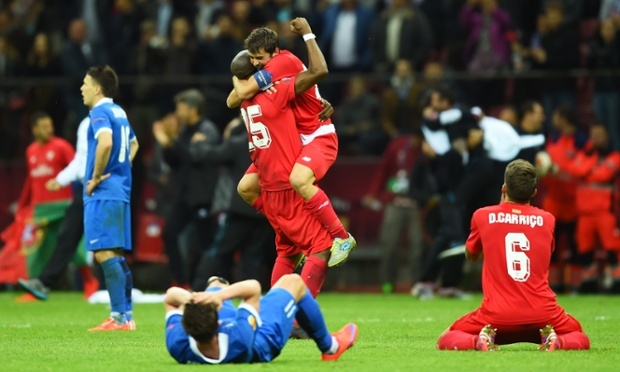 It was always going to be tough for Dnipro Dnipropetrovsk in the Europa League final, and in the end it just wasn’t meant to be. Perhaps the moment that will be most symbolic of the club’s tragic end in the competition was Yevhen Konoplyanka crying at the centre of the pitch surrounded by his teammates, who did their best to console the Ukrainian superstar.

Yet Dnipro can take pride in their Europe League campaign. Branded as the ultimate outsider from the group stage onwards, the club eliminated several big name European clubs including Napoli, Club Brugge, and Ajax Amsterdam, on their route to the final.

While Dnipro receives almost unlimited funds from their billionaire owner Ihor Kolomoyskyi, the circumstances under which the club reached the final have made this story that of a Ukrainian fairy-tale. Banished from their home ground in Dniprepetrovsk the club was forced to play their European home-matches in Ukraine’s capital Kyiv.

It was not until the semi-final return match against Napoli that Kyivans went out to support Dnipro’s march to the final. After all Kyiv’s club Dynamo was carrying the Ukrainian flag until the quarterfinal. With Dynamo gone the NSK Olimpiyskiy finally became a fortress for Dnipro with many Ukrainians, regardless of whether or not they were Dnipro fans, coming out to support Ukraine’s team in the competition.

All of a sudden Dnipro was the symbol of a country that in the last year and a half has faced its biggest crisis since gaining independence from the Soviet Union. While Dnipro carried the burden of representing an entire nation, it did not show this in the final against Seville.

Indeed the 2015 Europa League final will go down as one of the better finals in recent history, as both clubs played open attacking football. But with Sevilla and Dnipro scoring 2 goals each, including a beautiful free-kick goal by Ruslan Rotan in the first 45 minutes, it soon became apparent in the second half that the next goal would decide the match.

In the end it was Sevilla’s Carlos Bacca who ended the final with a beautiful goal with only 17 minutes to spare. It was a blow that Dnipro could not recover from, as Sevilla was simply too clever to let the Ukrainians get back into the game.

As James Masters from CNN put it Dnipro’s aim was “to make Ukraine smile”, and despite not winning the game Ukrainians will be able to take pride in supporting a team that few in European football had on their radar.

The question, however, is what will be left of Dnipro in the new season. The club still has a marginal chance to qualify for next year’s Champions League qualifiers, but will most likely start once again in the Europa League. The club will have to do this without their prolific playmaker Yevhen Konoplyanka, who will leave the club as a free agent in the summer. Also there is the question of whether or not Dnipro will be able to play once again in Dnipropetrovsk in next year’s European competitions.

That said Dnipro’s prospects were not much better this season, and perhaps they can once again show Europe that Ukraine’s football is much more than Shakhtar Donetsk and Dynamo Kyiv.