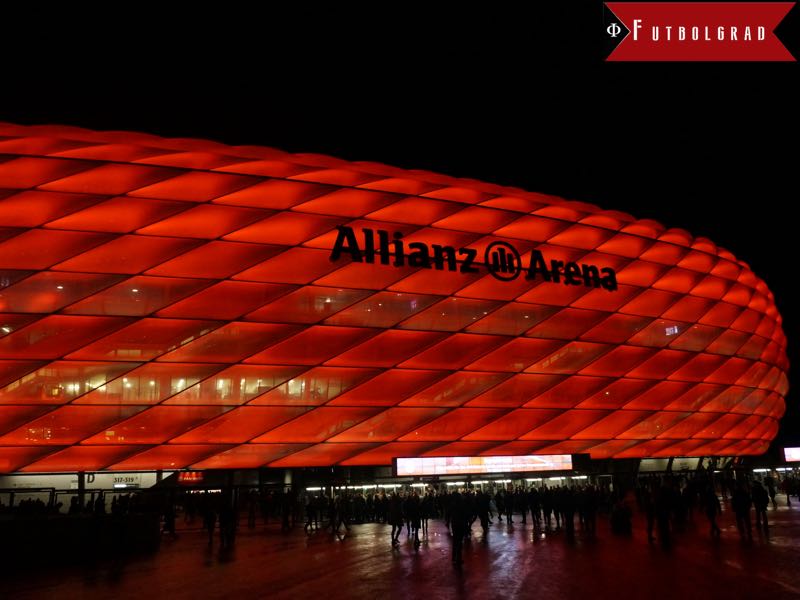 Futbolgrad’s European Football Roundup is coming from Munich’s Allianz Arena this week, as we take a closer look at Oleksandr Zinchenko. Zinchenko continues to struggle to find his way in PSV Eindhoven’s starting line-up. The young Ukrainian national team player was bought by Manchester City this summer, but immediately loaned out to the Dutch club PSV Eindhoven to gain much needed playing time.

Futbolgrad was in the Allianz Arena on Wednesday when FC Bayern München hosted PSV Eindhoven on matchday three of the UEFA Champions League group stage. But Zinchenko was absent from Phillip Cocu’s starting line-up against Bayern.

Instead Zinchenko came on in the 85th minute. Moments before Arjen Robben had scored Bayern’s fourth goal to make it 4-1 for the Germans. Perhaps not the most memorable Champions League debut for the young Ukrainian.

Cocu, however, has good reasons to wait when it comes to integrating the quick Ukrainian, who can play both on the wing, and also in central midfield into PSV’s line-up. After two consecutive Dutch Eredivisie titles, PSV Eindhoven has struggled this season.

PSV are only fourth after matchday nine of the Eredivisie, and are already nine points off league leaders Feyenoord. Things are not much better in the Champions League, as PSV are third with one point out of three matches so far.

Cocu is therefore currently struggling to establish a starting eleven that can salvage PSV’s season both in the Eredivisie, and in the Champions League.

But perhaps long-term Zinchenko could be just the player to steady the ship. Cocu usually prefers using a 4-3-3 formation, but against Bayern he chose the more defensive 4-2-3-1 formation with Luciano Narsingh on the left wing, and Gaston Pereiro on the right wing.

Zinchenko could be utilized in that formation by playing on the right wing where Pereiro in particular remained ineffective in Munich. Another option would be to have Zinchenko included either on the wing or in a three men midfield in Cocu’s preferred 4-3-3 formation.

Regardless the night in Munich highlighted that PSV Eindhoven are still very much looking for a perfect starting formation this season. Zinchenko certainly has the technical ability, and the speed to make a team better. But the question is whether the 19-year-old Ukrainian would benefit from being included in a squad that is still looking for an identity this season.

#Konoplyanka pounced on a half-cleared ball and fired a thundering volley past the goalkeeper from the edge of the box! #KRDS04 0-1 pic.twitter.com/2kiPlCtE3Q